With Wilson playing this well Seahawks can hide their flaws 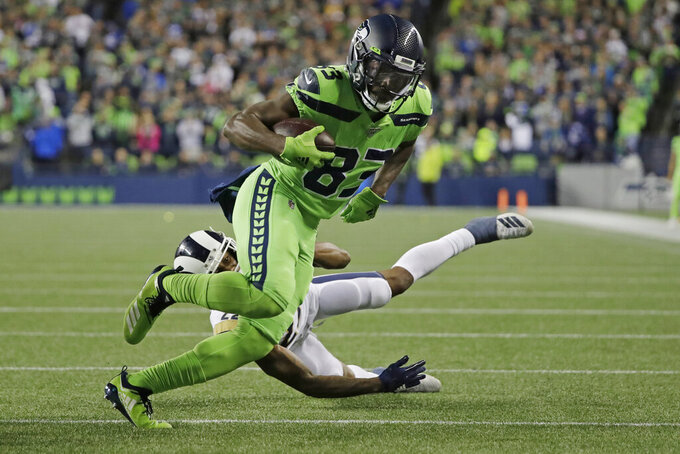 He's done it throughout his career since arriving in Seattle. If the offensive line wasn't playing at its best, or the run game was stagnant, Wilson found a way to make up for it in some capacity. It's partly why the Seahawks have been so successful during his previous seven seasons.

But there's something different about Wilson this year. His play has elevated, again. Wilson is playing with an efficiency that's hard to match and if it continues at this level, he'll find himself in the MVP conversation.

And the latest example of just what Wilson means to the 4-1 Seahawks may be one of the best performances of his career.

Wilson wasn't perfect in Seattle's 30-29 win over the Los Angeles Rams on Thursday night. But no one on the field had a greater impact. That's usually the case for most quarterbacks, but whether it was using his feet to escape the clutches of Aaron Donald and others, or making the correct read and a timely throw, Wilson's night against the Rams may be hard to top.

He threw four touchdowns on just 23 pass attempts. He averaged 15.8 yards per completion, while adding another 32 yards rushing. Wilson has 12 touchdowns and zero interceptions through five games. He is finding ways of making plays out of nothing. His TD pass to Tyler Lockett was the best example . It appeared Wilson's only option was throwing it into the first row of the stands, only to pick out a small sliver of space and allow his wide receiver a chance to make a remarkable toe-tapping catch.

It was one highlight in a night full of them.

"I know a lot has been said about his performance thus far this season, but he's been doing this every year," Seattle's Duane Brown said. "He's just amazing."

Remaining confident in Chris Carson despite fumbling issues in the first three weeks has paid off. In the span of five days, Carson rushed for 104 yards against Arizona and had 118 yards rushing on 27 carries against the Rams. It was a heavy load in a short period, but reinforced how important Carson is to what Seattle wants to be offensively.

He also scored the winning touchdown on a fourth-and-goal play in the closing minutes.

In both halves, Seattle's two-minute defense was ripped apart. Jared Goff was 6 of 8 for 50 yards and was helped by a roughing-the-passer call on the final drive of the first half that was capped by a 9-yard TD pass to Cooper Kupp. Then after Seattle had to punt back to the Rams with 1:38 remaining in the fourth quarter, Goff completed 6 of 9 passes for 77 yards to get Los Angeles in position for Greg Zuerlein's field-goal attempt that missed with 11 seconds left.

They were obvious passing situations with time dwindling, but Goff was a combined 12 of 17 for 127 yards over the two possessions.

"It was frustrating it didn't work out exactly the way we wanted it to. They had something to say about that," Seattle coach Pete Carroll said. "They changed some things and we had to fix them. I think both the two-minute drives bothered me. ... Those are things I think we can fix and we learned something."

Who knew that Jamarco Jones could play guard? Not even Jones, apparently. Never asked to play the position before at any level of football, Jones was thrust into action on Thursday night after D.J. Fluker was lost to a pulled hamstring. Jones has been an offensive tackle throughout his football career, but started to get worked in a little at guard in practice the past few weeks just in case he was needed.

Turned out he was. And his first task was facing the Rams' stout defensive front that was causing Wilson problems from the start. Carroll came away impressed with what Jones was able to do in a difficult situation.

The former fifth-round pick out of Ohio State missed all of last season with a knee injury.

Seattle's rookie class — outside of DK Metcalf — is struggling to get on the field. First-round pick L.J. Collier, second-rounder Marquise Blair, fourth-rounder Gary Jennings and seventh-rounder John Ursua all were inactive against the Rams.

Fluker will be out a while, although Carroll didn't have a timeline. Typically it's been Ethan Pocic taking over, but he missed Thursday's game with a lingering back injury that forced Jones into action. With the way Jones played he could end up being interim starter for Fluker.

19 — In the past 19 regular-season games, Wilson has thrown 42 touchdowns and only four interceptions. He threw three interceptions in the first two weeks of last season, but since has been incredibly efficient at not making mistakes in the passing game. Not including games of this week, Patrick Mahomes is the only player with more TD passes during that span with 50, but has also thrown 12 interceptions. Matt Ryan has 41 TD passes and 11 picks.

The Seahawks get a long weekend of rest before a stretch of five games that feature three on the road and two long trips back East. The Seahawks have road trips to Cleveland (Oct. 13) and Atlanta (Oct. 27) sandwiched around a home game against Baltimore.