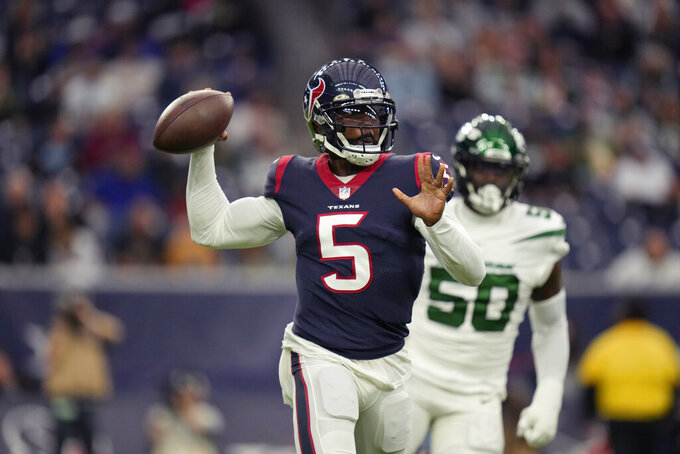 HOUSTON (AP) — Zach Wilson wasn't satisfied with his game against the Houston Texans in his return from injury Sunday.

The rookie is, however, glad he'll get to work on getting better this week with another win under his belt after his team picked him up to lead the New York Jets to a 21-14 win.

Wilson threw for 145 yards and ran for a touchdown in his return from a sprained right knee, helping the Jets snap a three-game skid.

“I wasn’t happy with how I performed, the ups and downs of it all," he said. “But I've got to keep going. This is all part of the process. It feels really good having a win. That’s the goal is to win the game. I’m really happy we were able to pull it out."

Wilson, the No. 2 overall pick in April who missed the last four games, was rusty early and threw an interception but put the Jets (3-8) on top with a 4-yard scamper in the third quarter.

“Obviously, there’s a little rust there after a month," coach Robert Saleh said. “I thought he managed the game well. The offense was running the heck out of the football. He was doing a good job on third downs. It was just a good day of managing the game."

Wilson wouldn't use rust as an excuse for his performance, but did say he tweaked his knee a couple of times on runs during the game.

“It’s not fully healed, and we understand that, but I feel good to play, so that’s why I’m playing," he said. “I understand that sometimes it’s going to shift and stretch a little bit, but there’s no damage that could come from that. You have to walk it off and move on."

The Jets converted two fourth-down attempts on a drive that ended with a 37-yard field goal by Matt Ammendola that made it 21-14 with about 3½ minutes to go.

The Texans (2-9) hoped to build on an upset of Tennessee last week that ended an eight-game skid and looked good early. Tyrod Taylor threw two touchdown passes in the second quarter to give Houston 14-3 lead, but the Texans couldn’t do anything offensively after that.

Houston had a chance to tie it after Ammendola’s field goal, but Bryce Hall knocked down a pass intended for Nico Collins on fourth-and-2 to give New York the ball back. The Jets worked the clock down and the Texans didn't get the ball again until there were just 20 seconds left.

Taylor threw for 158 yards with two touchdowns and an interception.

The Jets took an 18-14 lead with about eight minutes left in the third quarter, thanks in part to a pair of huge penalties by Houston defensive tackle Ross Blacklock.

“Very disappointed," Culley said, “We talked about not having critical penalties, but that's part of it. ... He's just got to get better with that."

Wilson scrambled for the score on the next play to put New York on top.

The Jets had a chance to pad the lead early in the fourth quarter, but Ammendola’s 42-yard attempt sailed wide left.

The Texans got great field position on their next drive after the Jets punted out of the end zone. But they couldn’t move the ball and came away empty when Ka'imi Fairbairn missed a 55-yard field goal with about 10 minutes to go.

Houston played without top defensive player safety Justin Reid, who was inactive because of a coach’s decision related to a violation of team rules.

John Franklin-Myers batted down a pass by Taylor and intercepted it on Houston’s first drive. He returned it 32 yards to the Houston 37. Jacob Martin sacked Wilson for a 9-yard loss on third down and the Jets settled for a 31-yard field goal to make it 3-0.

Wilson threw a short pass into Ty Johnson’s back and Tavierre Thomas snagged it just before it hit the ground for the first interception of his career later in the first quarter.

Houston took advantage of the miscue when Taylor connected with Brevin Jordan on a 13-yard touchdown pass that made it 7-3 early in the second quarter.

The Texans extended the lead to 14-3 when Brandin Cooks hauled in a 40-yard reception in the end zone with about 10½ minutes left in the second quarter.

Austin Walter scored on a 2-yard run with about a minute left in the first half. Backup quarterback Josh Johnson, who was called up from the practice squad for the game with Mike White and Joe Flacco on the COVID-19 list, took a direct snap and ran for the 2-point conversion to cut the lead to 14-11.

Texans: OL Justin McCray left in the third quarter to be evaluated for a concussion. ... DT DeMarcus Walker left in the fourth quarter with a hamstring injury.

Saleh on Franklin-Myers, who was signed to a four-year, $55 million contract extension last month: “He’s worth his weight in gold, JFM is. Much given, much expected, right? He knows the standard that he has."