Wilson's return could be spark, but Jets need more solutions 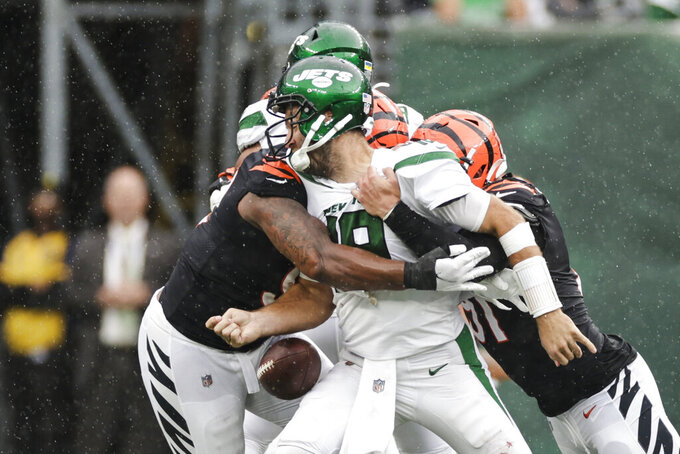 NEW YORK (AP) — Zach Wilson is on his way back to leading the New York Jets' huddle.

It could be this week, or maybe next week — Robert Saleh wasn't sure yet what the doctors will say. But the key thing is it's soon, and that's good news for everyone in the franchise.

“I think it's going to bring some motivation,” linebacker C.J. Mosley said Monday. “Zach's ready to get back out there and he's been ready this whole offseason. It was unfortunate with the injury and all.”

Wilson bruised a bone in his right knee during the preseason opener at Philadelphia on Aug. 12 and needed arthroscopic surgery on a torn meniscus. The Jets have been ramping up his activities the past two weeks, with the goal for Wilson to be back — at the earliest — Sunday at Pittsburgh.

“We're looking for confirmation,” Saleh said. “Once Zach's doctors clear him, he'll be ready to roll. I can't really define that until we get clearance from them.”

That will come, Saleh said, in the next 24 to 36 hours. Then the 1-2 Jets will know if they'll trot out Joe Flacco for another game, or if Wilson will finally begin his second NFL season.

From the moment last season ended, this season has been all about how Wilson progresses and develops. That was put on pause because of the knee injury, but he'll get the chance to give the Jets a better feel if he is — or isn't — the quarterback of the future.

He was viewed as somewhat of a savior when he was drafted second overall last year. There's a bit of that feeling again with the Jets struggling to consistently be effective on offense.

Wilson could certainly be a spark. But New York has a laundry list of issues — on offense and defense — that need to be fixed before this season flames out.

This seems like a trick question because it's tough to find something that fits after the Jets' 27-12 loss Sunday. But let's go with the spin on the team making critical mistakes.

“They’re going to go away as time goes,” Saleh said. "Part of it is crappy luck.”

This could take a while. Between the missed tackles, poor protection by the offensive line, missed receivers by Flacco and a few mental mistakes by veterans, the list is lengthy.

But the defense's inability to get off the field on third down against the Bengals was a killer. Cincinnati went 7 for 14 in those situations, highlighting what has been a weakness for New York through three games. Of the 10 touchdowns the Jets have given up in three games, seven have come on third down.

“Our first- and second-down defense has been pretty good,” Saleh said. “Third down, it's, uh ... We gave up all three of our touchdowns on third down. Just critical mistakes at the most inopportune times. ... Third down is an issue that we've got to get fixed.”

Greg Zuerlein. After a shaky start to his stint with the Jets, “Greg the Leg” has been reliable — and from long distance. He missed a 45-yard field goal and an extra point in the opener, but is 6 for 6 on field-goal attempts since and made all four of his extra points. He accounted for all of New York's scoring against Cincinnati with four field goals Sunday. Zuerlein is also 3 for 3 from 50 yards or greater, becoming the first Jets kicker to have multiple makes from that distance in the first three games.

The offensive line. The big guys up front allowed four sacks, including two strip-sacks of Flacco, and nine pressures against Cincinnati. There were concerns coming into the season about how the line would jell after dealing with injuries and a lack of time together, and they seem to have been warranted.

LB Quincy Williams will be week to week with a high ankle sprain, which is relatively good news after he was carted off the field with what appeared to be an even more severe injury. ... LT George Fant has a knee issue that has been bothering him and might need to sit out a week. Saleh said the Jets will know more as the week goes.

22 — The number of seconds the Jets have held a lead this season. And that was only because Flacco pulled off that 13-point comeback in the final moments of the win at Cleveland last week.

Normally, the fourth game of the season is way too early to be considered a must win, especially when it's at Pittsburgh. But the Jets are facing a very beatable Steelers team and could get back to .500 before facing what now appears a brutal stretch on the schedule before their bye: home vs. Miami, at Green Bay and Denver, and home vs. New England and Buffalo.