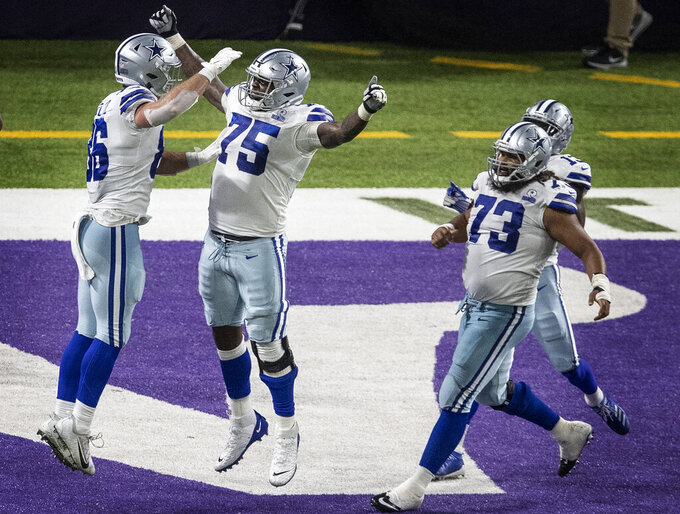 Andy Dalton’s first win as Dallas quarterback puts the Cowboys in a suddenly high-stakes Thanksgiving game in a season that looked lost without Dak Prescott.

Dallas has the woeful NFC East to thank for the chance, and feels no shame in wanting to take advantage after beating Minnesota 31-28 to end a four-game losing streak.

The Cowboys and Washington are 3-7 going into Thursday, part of a three-way tie with the New York Giants for second, or last, or however someone wants to view it in a division in which all four teams have three victories after Week 11. Philadelphia leads at 3-6-1.

“This will be our first opportunity really to stack the steps,” said coach Mike McCarthy, whose first season with the Cowboys has been marked by one challenge after another, the biggest losing Prescott to a season-ending ankle injury in Week 5.

“It took us a little longer to get here today. I clearly think the journey will make us stronger. We need to do something with this win. It needs to mean something.”

The four straight losses were all four games since Prescott's gruesome injury. Dalton missed the last two of them, first with a concussion, then because of a positive test for COVID-19.

A nine-year starter who won 70 games in Cincinnati before deciding to join the Cowboys as Prescott's backup, Dalton led a fourth-quarter comeback to beat the Giants immediately after the injury.

Against the Vikings, he took Dallas 61 yards to the go-ahead touchdown with less than two minutes remaining. And a much-maligned defense made the stop that turned Dalton Schultz's 2-yard catch into the winning score.

“We’ve been putting in the work and showing signs that we’ve become a better football team,” linebacker Sean Lee said. “To rally the way we did coming down the stretch was incredible.”

Ezekiel Elliott had his first 100-yard game of the season (103) and scored on a 6-yard screen pass, and the Cowboys had a season-high 180 yards rushing. Backup Tony Pollard's 42-yard run was the first of two go-ahead TDs in the fourth quarter.

The Dallas cornerbacks had some rough moments and might have lost Anthony Brown to a rib injury again. While Jourdan Lewis had a crucial breakup on Minnesota's final possession, the position is likely to get picked on if the Dallas run defense continues a steady improvement.

CeeDee Lamb's body-bending touchdown catch in the first half was the highlight of what had the feel of a breakout game for the rookie receiver. The numbers weren't huge (four catches for 34 yards), but Lamb absorbed a couple of huge hits, drawing a penalty on one. The first-round draft pick averaged 16 yards on three punt returns.

The coaching staff has been slow on some personnel changes, the latest being four-time All-Pro right guard Zack Martin's move to right tackle to replace Terence Steele. The struggling undrafted rookie started the first nine games with both tackles (Tyron Smith and La'el Collins) out for the season with injuries.

Dallas responded with its best game on the ground this season, and Dalton was sacked just once, with the quarterback taking the blame because he said he held the ball too long.

Safety Donovan Wilson, who forced two fumbles against the Vikings, didn't start until Week 5 at a position the Cowboys have had trouble solving. And Dallas stuck with nose tackle Dontari Poe all the way through a stretch of allowing at least 200 yards rushing in three out of four games before releasing him.

Brown missed three games early in the season after injuring his ribs in practice. If he's out an extended time again, the Cowboys will be digging deep in the depth chart at cornerback.

While Chidobe Awuzie returned from a seven-game absence because of a hamstring injury, Dallas had to elevate Rashard Robinson from the practice squad and give him 18 snaps in his first action in two years.

45 and 10 — Elliott has 45 touchdowns rushing and 10 receiving in his first five seasons. The two-time rushing champion is the fifth back to do that, joining Pro Hall of Famer Marcus Allen, Shaun Alexander, Chuck Foreman and Todd Gurley.

The stakes are a little higher for the Cowboys on Thursday because they lost at Washington, when Dalton was knocked out of the game with a concussion. A season sweep would give Washington a significant advantage in what figures to be a wild scramble for the playoffs in the NFL's worst division.