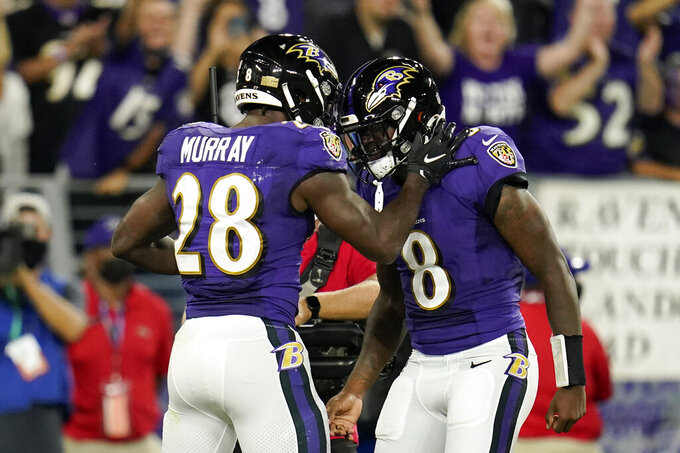 Baltimore Ravens running back Latavius Murray (28) celebrates his touchdown with quarterback Lamar Jackson in the first half of an NFL football game against the Kansas City Chiefs, Sunday, Sept. 19, 2021, in Baltimore. (AP Photo/Julio Cortez)

OWINGS MILLS, Md. (AP) — Lamar Jackson flipped into the end zone and then launched the ball high in the air in celebration.

It was only Week 2, but this victory was quite a step for Jackson and the Baltimore Ravens.

After losing to Kansas City each of the past three seasons, the Ravens finally topped the Chiefs 36-35 on Sunday night. Moreover, Baltimore did it with a banged-up roster that looked significantly different from what the Ravens planned to start the season with.

After a loss in the opener at Las Vegas, this game re-established Baltimore as a serious contender, injuries and all.

“Our team is strong. We’re together,” Jackson said after the game. “We know where we can be at, and we showed a little bit tonight.”

Given all the adversity the Ravens (1-1) have already faced, it was fair to wonder if this team could really dream big this year. At the very least, it seemed Baltimore would need Jackson to be at his absolute best to beat teams such as Kansas City — but that wasn't really the case.

Jackson threw two first-quarter interceptions, one of which was run back for a touchdown, but Baltimore was able to stay in the game anyway. Jackson was sharp after those early mistakes, throwing a 42-yard touchdown to Marquise Brown on a jump-pass in the third quarter, then running for two TDs in the fourth.

That was enough for him to beat Patrick Mahomes and the Chiefs.

“It feels good to get that monkey off of our back. It just feels good,” Jackson said. “We’ve got to move on to Detroit now. We didn’t win the Super Bowl yet. It’s just one game.”

The Ravens lost their top two running backs to preseason injuries and ran for 251 yards against the Chiefs anyway. Jackson's mobility obviously helps the ground game, and offensive coordinator Greg Roman deserves credit for establishing a running attack that can still excel under these circumstances.

“We have a philosophy. We have some principles that we believe in,” coach John Harbaugh said Monday. “Greg's author of the system. He's been building the system for many years, so we've built on that even more.”

It's not easy against a team such as the Chiefs, but the Ravens had some problems with open-field tackling that turned a couple of medium-range passes into long touchdowns.

“It was spotty in certain times,” Harbaugh said. “The two big plays, we missed 10 tackles on.”

Decision-making on fourth down. Baltimore went for it on fourth-and-1 from its 43 with 1:05 remaining. A first down would have wrapped up a win for the Ravens, but if they'd been stopped, there's a good chance they would have lost.

There are plenty of good arguments for going for it in this situation, but the simplest one is probably this: The Ravens had a better chance of beating Kansas City's defense than Kansas City's offense.

Jackson ran for 2 yards and a first down, and that was that.

Decision making on 2-point conversions. After scoring a touchdown to pull within five points early in the final quarter, the Ravens had a successful 2-point conversion called back because of a flag. After the 5-yard penalty, they decided to go for 2 again and failed, leaving the score at 35-30.

After the go-ahead touchdown, Baltimore went for 2 again and missed. Had the Ravens simply kicked the extra point both times, they could have led by three instead of one at the end — and that difference nearly proved decisive.

8:02 — The time elapsed on Baltimore's go-ahead drive in the fourth quarter, which ended with Jackson's TD run and flip into the end zone. The Ravens gained 68 yards on 14 plays and converted three third downs. On two of those third-down conversions, it was third-and-1. The Chiefs weren't able to put Baltimore in any really bad spots during that drive.

The Ravens play their next two games on the road, starting this weekend at Detroit. It's Baltimore's first visit to the Motor City since 2013, when Justin Tucker won the game for the Ravens with a 61-yard field goal.