Winless Colts trying to turn around season without Wentz 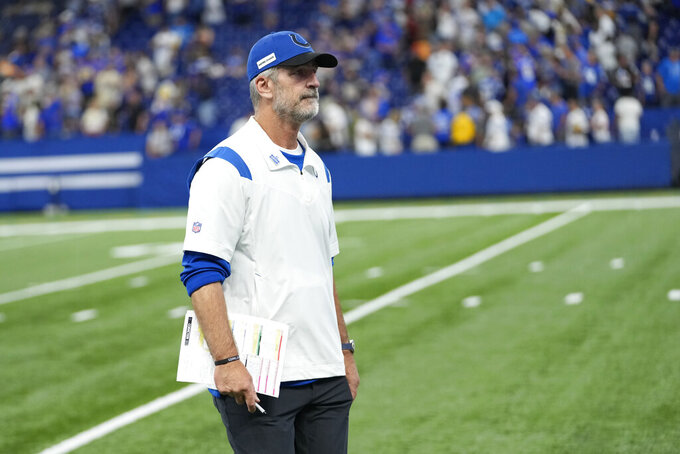 A rare 0-2 start already is threatening to derail those plans.

The Colts have lost two home games, are about to embark on a brutal three-game road trip starting next weekend at Tennessee and will likely need second-year quarterback Jacob Eason to deliver a victory just to avoid their first 0-3 start in a decade.

“The mountain is unforgiving," coach Frank Reich said after Sunday's 27-24 loss to the Los Angeles Rams. “It’s unforgiving when you’re up there and you make a mistake or two and it’s going to cost you. We’ve got to collectively do better coaching, playing, every aspect of the game. We’ve got to be better against a good football team."

So far, their best-laid plans have gone awry.

An offensive line considered one of the league's best each of the past three seasons has struggled early without longtime left tackle Anthony Castonzo. A defense that thought it would be one of the NFL's best, has allowed 27.5 points per game. Reich's run-first approach has been mostly grounded, too, and the Colts' offense in the red zone has produced only three touchdowns in eight trips.

And with the uncertainty surrounding starting quarterback Carson Wentz, who sprained both ankles Sunday, a bleak picture certainly could get much worse quickly.

“Every week’s urgent and then you add a division game to the mix and that adds urgency to it and then you want to get in the win column to start that trend, too," tight end Jack Doyle said Monday. "But you don’t press. You go through the process that you know works and everything will fall into place."

Even amid all the warning signs, the Colts know all is not lost.

Indy is one game out of the AFC South lead and beating the Titans could give them a leg up in the title chase.

The first two losses also came against NFC contenders, which may not be as debilitating in tiebreaking scenarios and with 15 games left and a potentially easier final two-thirds of a schedule, the Colts know there's plenty of time to right the season.

The passing game. After missing almost all of training camp, the entire preseason and the first week of regular-season prep work, Wentz has appeared increasingly in command of the offense despite being under an unusual amount of pressure.

Offensive line. The return of two-time Pro Bowler Eric Fisher provided a major upgrade at left tackle, but the Colts missed injured right tackle Braden Smith (foot). Wentz has been sacked six times and taken 21 quarterback hits in the first two weeks and the ground game has been terrible in short-yardage situations.

Michael Pittman Jr. The second-year player caught eight passes for 123 yards Sunday, both career highs. It was the second 100-yard game of his career. Expect Pittman to emerge as the featured receiver over the next few weeks.

Nyheim Hines. After a strong start, Hines played a bit role this weekend. He had one carry for 5 yards and only caught one of the two passes thrown his way for 17 yards. When the Colts offense is clicking, Hines is a key cog.

Wentz's injury is the most significant heading into Week 3. But getting Smith back would give the Colts their projected starting offensive line for the first time this season. It's also unclear how much more time receiver Parris Campbell will miss because of his abdomen injury.

3.96. Reich takes great pride in being a run-first team. But so far this season, the Colts are averaging just 3.96 yards per carry and their top back, Jonathan Taylor, has 107 yards on 32 carries for an average of 3.34.

Now that the Colts know Wentz's injury status they must figure out what's wrong with the offensive line, the offense in the red zone and a defense that has underperformed through the first two weeks.