Winless Jets up against odds with road game at Chiefs next 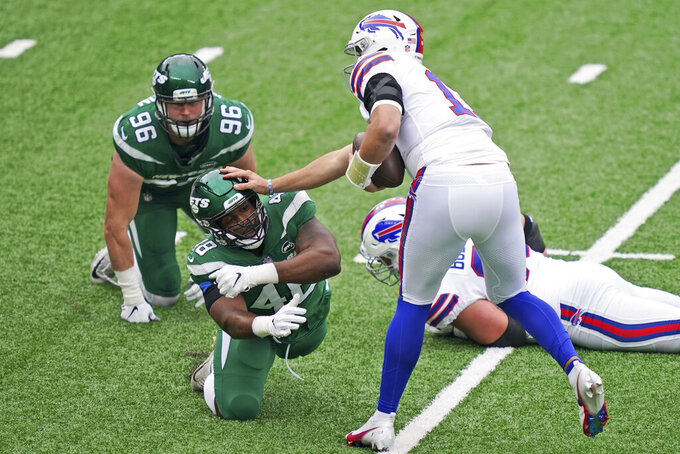 NEW YORK (AP) — Take a short timeout and pretend for a moment you're a player or coach on the New York Jets.

No, that's not meant to ruin your day.

You might actually feel better about your own situation after considering the brutal reality for the Jets. They're the NFL's only winless team at 0-7, they're desperately searching for answers, and there are questions about the future beyond this season for coach Adam Gase, quarterback Sam Darnold — and just about everyone else in between.

Oh, and up next: a road game against Patrick Mahomes, former Jets running back Le'Veon Bell and the defending Super Bowl champion Kansas City Chiefs.

“I don't know about extra motivation, but it's definitely motivating in and of itself,” guard Greg Van Roten said Monday. "There are a lot of guys in this league, myself included, that no one gave a chance to be in the NFL, and now I'm going into my ninth year of professional football.

“So, I'm not a big believer in, ‘Oh, there’s no chance you win this game.' ... I don't think anybody's going to shy away from this opportunity."

Certainly not those who like to gamble on football games. The Jets opened as a 20-point underdog, and it might as well be twice that since no one outside the team's facility expects them to walk out of Arrowhead Stadium with anything other than an 0-8 record.

“We have a great test this week to see what we're made of," Van Roten said. "Our record is what it is. That's who we are right now. We have a chance to go play a really good team at home that won the Super Bowl last year.

"And if you can't get excited about that, if you can't find a way to get up for that game, then there's something wrong with you.”

That certainly sounds good, but the Jets have done little to inspire any visions of an upset. It appeared New York had a shot at its first victory Sunday against Buffalo — until the offense stalled again and the Jets fell 18-10.

“We just didn’t have enough plays in the second half,” Gase said. “The first half is more what we’re looking for and we've just got things we got to get cleaned up.”

The Jets were the first team this season to not allow the Bills to score a touchdown, an impressive accomplishment considering how prolific Josh Allen and Buffalo had been.

The Bills were also 0 for 5 in the red zone, with the Jets' defense tightening up. The problem, though, was still too many chunk plays that helped put Buffalo in position to get six field goals — the difference in the game.

“Keeping them out of the end zone was definitely a plus," safety Marcus Maye said, "but we've just got to figure out how to win the field position battle.”

The leaky offensive line. After missing two games with a sprained right shoulder, Darnold was sacked six times and faced constant pressure. That helped result in the Jets gaining just 4 total yards in the entire second half.

GM Joe Douglas tried to improve the line in the offseason with four new starters from the end of last year, but the unit has performed just as poorly at times. Van Roten said Darnold isn't getting “a chance to show what he can do” because he's being given no time up front.

“We need to be ruthless with our attention to detail and how we apply technique,” Van Roten said. “If you watch the film, individually, guys are playing pretty well. It's just collectively, we're not.”

Denzel Mims. The second-round pick out of Baylor had four catches for 42 yards in his NFL debut, showing glimpses of being a potential playmaker. Mims missed the first six games after injuring both hamstrings in training camp.

Darnold. Despite the line's issues, the third-year quarterback continues to make crucial mistakes. His interception late in the first half — “a terrible mistake,” he called it — flipped the momentum, leading to a Bills field goal that cut the Jets' lead at halftime to 10-6.

While Darnold has shouldered the blame, Gase refuses to dump it all on the quarterback.

“What I see in practice, I see things that are better than last year,” the coach said. "We’ve just got to figure out ways to protect him, let him get in a rhythm.”

Gase confirmed DL Kyle Phillips is out for the season with an injured left ankle that he'll have surgically repaired. The Jets claimed DE Daeshon Hall off waivers from Philadelphia to help fill the void. Hall, a 2017 third-rounder by Carolina, has 1 1/2 career sacks. ... LB Jordan Jenkins has a rib injury. Gase said he should be OK to play Sunday, but it'll be a pain tolerance issue. ... WR Breshad Perriman is in concussion protocol. ... WR Jamison Crowder and K Sam Ficken were being evaluated for groin injuries that kept them out against Buffalo.

4 — The Jets' total yards in the second half were the fifth fewest by any team in the third and fourth quarters since 2000.

Gase handed off the offensive play-calling duties to coordinator Dowell Loggains last week, and the two are discussing how they'll approach the preparations for this week. Either way, the Jets are going to have to come up with a much better plan against the high-scoring Chiefs or it could get ugly before the end of the first quarter.