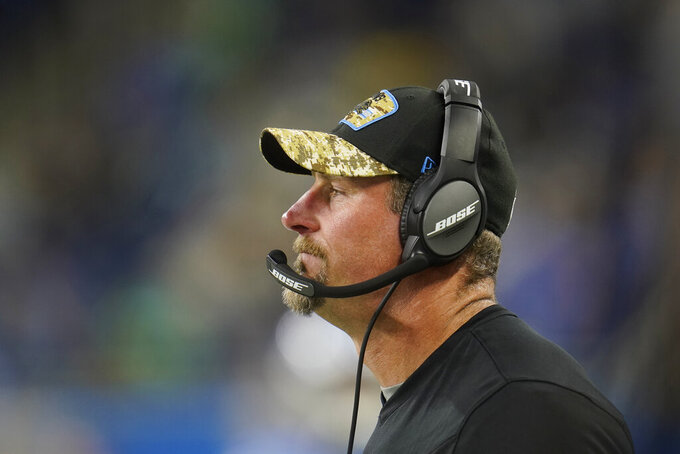 Detroit Lions head coach Dan Campbell watches from the sideline during the second half of an NFL football game against the Philadelphia Eagles, Sunday, Oct. 31, 2021, in Detroit. (AP Photo/Paul Sancya)

Dan Campbell spent much of last week scouting his own winless team, searching for the good, bad and ugly the Detroit Lions put on film while opening the season with a string of setbacks.

“There is a lot of young talent on this team when you go back and just dive into the last eight weeks that you see improvement," Campbell said Monday, coming off the team's bye.

“And look, the hard thing right now is the fact that what happened (against) Philly puts a bad taste in everybody’s mouth and it does ours, too.

“But when you do go back and you kind of step back and look at it in its totality, you do see improvement out of young players.”

Detroit was drubbed by the Eagles 44-6 on Oct. 31 in its previous game.

The Lions (0-8) will get another chance to avoid being the NFL's only winless team on Sunday against Pittsburgh on the road.

“Definitely looking at it like a new season," rookie receiver Amon-Ra St. Brown.

While the Lions have lost every game they've played, former quarterback Drew Stanton said people throughout the organization have told him that Campbell has not lost the respect of players in the locker room.

“That’s good, but I wouldn’t think that I would either," the first-year coach said. “Look, nobody wants to be in a position we’re in. But I go back to this, it’s more about the guys we have here."

D'Andre Swift has been a bright spot, leading all NFL running backs with 47 receptions and ranking second at the position with 415 yards receiving. Swift, drafted in the second round in 2020, has scored five touchdowns to more than double the total of any teammate.

On both sides of the ball, Detroit is among the league's worst in the red zone and that stood out to Campbell as he studied the team's first eight losses.

“It’s still something that is pretty glaring," he said.

Kalif Raymond has gone from being an NFL journeyman to becoming perhaps Detroit's best receiver. The 27-year-old Raymond has 26 receptions for 334 yards and two scores. He entered the season with no more than nine receptions in any of his four seasons with Denver, both New York teams and Tennessee.

Detroit has struggled to throw deep all season and Campbell said the team is determined to change that.

Jared Goff is averaging 9.7 yards per completion, tying him for 31st in the NFL.

“We’ve got to push the issue, which starts with us because Goff will do what we’re asking him to do,” Campbell said. “And, he’s certainly got the arm and accuracy to do it.”

OT Taylor Decker has been out all season with a finger injury, but Campbell sounds as if the veteran is eager to get back on the field. The team took him off injured reserve, giving him a chance to return.

“I looked at him and he had the right look in his eye and I know he’s ready to go," Campbell said. “I can tell that he’s excited about jumping in there and starting to rep, rep at the left tackle position."

Win. Detroit is desperate for a victory and it might be an underdog in every game. The Lions have road games left against Pittsburgh, Cleveland, Denver, Atlanta and Seattle. Detroit, without much fan support, hosts Chicago on Thanksgiving and also plays Minnesota, Arizona and Green Bay at Ford Field.