Winless Lions drawing comparisons to their 0-16 team in 2008 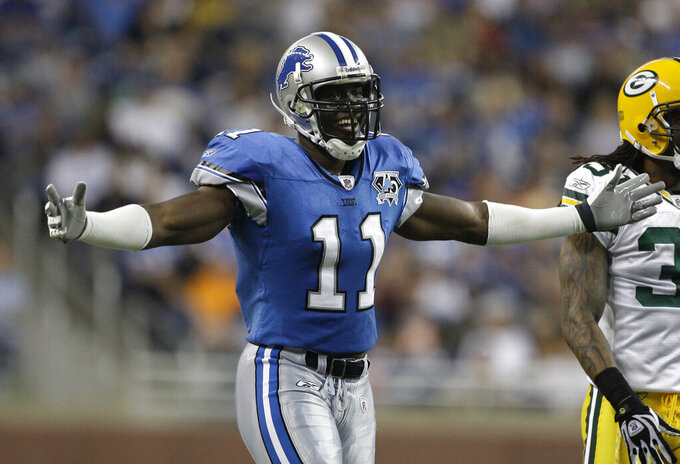 FILE - Detroit Lions wide receiver Roy Williams questions an official during the team's NFL football game against the Green Bay Packers in Detroit on Sept. 14, 2008. Williams was traded by the Lions five losses into the 2008 season and the former receiver was not surprised they ended up becoming the NFL's first 0-16 team. Williams says the writing was on the wall. (AP Photo/Paul Sancya, File)

Roy Williams was dealt by the Detroit Lions five losses into the 2008 season and the former receiver was not surprised they ended up becoming the NFL's first 0-16 team.

“The writing was on the wall,” Williams recalled earlier this week.

Some, including one current player, are saying the Lions may make history again by becoming the league's first 17-game loser.

“If this doesn’t get better, we’re going to be 0-17,” Detroit safety Tracy Walker said following last Sunday's 44-6 loss to Philadelphia.

Only one thing is for sure: Detroit will not lose this week.

The Lions (0-8) have a bye and return to play at Pittsburgh on Nov. 14, when they hope to avoid being the NFL's only winless team.

“Guys need to kind of get away from the game," defensive end Nick Williams said. “Refocus, refuel and think about what they want be known as in the later part of the season when we get back.”

Dan Campbell, in his first year as a coach for a franchise he played for from 2006-08, insisted he's not using the possibility of being 0-17 to motivate his players to avoid the dubious distinction.

“You can’t think like that and we’re not going to let them think like that,” Campbell said. “All we’ve got to worry about is, `How do we go into this game, for example, in two weeks and we beat Pittsburgh?'

“That has got to be our sole focus. You can’t think of anything else.”

Thirteen years ago, the Lions were thinking and saying a lot of things behind closed doors.

Roy Williams and former quarterback Drew Stanton both said then-offensive coordinator Jim Colletto was simply over his head and that played a part in dooming any chance Rod Marinelli had of having success as a head coach for the first and only time of his career.

“Jim Coletto, his offense was more basic than a sixth-grade youth football team,” Roy Williams said. "There was no hope. Going to that from Mike Martz's 250 plays was hard: 250 plays to literally 27.

“Whoever made that hire messed everything up. Marinelli had no chance in hell.”

Stanton said during a loss at Houston, after the offense had already run all of its plays for third-and-10 — or longer — Colletto was lost.

“He said, `What category do I go to now?'” Stanton recalled. "If it wasn't on the script or call sheet, he could not deviate.

“I've tried to wipe it from my memory it was so bad. It's making me have PTSD."

Back then, the Lions were mired in the worst eight-season stretch in the NFL since World War II because the Matt Millen-led front office drafted busts in the first round and failed to find many players elsewhere in the draft. Millen, who was 31-84 as general manager, was finally fired after the team opened 2008 by getting routed three times and having Bill Ford say he would he would make significant changes if he had the authority. His father, the late William Clay Ford, made the move too late to fix anything that season, and the damage lingered for years.

The current Lions, even if they fall to 0-17, are not expected to make major changes because Campbell and general manager Brad Holmes are in their first year. It's not their fault that former general manager Bob Quinn and coach Matt Patricia left behind a mess in the Motor City.

In a comparison between the two teams, the 2008 team went through three starting quarterbacks and played two others at the pivotal position. The current squad has started quarterback Jared Goff in every game and his job appears to be safe.

Holmes acquired Goff and a pair of first-round picks from the Los Angeles Rams for Matthew Stafford, whom Detroit drafted No. 1 overall in 2009 after its winless season.

It also appears, so far, that the Lions respect Campbell and his assistants, unlike the 2008 team's relationship with its coaches.

“The 2008 team was dumpster fire. Rod is such a great man and wanted to right the ship. But he lost the locker room and once you do that, you can never get it back.”

Roy Williams, who gave Hall of Famer Calvin Johnson his Megatron nickname in Detroit, was shipped out of town — and he wasn't the only one.

“If you spoke out to the media, you got put on IR or traded: (Jon) Kitna, myself, (Mike) Furrey, (Shaun Rogers) Big Baby," Williams said. "Kitna went on IR with migraines."

Detroit's headaches do not include dysfunction — yet.

“We’re playing for this great city of Detroit,” NIck Williams said. “There’s no quitters in this city. Nobody’s looking to bash anybody, not sulking. We’re just looking to get better and get this city a win, and wins, with an s. We have talented guys in the locker room.