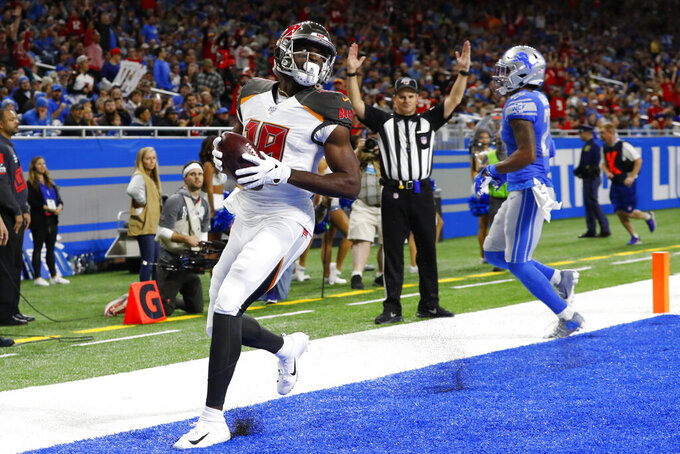 Tampa Bay Buccaneers wide receiver Breshad Perriman (19) crosses into the end zone for a touchdown during the first half of an NFL football game against the Detroit Lions, Sunday, Dec. 15, 2019, in Detroit. (AP Photo/Paul Sancya)

Jameis Winston is building a convincing case for the Tampa Bay Buccaneers retaining him as their franchise quarterback.

The NFL passing yardage leader is in the final year of the contract he signed as the No. 1 overall pick in the 2015 NFL draft, earning $20.9 million while trying to prove he’s worthy of a deal that will keep him with the team beyond this season.

While coach Bruce Arians has said he’ll wait until the end of the season to make a decision, Winston continues to make a strong argument for returning by posting impressive numbers that show what he could be capable of if he ever conquers his penchant for throwing interceptions.

In addition to throwing for a career-high and league-leading 4,573 yards through 14 games, Winston has thrown for a franchise single-season record 30 touchdowns — second in the NFL to Lamar Jackson’s 33.

And while there’s no disputing his NFL-high 24 interceptions are reason for concern, Peyton Manning and Dan Marino are the only quarterbacks who have thrown for more yards through the first five seasons of a career.

And no one had ever passed for 450-plus yards in consecutive games until Winston did it the past two weeks in wins over Indianapolis and Detroit.

“Anytime you start a sentence with, ‘In the history of the NFL,’ it’s big,” Arians said. “And for Jameis I’m really, really happy for us and for him to be able to put his name in the record books.”

The Bucs started quickly against the Lions — building an early 21-0 lead — and finished strong, scoring on defense and offense after Detroit rallied within 24-17. That’s a stark contrast to the first half of the season when they struggled to hold second-half leads.

Winston’s big numbers, particularly the past two games, continue to overshadow the lack of a consistent running game. The Bucs rushed for just 49 yards on 29 attempts, with leading rusher Ronald Jones II averaging 2.1 per carry while gaining 23 yards on 11 attempts. Backup Peyton Barber was even less productive, averaging 1.7 and finishing with 17 yards on 10 carries.

OLB Shaquil Barrett, who has tied Hall of Famer Warren Sapp’s franchise single-season sacks record, is headed for a big payday after signing a one-year, $4 million contract with Tampa Bay in free agency last winter. He leads the NFL with 16½ sacks in his first-year as a full-time starter after having 14 combined with Denver over the first five seasons of his career.

With the Bucs (7-7) riding a four-game winning streak, there’s no clear-cut candidate, though safety Mike Edwards might qualify after twice knocking Sean Murphy-Bunting down as his fellow rookie celebrated returning an interception 70 yards for a touchdown that ended Detroit’s comeback bid.

“I was trying to like, find somewhere to find some fun,” Murphy-Bunting said. “He just kept nagging at me, he was like that annoying kid, like, ‘Hey, hey, hey. Hey!’ He kind of messed it up. It was still fun, though. It was so exciting to see the reaction of everybody.”

WRs Chris Godwin and Scotty Miller have hamstring injuries that could affect their availability this week. Meanwhile, there’s a chance left tackle Donovan Smith could return after sitting out against the Lions due to ankle and knee injuries that ended a streak of 77 consecutive starts.

“Injuries are something that everybody’s got them in December, so it’s never an excuse. It’ll be the next man up,” Arians said. “We’re actively looking at who’s going to be healthy and who is going to be able to play receiver for us this week and have a game plan for what they can do.”

416 — The Bucs have scored 416 points, breaking the franchise single-season record of 396 set a year ago.

Host AFC South leader Houston on Saturday. It’s an opportunity for a signature victory in the first season under Arians, considering the Rams are the only team with a winning record that Tampa Bay has beaten.