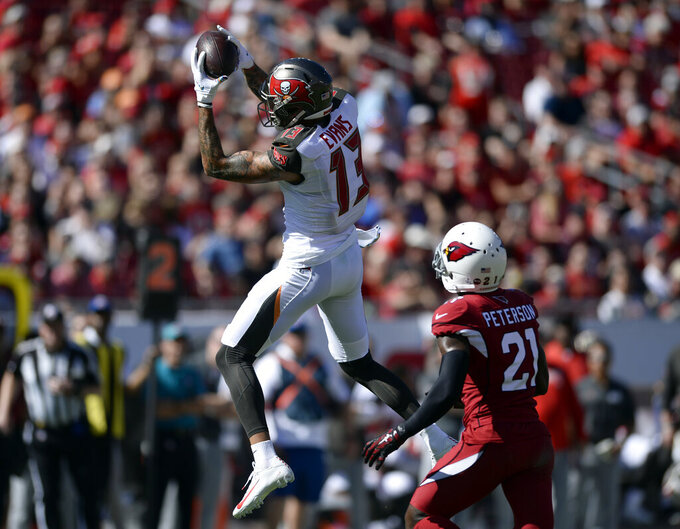 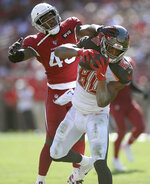 TAMPA, Fla. (AP) — Jameis Winston stood at the podium, a winner for the first time in six weeks.

The fifth-year pro threw two more interceptions, but the Tampa Bay Buccaneers were able to overcome them and beat the Arizona Cardinals 30-27 to end a four-game skid that was the worst part of a seven-week stretch between true "home" games.

Peyton Barber scored on a 1-yard run with 1:43 remaining, and Winston threw for 358 yards and one touchdown for the Bucs (3-6), who drove 92 yards for the winning TD after cornerback Jamel Dean redeemed himself from a poor performance the previous week by ending Kyler Murray's NFL rookie record streak of 211 consecutive pass attempts with a pick that denied the Cardinals an opportunity to add to a 27-23 lead.

"We made plays to win the game," Bucs coach Bruce Arians said. "Defensively, we're still a work in progress, but I like the fact that we're in here celebrating. Can't be happier for anybody more than Jamel Dean. He wins the game. Last week, he's the goat. He's going to be a hell of a player."

Murray threw for 324 yards and three TDs to Christian Kirk, whose 15-yard scoring reception put the Cardinals up by four midway through the fourth quarter. Kirk also scored on receptions of 33 and 69 yards and finished with six catches for 138 yards.

Dean, who allowed several big plays during a 40-34 overtime loss to Seattle the previous week, picked off a throw intended for Trent Sherfield, who fell down just as the rookie closed in on the ball at the Bucs 8. It was one of three major mistakes that cost the Cardinals points in the second half.

"That's what separates the really good teams from the average teams. We had a bunch of those mistakes," Arizona coach Kliff Kingsbury said. "Things keep showing up. We've got to do better as a team because the effort is outstanding, but we're hurting ourselves."

Arizona also hurt its chances by losing a fumble for the first time all season, giving the ball back to Tampa Bay after Winston tossed his second interception deep in Bucs territory. A huge second-half drop by an uncovered Maxx Williams on fourth-and-1 from the Bucs 23 cost the Cardinals a sure touchdown early in the third quarter.

Kingsbury said the tight end lost the ball in the sun.

Murray, meanwhile, accepted responsibility for the late interception, his fifth of the season vs. 12 TD passes.

"I shouldn't have thrown it knowing we've got a field goal to make the game seven points," Murray said. "Honestly, when I threw it, there's no way I thought he was going to pick the ball off. That was unfortunate."

Winston's interceptions gave him 13 turnovers in the past four games. He made up for the mistakes with a 10-yard TD pass to O.J. Howard and by leading drives that produced three field goals and a 7-yard scoring run by Ronald Jones.

"We've got to point the credit to the defense. On the first interception they held them to three points and on the second interception we got the ball right back," Winston said.

The Bucs played in their home stadium for the first time since Sept. 22. In between, they played four road games wrapped around a "home" game against Carolina in London and their bye week.

TV cameras caught Bucs OLB Jason Pierre-Paul having to be restrained during a heated exchange DT Vita Vea. The 10th-year pro, playing in his third game since returning from a neck injury suffered in an offseason car accident, shrugged the incident as a "miscommunication.

"Me and Vita had a communication issue on the field. Basically we didn't communicate to each other well enough," Pierre-Paul said. "Anytime you've got two humble guys that are playing the game like that, you're going to get that emotion. But at the end of the day you see I came back to him: 'let's move on to the next play, that is over and done with."

Cardinals: RT Justin Murray (knee) was inactive. Justin Pugh shifted from LG to RT, with OL Mason Cole starting at LG. ... CB Patrick Peterson left the game in the fourth quarter with a calf injury and did not return.

Buccaneers: Played without injured starters CB Carlton Davis III (hip) and OLB Carl Nassib (groin), who were replaced by rookie CB Sean Murphy-Bunting and Pierre-Paul, who made his first start of the season.

Cardinals: at 49ers on Sunday.