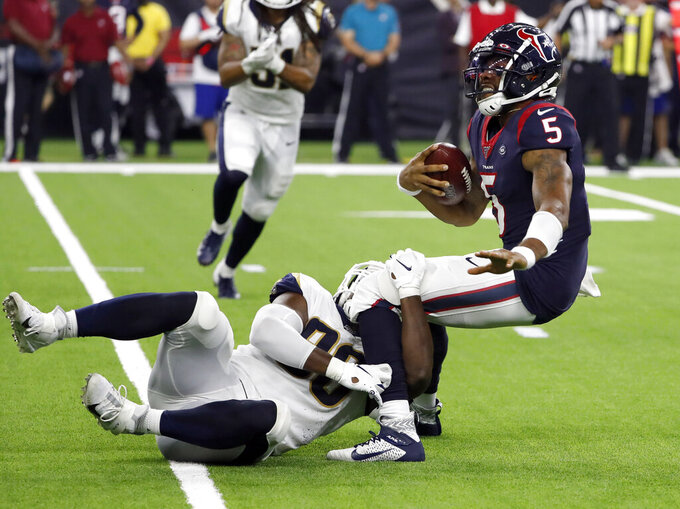 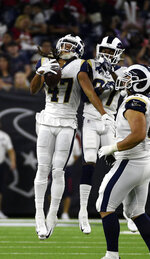 HOUSTON (AP) — Los Angeles Rams coach Sean McVay said he was talking this week with his father about how much he enjoys watching backup quarterback John Wolford play.

In the battle for Los Angeles' third-string quarterback job, Wolford dazzled and Brandon Allen struggled as the Rams closed out the preseason with a 22-10 win over the Houston Texans on Thursday night.

"He's got some moxie about himself and you can see that there's an energy in his play that gets you excited — he's fun to watch," McVay said. "He's twitchy, he has the ability to speed it up when he sees things and has the athleticism to be able to create off-schedule. He has a nice command of what we're trying to get done, and I've been really pleased with what John's done over the last couple of weeks."

Allen started the game but generally traded drives back and forth with Wolford. Jared Goff was on the sideline as was backup Blake Bortles, who was in uniform but didn't play.

"I've done everything I can and I'm going to sleep easy knowing that," Wolford said. "I'd love to stay here. But if I ended up somewhere else or on the practice squad, I'll be happy, too. Hopefully, I'm not out of the NFL, but I'm just happy to be here in the moment."

Los Angeles took a 15-10 lead late in the third quarter after an interception from Ramon Richards set up a scoring drive that ended with a 4-yard touchdown run by Justin Davis. Davis also added a two-point conversion. He finished with 78 yards rushing on 16 carries.

For Houston, Joe Webb III made his final case for a roster spot as a versatile option behind starting quarterback Deshaun Watson and backup A.J. McCarron, who missed recent weeks with his right hand in a cast after hitting it on a helmet during practice. McCarron shed the cast during pregame warmups and was throwing passes but did not play.

"He's been chomping at the bit to get back," Texans coach Bill O'Brien said of McCarron. "He must have told me the story two or three times about how at Alabama he played with a dislocated shoulder in his throwing arm. He wanted to get back. He's a football guy."

Webb looked sharp in the first half, completing 14 of 20 passes for 109 yards, while also scrambling for a 32-yard gain to the Rams' 5-yard line. On the next play, he found Jerell Adams for a 5-yard touchdown pass that put Houston up 7-0.

Like many players fighting for a roster spot, Adams said he hopes the play will bolster his chances.

"It takes away a little bit of anxiety, but I'm still worried," Adams said. "They still have a hard decision to make. I just have to wait patiently."

Fairbarn finished a strong preseason 6-for-6 on field goals with a long of 50 yards and went 6-for-7 on extra-point attempts.

Webb went 19 of 29 for 163 yards, a touchdown and an interception. Late in the fourth quarter, he rode on a cart toward the Texans locker room with an apparent right ankle injury. Webb was unavailable to talk to the media, and O'Brien said he didn't have details on the injury.

The Rams' lone score in the first half came on a 12-yard touchdown pass from Wolford to rookie tight end Kendall Blanton. Wolford's second touchdown pass came early in the fourth quarter on a 15-yard pass to Nsimba Webster.

Most Texans and Rams starters were sidelined for the final exhibition game, with Texans tight end Jordan Thomas being an exception. Thomas caught two passes for 19 yards.

McVay said the players who didn't play participated in a workout Thursday afternoon at the University of Houston, with the goal of getting a practice in with similar heat and humidity to what the Rams might experience at Carolina in their Week 1 opener. Thursday's high temperature of 98 degrees was mixed with humidity around 75% in Houston.

Texans outside linebacker Jadeveon Clowney remained absent from NRG Stadium. He has been the subject of trade rumors.

"It's unique," O'Brien said. "Really, it comes down to when he signs the tender. When he comes in and signs the tender and decides to do that. Really that's what it is. Until he does that, really, that's all I can say about it."

McVay said he's not worried about Goff being distracted by ongoing discussions around a possible contract extension getting done before the season starts.

"Jared has been a huge priority for us, and he's going to continue to remain a priority for us — I'll get updated in the near future," McVay said. "If all things come together, we'll get a chance to look at that, but we know that Jared is very important and we feel great about him as our quarterback."

Rams outside linebacker Ogbonnia Okoronkwo had two sacks, one on Webb and one on rookie Jordan Ta'amu.

Texans quarterback Deshaun Watson took dressing out for the game to a new level, wearing a red hoodie underneath his jersey and wearing all-white Air Jordan 13 sneakers.

Rams: Open the season at Carolina on Sept. 8.