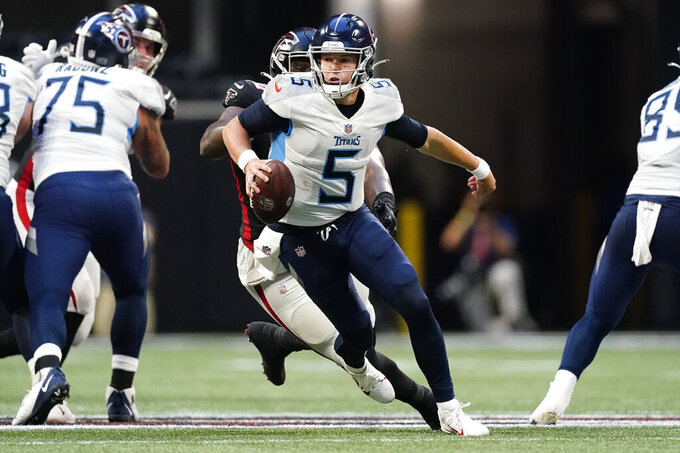 Tennessee Titans quarterback Logan Woodside (5) runs out of the p[ocket under the pressure of the Atlanta Falcons during the first half of a preseason NFL football game, Friday, Aug. 13, 2021, in Atlanta. (AP Photo/John Bazemore) 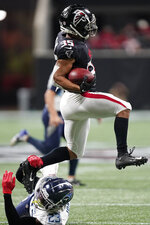 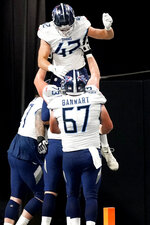 ATLANTA (AP) — Following his first look at his offense in a game situation, the best news for Atlanta first-year coach Arthur Smith was the dismal results didn't count.

Logan Woodside and Matt Barkley each threw touchdown passes to open Tennessee's backup quarterback competition and the Titans dominated the Falcons 23-3 on Friday night in the preseason opener for both teams.

The Titans held Atlanta to 139 yards and six first downs in the debut for Smith, Tennessee's former offensive coordinator. AJ McCarron and Feleipe Franks, the contenders to be the Falcons' backup to starting quarterback Matt Ryan, combined to complete only seven passes for 52 yards.

“Thankfully, those don't go on the record books,” Smith said, adding “We didn't do enough to help AJ.”

The Titans' quarterbacks had more success.

Woodside started and threw a 13-yard scoring pass to Cameron Batson in the second quarter and completed 10 of 15 passes for 84 yards.

“I wanted to give him a good ball, and he went up and made a good play,” Woodside said about Batson's scoring catch.

Barkley had third-down completions of 14 and 15 yards to Mason Kinsey on a field goal drive early in the second half. Barkley's 12-yard touchdown pass to tight end Miller Forristall in the fourth quarter completed the scoring.

“Quarterbacks, in my experience, throw to guys that they trust because they know they’re going to be open and they’re going to be where they’re supposed to be,” said Titans coach Mike Vrabel of Barkley's drive-extending completions to Kinsey. “We came up with some huge conversions in the second half.”

Barkley completed 5 of 8 passes for 54 yards. Neither quarterback threw an interception, though Woodside was sacked three times.

Each team held out its key playmakers. Atlanta rookie tight end Kyle Pitts, the No. 4 overall selection in the NFL draft, was in uniform but did not play. Smith said the decision to hold out Pitts “wasn't too difficult” and was a sign the rookie has been impressive in training camp.

“Kyle is right on schedule,” Smith said. “If we felt he was behind, we probably would have put him out there.”

It was a unique debut for Smith. His first game as coach came against Tennessee, where he worked for 10 years as an assistant, including the last two leading the offense.

Smith said this week the game against the Titans would provide "s a good evaluation for us because I know what we’re up against.” The results were not encouraging.

McCarron had a pass intercepted by Titans linebacker David Long early in the second period.

A 56-yard punt return by Tennessee's Chester Rogers to Atlanta's 14 set up the first of two first-half field goals by Tucker McCann.

The Titans held out starting quarterback Ryan Tannehill, running back Derrick Henry and wide receivers Julio Jones and A.J. Brown. None traveled with the team, eliminating Jones' chance to return to his NFL home of his first 10 seasons before his trade to Tennessee on June 6.

Ryan, wide receiver Calvin Ridley and running back Mike Davis were among key Atlanta players who did not play.

McCarron completed 5 of 12 passes for only 36 yards with an interception.

QB ON THE RUN

Franks was the Falcons' surprise rushing leader with five carries for 75 yards, including a 52-yard gain early in the fourth quarter. Franks had back-to-back runs of 11 and 10 yards to help set up Younghoe Koo's 42-yard field goal to open the second half. Koo was wide left from 55 yards following Franks' 52-yard run.

Franks struggled to move the ball through the air, completing 2 of 10 passes for 9 yards.

Smith had hugs and handshakes for some of his former players during pregame warmups. “Sure, you spend a lot of time with those guys,” Smith said. “You wish them well. ... It was great, but I'm focused on the Falcons and getting the team better and see if we can improve next week.”

Two Tennessee defensive players, safety Brady Breeze and linebacker B.J. Bello, left the game in the second quarter with ankle injuries. Breeze was helped to the sideline and then carted to the locker room.

Atlanta defensive linemen Ta'Quon Graham (hand) and John Cominsky left the game in the third quarter. Cominsky was escorted off the field to be checked for a possible concussion.

Tennessee will play another road game against an NFC South opponent when it visits Tampa Bay on Aug. 21.

Atlanta will have joint practices with the Dolphins at their facility next week before playing at Miami on Aug. 21.