Worn out? Loss puts Kitchens’ future with Browns in jeopardy 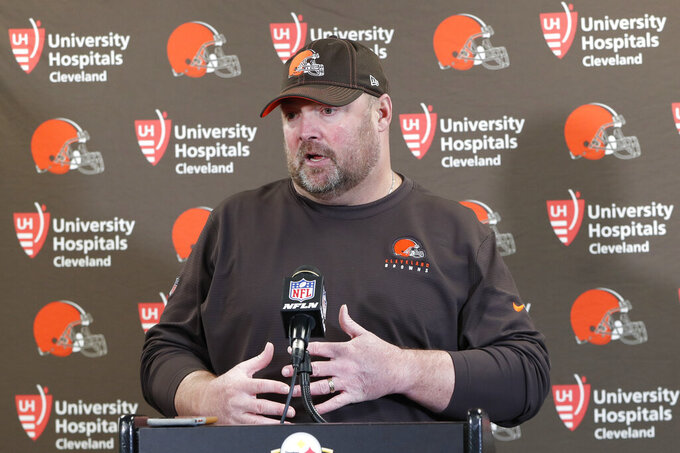 Maybe he should be. They’re both under heavy scrutiny.

On Sunday, the Browns’ playoff hopes took a devastating hit with a demoralizing 20-13 loss in Pittsburgh that all but guarantees the NFL’s longest postseason drought will extend from 2002 into the 2020 season.

For the second time under Kitchens, the Browns (5-7) did not play up to their talent level and failed to beat a team starting an unheralded and virtually unknown quarterback. Rookie Devlin “Duck” Hodges made more big plays than Baker Mayfield in leading the Steelers to a 16th straight win over Cleveland at Heinz Field.

The latest setback came after Kitchens inexplicably wore a “Pittsburgh started it” T-shirt in public, the slogan referring to the infamous Nov. 14 brawl between the teams that led to Browns star defensive end Myles Garrett being indefinitely suspended even while reviving this rust-belt rivalry.

But Kitchens’ attempt at sartorial humor — or maybe to impress his players — failed as badly as some of his suspect play calls this season.

Following Sunday’s game, Kitchens said he doesn’t regret wearing the shirt. However, he did express shame if his actions fired up the Steelers (7-5). That was never his intent.

“If that is what they take as motivation, of course, I am disappointed,” he said. “I know (Steelers coach) Mike (Tomlin) very well. They are motivated by more than just a T-shirt. We had a lot on the line there for that game, and I do not think that T-shirt put them over the top. Now, that is being strictly honest for you.”

And, just as honestly, Kitchens is once again under fire for a season again spinning in the wrong direction.

The Browns were expected to start December in the thick of the playoff race, not as an outsider hanging by a thread and calculating year-end, wild-card scenarios.

Kitchens may not survive to get a second season, but insists his focus is solely on improving his inexperienced team, which was clearly not ready for big moments like Sunday’s.

“No, I am not,” Kitchens said when asked point blank if he’s concerned about his job security.

Fortunately, he doesn’t have to worry about Mayfield, who is not expected to miss any time after injuring his right hand late in the first half.

Mayfield banged his hand on the face mask of Steelers linebacker Bud Dupree during his follow-through while throwing an incompletion just before halftime. Kitchens said he was prepared to play backup Garrett Gilbert in the second half before the X-rays take on Mayfield came back negative.

Mayfield played the entire second half wearing a glove, and Kitchens doesn’t think it impacted his ability to throw. He expects Mayfield to practice this week and play Sunday against the Bengals.

“I do wish I had given and handed the ball off at the 30-yard line after the interception,” Kitchens said.

Even after 12 games, Cleveland’s offense remains an unsolved mystery. The line didn’t give Mayfield enough time as he was sacked five times and rushed on several other throws. Mayfield’s last attempt to Jarvis Landry was way off the mark and intercepted with 1:17 remaining.

Kitchens indicated his players weren’t on the same page.

“We are going to continue to work on our communication,” he said.

Hunt averaged 6.6 yards on seven carries, often fighting for extra yards. He added five receptions, and wished he could have done more. Hunt, though, refused to question his usage.

The coach refused to divulge reasons for leaving Randall at home from the season’s biggest game, but signs point to him missing the team’s Thanksgiving practice.

3 — Total catches for star receiver Odell Beckham Jr., who left the locker room before speaking to reporters after the game. Despite efforts to get Beckham more touches, the Browns have struggled to consistently incorporate the playmaker.

With their margin for error completely gone, the Browns must win their last four — and get some help — to have any chance of making the playoffs. The final stretch begins Sunday against Cincinnati, which beat the New York Jets 22-6 for its first win to end the longest losing streak in franchise history.