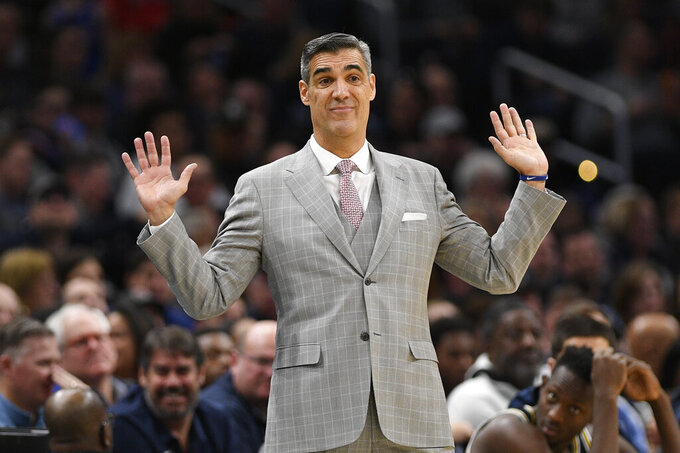 FILE - In this March 7, 2020, file photo, Villanova head coach Jay Wright gestures during the second half of an NCAA college basketball game against Georgetown in Washington. Two-time Villanova national champion coach Jay Wright says it's "50-50" the sport -- which took one of the first major hits in the coronavirus pandemic era with the cancellation of the 2020 NCAA Tournament - can make it through this season intact. (AP Photo/Nick Wass, File)

PHILADELPHIA (AP) — An avid sports fan, Villanova coach Jay Wright watched with interest how Major League Baseball muddled through its season to get to the World Series and college football and the NFL have been challenged to piecemeal schedules to complete a season.

That made the two-time national champion weary that college basketball teams can play a complete 25-game season without cancellations or severe disruptions.

Wright says it’s “50-50” the sport -- which took one of the first major hits in the coronvirus pandemic era with the cancellation of the 2020 NCAA Tournament - can make it through the season in tact.

“You have to try to anticipate what it’s going to be,” Wright said Wednesday. “But you have to realize, you could be wrong.”

The Wildcats already felt the impact of COVID-19 when they had to put workouts on hold for 14 days last month when members of the program tested positive for the virus. Citing confidentiality, Wright has not disclosed the names of the people who had it, but the winningest coach in Villanova history said he was not among them. Wright said he’s tested once a week — including Wednesday — and the worry of keeping his players and staff safe can leave him more restless than prepping for the Big East Tournament.

“It does affect you because you get different guys involved, obviously not everybody is involved,” Wright said. “Initially the whole team is shut down. We all have to be prepared for that during the season. I think we’re back on track. I feel like we handled that pretty well. We have not had any issues since.”

Wright said the Wildcats are “just a little bit behind” their normal late-October learning curve without the benefit of full practices because of COVID-19, nagging injuries, and the absence of secret scrimmages. Like all programs, Villanova also failed to run its usual summer program that cost them some in player development.

“We have our guys here during June and July and it’s a big part of our player development and we didn’t get it,” Wright said. “When we came back in August, we could only work out in pods, groups of four. Then we had our little COVID issue. So we probably had like 10 full practices the whole time so it forces you as a coaching staff to be creative about what you put in, how much you put in ... we’re really doing things a lot differently.”

Wright said the Wildcats are close to having a finalized schedule that could include a full Big East schedule, a marquee matchup against 2019 national champion Virginia at Madison Square Garden and a local slate of games against Big 5 teams. He said the Wildcats could potentially allow maybe 700 fans per game if allowed this season at the Pavilion.

He said the Big East is still considering some sort late December start and a form of a postseason bubble.

“The costs are exorbitant,” Wright said. “These are college kids. They’re not professionals. You really can’t demand they go into a bubble. If you do it for men, you’ve got to do for women’s and that doubles the cost.”