Yanda now a member of the old guard for soaring Ravens 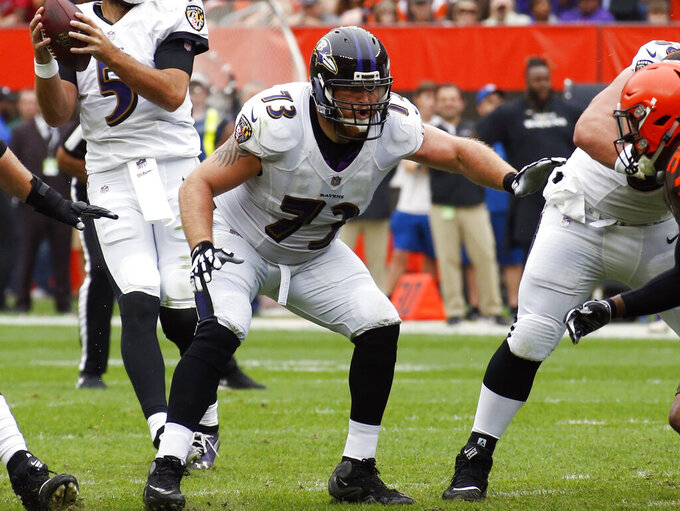 FILE - In this Oct. 7, 2018, file photo, Baltimore Ravens offensive guard Marshal Yanda (73) plays against the Cleveland Browns during the first half of an NFL football game, n Cleveland. Back when Marshal Yanda didn’t have a touch of grey in his red beard and had not yet earned the first of seven Pro Bowl bids, the big kid from Iowa was just a raw rookie with the Baltimore Ravens looking for some guidance. (AP Photo/Ron Schwane, File)

OWINGS MILLS, Md. (AP) — Back when Marshal Yanda didn’t have a touch of gray in his red beard and had not yet earned the first of seven Pro Bowl bids, the big kid from Iowa was just a raw rookie with the Baltimore Ravens looking for some guidance.

“There were great leaders on this team,” Yanda recalled Wednesday. “Jonathan Ogden and Mike Flynn were my first old dogs when I was a young buck. You want them to lead the way, and if you have questions you ask those guys.”

Thirteen years later, the 35-year-old right guard is the one who dispenses wisdom and knowledge within the locker room.

“I remember thinking back then, if I ever make it to be the old guy in the room I'll be a source for questions, for how I'm thinking about a play, taking care of your body, whatever,” Yanda said. “I wanted to be that guy, for sure.”

Yanda, for sure, is the anchor and spiritual leader of an offensive line that has played a major role in the NFL’s top-ranked rushing attack. The Ravens (8-2) have won six straight, are the highest-scoring team in the league and rank second in total yardage.

Sure, Lamar Jackson’s ability as a multi-threat quarterback has been huge. Yanda acknowledges this without hesitation. In fact, he’s delighted just being part of it.

“It starts with Lamar,” Yanda said. “He puts a lot of stress on every single defense just because of his run threat ability as a quarterback. That opens up other areas of the running game.”

Still, there’s no downplaying Yanda’s performance this season as part of a line in which the other four starters have a combined 11 years NFL experience.

Ever since he came out of Iowa as a third-round pick in 2007, Yanda has been among the best at his position. He’s maintained that level of excellence on the back side of a career that could earn him a bust in Canton, Ohio.

Doing a heck of a job in the locker room, too.

“One time, he was a rookie, young and playing and having someone helping him and tutoring him,” Ravens line coach Joe D’Alessandris said. “He’s doing the same thing now. His famous quote is, ‘Just do your job.’ He does his job. And that’s what he asks all the other guys to do.”

Yanda’s position as the team leader is evident on Sundays. Assuming the role formerly held by the retired Ray Lewis and departed Terrell Suggs, Yanda is the one who delivers the impassioned go-get-‘em speech before kickoff.

“You just want to be short and sweet, hit them with something that's on your mind,” he said.

Three years ago, Yanda missed three games and switched to left guard to protect a shoulder injury. Two years ago, he spent the final 14 games of the season on injured reserve with a leg injury. Last season, he played in all 16 games and added a start in the postseason, which helped him decide to return for another year.

“I definitely had that fire and desire to come back,” he said. “I made it through healthy last year, which was great, and it gave me some juice to come back and play this year.”

Obviously, with the Ravens soaring high and almost a lock to reach the postseason, Yanda knows he made the right choice.

“I'm enjoying it. I'm healthy and we're being successful and having a lot of fun out there,” he said. “That's why I play. I love this game. I love the camaraderie of the guys, the locker room. It's been a lot of fun.”