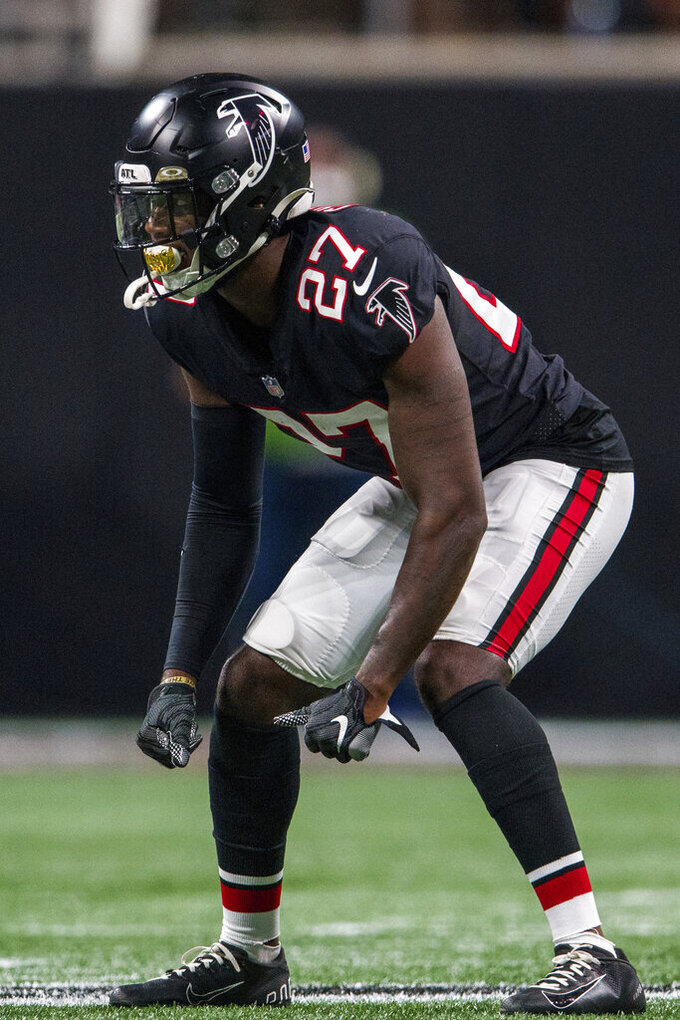 FILE - Atlanta Falcons safety Richie Grant (27) lines up during the first half of an NFL football game against the New England Patriots, Thursday, Nov. 18, 2021, in Atlanta. More roster moves could come, but as of Wednesday, Aug. 31, 2022, 14 players on the active roster are products of the two NFL drafts under the leadership of general manager Terry Fontenot and coach Arthur Smith, creating a more youthful look with such players as tight end Kyle Pitts, wide receiver Drake London, linebacker Arnold Ebiketie and safety Richie Grant positioned as leaders of the rebuild. (AP Photo/Danny Karnik, File)

FLOWERY BRANCH, Ga. (AP) — The Atlanta Falcons are being molded to fit the vision of general manager Terry Fontenot and coach Arthur Smith, creating a more youthful look with such players as Kyle Pitts and Drake London positioned as leaders of the rebuild.

Pitts, the tight end, and London, a wide receiver, are Atlanta's top picks of the past two NFL drafts with the new leadership team of Fontenot and Smith.

As of Wednesday, the active roster includes 14 players from those two drafts. Two more Falcons picks from the 2021 and 2022 drafts were signed to the practice squad.

Among the new defensive leaders on a team looking to end a streak of four consecutive losing seasons are linebacker Arnold Ebiketie and safety Richie Grant, second-round picks in 2022 and 2021, respectively.

The most dramatic change has come at quarterback, where Marcus Mariota was signed as the new starter after 14-year starter Matt Ryan was traded to Indianapolis. Rookie Desmond Ridder is the backup.

The Falcons claimed offensive tackle Chuma Edoga off waivers from the New York Jets on Wednesday. Edoga was a third-round pick by New York in 2019.

The Falcons didn't pick up the fifth-year option on right tackle Kaleb McGary, who has kept the starting job through training camp and the preseason. Smith immediately moved to defuse speculation Edoga was signed to take McGary's starting job.

Smith said “nobody we claimed is competing for the right tackle spot.” Smith said the plan with Edoga is “check to see if somebody is a fit.”

While McGary and left tackle Jake Matthews remain established starters, Smith has not announced a winner in the competition between Matt Hennessy and Drew Dalman at center.

“I want to take a step back, go back through everything, so we can take emotion out of it and make a good, objective decision,” Smith said Monday.

Among players signed to the practice squad were guard Justin Shaffer, a sixth-round selection this year, and wide receiver Frank Darby, a sixth-rounder in 2021.

London is expected to open the season as a starter if healthy. He has been held out after suffering a left knee injury in the preseason opener against Detroit on Aug. 12.

Smith has said the injury is not serious, but hasn't confirmed the rookie will be available on Sept. 11, when Atlanta opens its season at home against New Orleans.

Another notable practice squad addition was running back Caleb Huntley, who ran for 86 yards and a touchdown in a 28-12 win over Jacksonville to close the preseason.