Zach Wilson with another solid practice in Jets' scrimmage 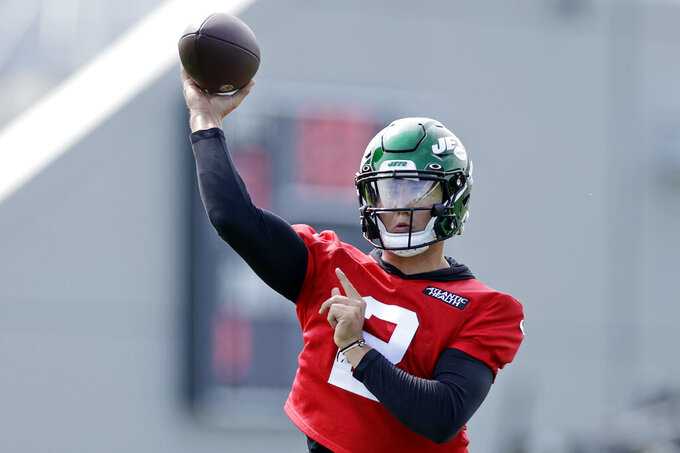 EAST RUTHERFORD, N.J. (AP) — Zach Wilson took the field at MetLife Stadium for the first time since last season and put together another solid practice.

That's promising news for the New York Jets and their second-year quarterback.

Wilson was unofficially 12 of 19 — including four drops by receivers — for 100 yards with a touchdown and an interception as the Jets prepare for their first preseason game next Friday night at Philadelphia.

All eyes are on the 23-year-old Wilson, and he's looking to build on a good finish to his rookie year during which he was not intercepted in his final five games. Wilson's decision-making and accuracy have appeared to improve this summer, especially during his last four practices — including this one in front of fans at the Meadowlands.

“He dropped a dime that buzzed a defender’s head that I thought was a chance to keep a drive going, had a really good strike there in the two-minute drive," Saleh said. “He moved around in the pocket, found some open lanes to run and bide some time. He was really good in the huddle. ... He was good with cadence because he was changing up his cadence. So, I thought he was really good."

Wilson, who also ran for 24 yards, capped a drive during which he was 5 for 5 with a 10-yard TD to Tyler Conklin. He led another that ended with a 37-yard field goal by Eddy Pineiro. He was also intercepted by Del'Shawn Phillips. In the final two-minute drill, Wilson was incomplete on fourth down deep to Corey Davis, who was blanketed by first-round cornerback Sauce Gardner.

Wilson's numbers would have been more impressive if not for drops by Davis, Elijah Moore, Braxton Berrios and Jeff Smith.

“I could make excuses,” Saleh said. “We’re professionals, we've got to make plays. But at the same time, just talking to the guys, the first time you’re in the stadium, the depth perception is much different. So you have to retrain your eyes for all of that, too. Not to make excuses for them, it’s a real thing and just adjusting to all of it. That’s why we had these scrimmages here.”

The Jets could use veteran depth on the line, and Brown could serve as a backup swing tackle. Brown, who turns 37 on Aug. 30, made his fifth Pro Bowl last season. He spent the last five years with Seattle after 10 years in Houston.

“Any time you have a chance to add a Pro Bowler like him and add to the depth of our roster, we’ll look into it,” Saleh said. “We’re always going to search far and wide, and there’s interest on both sides, obviously.”

Backup OT Conor McDermott was helped off the field after injuring his left ankle. Saleh had no immediate word on the severity of the injury — but if McDermott misses time, it could make the signing of Brown a bigger priority. ... CB D.J. Reed, RB Ty Johnson and DE Vinny Curry all sat out with hamstring injuries. Saleh said sitting Reed was “more precaution.”

NOTES: Greg Zuerlein, competing with Pineiro for the kicking job, booted a 56-yard field goal that had plenty of room to spare. ... S Will Parks had his second straight practice with an interception, this time picking off Mike White. ... WR Calvin Jackson Jr., an undrafted rookie out of Washington State, caught a 3-yard TD pass from Joe Flacco.