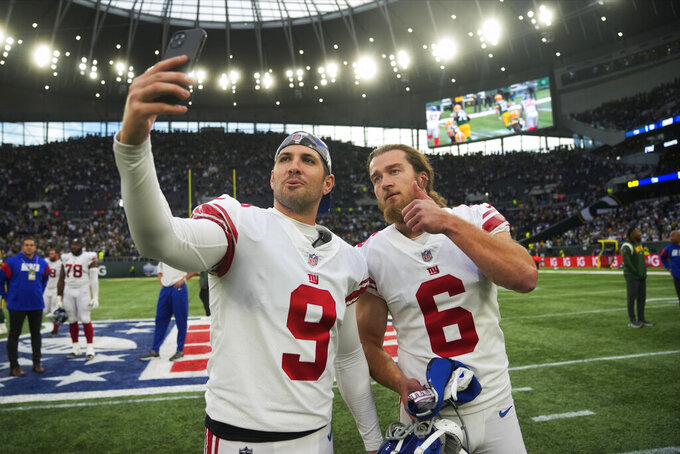 EAST RUTHERFORD, N.J. (AP) — The New York Giants are off to their best start since 2009 with a 4-1 record under coach Brian Daboll, and it's still hard to get a handle on them.

There is certainly a lot being said about the club that had five straight losing seasons, including a 4-13 record in 2021.

The two most prominent thoughts from some media and fans are the banged-up Giants are the worst 4-1 team in the NFL this season. The other is Daboll is the front-runner for NFL coach of the year.

Having lived in the New York City metropolitan area for roughly nine months, Daboll understands the hype building. The Giants have made the playoffs once (2016) since winning their fourth Super Bowl in February 2012 and the fans' expectations have grown.

Daboll said his approach with the team isn't going to change.

“What do we need to do to fix the things we want to fix and improve on?” Daboll said Monday. “Build off the things that we’ve been doing well and be as prepared as we can going into the next game.”

Daboll and his staff have done a good job preparing the players, especially the backups. The receiving corps has been without Kadarius Toney, Wan'Dale Robinson, Sterling Shepard (ACL) and Kenny Golladay (knee) at various times this season. Injuries among the defensive backs are growing.

The receivers have been led recently by backups Ricky James and Darius Slayton.

Defensively, Wink Martindale's group has been stingy, giving up no more than 23 points. In the Giants' 27-22 win over the Packers in London on Sunday, the defense had a second-half shutout. The only points Green Bay got came on a deliberate late safety.

As for some considering the Giants being the worst 4-1 team and the coach of the year talk, Daboll isn't paying attention.

“Whether we’re 4-1, 1-4, whatever our record is, that’s what our record is,” he said. “It’s always about improvement and trying to do the best job you can each week to play your best and coach your best.”

The reality is the Giants, who have won four games by a total of 17 points, have 12 regular-season games left and anything can happen.

The constant for the Giants has been the play quarterback Daniel Jones and running back Saquon Barkley.

Playing on a sprained left ankle, Jones was 21 of 27 for 217 yards and no interceptions. He also ran 10 times for 37 yards. For the season, he has 230 yards rushing and a TD and has thrown for 848 yards, three TDs and two interceptions.

Barkley's 533 yards rushing is second in the NFL to Cleveland's Nick Chubb (593). He has three rushing TDs and 143 yards receiving. His 676 all-purpose yards leads the league.

The secondary. CB Adoree Jackson left Sunday's game with knee and neck injuries. Aaron Robinson, the other starter, went on IR last week with a knee injury. That left Fabian Moreau, Nick McCloud and Justin Layne to play cornerback. The veterans were signed after the final cut. Rookie Cor'Dale Flott has missed the last two games with a calf injury, but he is making progress. Second-year cornerback Rodarius Williams may come off IR and former Bill Olaijah Griffin is on the practice squad.

Slayton. The four-year veteran was forced to take a pay cut before the season and wasn't active for the opener. Injuries to the other wide receivers got him back on the field and he had his best game, catching six passes for 79 yards.

No hands-down winner. Center Jon Feliciano missed a block that led to a sack. Nickel back Darnay Holmes got beat on consecutive plays by Randall Cobb. The first went for 20 yards and he was lucky not to get a pass interference call on the next one near the end zone. Safety Jason Pinnock also was lucky when a short Green Bay punt hit him at his own 37 and went out of bounds with the score tied in the fourth quarter.

8-8 — The last time the Giants started this well was in 2009, when they won their first five games. Guess what they finished?

The Giants return home and play at MetLife Stadium for the fourth time in five weeks. Facing Baltimore will be interesting because it matches Martindale against coach John Harbaugh and Ravens quarterback Lamar Jackson. Martindale spent a decade in Baltimore, the last four years as the team's defensive coordinator before being fired.