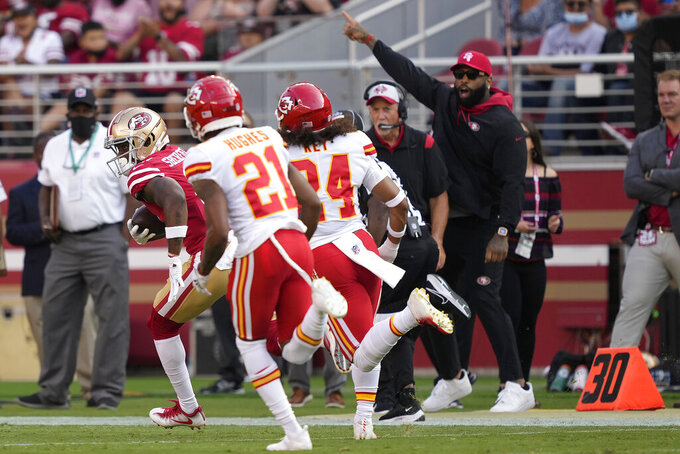 SANTA CLARA, Calif. (AP) — Whoever ends up playing quarterback for San Francisco this season figures to have a much deeper set of receivers at his disposal than what the 49ers had last season.

With starters Deebo Smauel and Brandon Aiyuk dealing with injuries last season that limited them to just a handful of games when both were healthy and not much proven depth behind them, the Niners struggled to get a consistent downfield passing game going in 2020.

But now with the top two targets healthy to start the season, the return of Mohamed Sanu, a strong camp from special teams ace Trent Sherfield and the emergence of Jauan Jennings after sitting out his rookie season injured, Jimmy Garoppolo and Trey Lance should have plenty of options.

“We don’t have 1, 2, 3 or 4 settled,” coach Kyle Shanahan said Monday. “You guys know who’s probably going to make it, at least with those groups, but those guys have got to go out there and play. I mean, we had a lot of young guys play last year by default with the injuries that happen and some of the situations we were in. I want those guys going out there competing and showing they can play good football.”

While Samuel and Aiyuk both figure to start, it's the performance of some of the other players that has been most encouraging so far this summer.

Sherfield caught just nine passes the previous two seasons in Arizona when he played mostly on special teams but has proven he can contribute as a receiver as well.

“We were hoping he could, we just didn’t study him a ton on it,” Shanahan said. “There wasn’t a ton of tape on it. We liked how he was wired and how he could run and stuff and how physical he played on special teams. But getting him here right in OTAs, we saw the receiver ability.”

That has been evident on the practice field and in the exhibition opener when he caught an 80-yard TD from Lance on Saturday against Kansas City.

Sherfield and Lance have built a strong connection getting plenty of time together as part of the second-team offense.

“Just building that relationship with him has been really, really good," Sherfield said. "Not just with Trey, but also with Jimmy, too. All the quarterbacks. ... All those guys and being able to work with all of them has been a really, really fun opportunity and whenever the ball come my way, no matter who it’s from, got to catch it and make a play.”

Jennings has also been a bit if a surprise this season after being drafted in the seventh round in 2020. He started the season on the practice squad but hurt his hamstring and never got a chance to play.

But now he is showing off the skills that helped him catch 59 passes his final year at Tennessee when he was also dynamic after the catch with the ability to break tackles.

He caught two laterals from Lance on Saturday that he turned into gains of 11 and 12 yards for first downs, added a 26-yard catch and was a strong run blocker.

“He’s a physical guy who loves to play football and I wanted to see it transfer over to the game and make sure he could still stay under enough control and do his assignments also,” Shanahan said. “When he got his opportunities when the ball was thrown to him, he came through.”

Sanu, a nine-year vet who played three games in San Francisco last season, is back for another stint and is showing he can be a part of the offense as well. He caught a TD pass in practice from Garoppolo on Monday to end a drive.

NOTES: DE Nick Bosa could take part in team drills next week as he works his way back from a season-ending knee injury in 2020. ... DT Javon Kinlaw hurt his shoulder last week and is week to week. ... The Niners signed LB Mychal Kendricks to a one-year deal. Kendricks has played nine seasons in the NFL, including 2020 with Washington. ... The team cut CB Ken Webster, LB James Burgess Jr., LB Donald Payne and DL Eddie Vanderdoes. ... Rookie WR Austin Watkins (broken foot) will be placed on IR.