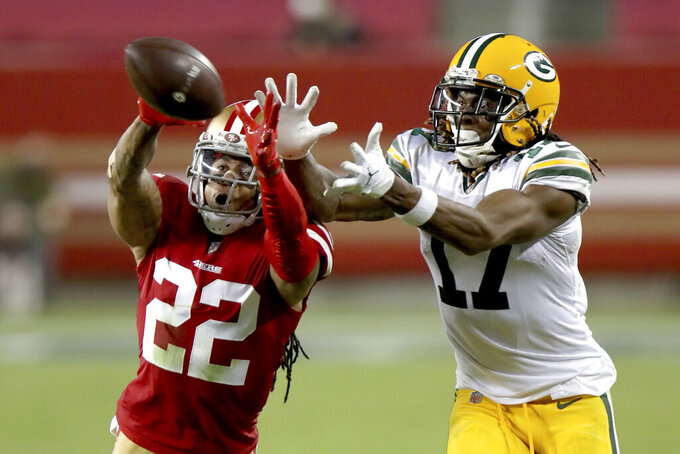 FILE - San Francisco 49ers cornerback Jason Verrett (22) intercepts a pass in front of Green Bay Packers wide receiver Davante Adams (17) during an NFL football game in Santa Clara, Calif., in this Thursday, Nov. 5, 2020, file photo. The 49ers are bringing back cornerback Jason Verrett on a one-year deal. General manager John Lynch announced the deal on Monday, March 15, 2021, shortly after Verrett was allowed to begin talking to other teams about a potential deal. NFL Network reported the contract has a $5.5 million base value with the chance to make more. (AP Photo/Scot Tucker, File)

SANTA CLARA, Calif. (AP) — The San Francisco 49ers are bringing back cornerback Jason Verrett on a one-year deal and have agreed on a two-year contract with free agent edge rusher Samson Ebukam.

General manager John Lynch announced the agreement Monday on Twitter shortly after Verrett was allowed to begin talking to other teams about a potential deal. NFL Network reported the contract has a $5.5 million base value with the chance to make more.

Verrett has been plagued by injuries throughout his career but stayed healthy in 2020 and excelled at cornerback for the 49ers. That made him a high priority to keep this offseason.

A person familiar with the deal told The Associated Press that San Francisco has also added Ebukam from the Rams on a two-year, $12 million deal that can be worth up to $13.5 million. The person spoke to the AP on condition of anonymity because the deal can't be signed until the start of the league year on Wednesday.

Ebukam played the past four seasons in Los Angeles with 14 sacks in 64 games. He had 4 1/2 sacks last season, when he also had 20 quarterback pressures on 168 pass rushes, according to Pro Football Focus.

Ebukam gives San Francisco another option across from Nick Bosa, with Dee Ford's status uncertain because of back injuries and Kerry Hyder set to become a free agent.

Verrett started 13 games with two interceptions and seven passes defensed. He was one of the top graded cornerbacks in coverage, allowing 363 yards receiving on 56 targets in 440 coverage snaps, according to game-tracking data from Sports Info Solutions.

Verrett’s injury history is a long one since he entered the league as a first-round pick by the Chargers in 2014. He missed eight games with a torn labrum as a rookie, tore his ACL four games into the 2016 season, went down with a season-ending knee injury in the 2017 opener and tore his Achilles tendon on the first day of training camp in 2018.

He left the Chargers after that season and signed with the 49ers in 2019, when he played just four snaps before going on season-ending injured reserve with an ankle injury.

But when he’s been healthy, he has been one of the top cornerbacks in the league.

Verrett is the second cornerback the Niners have signed this offseason, after agreeing to a two-year contract worth up to $10.1 million with Emmanuel Moseley last week before he became a restricted free agent.

Richard Sherman and slot cornerback K’Waun Williams are both slated to become unrestricted free agents on Wednesday and can negotiate with other teams starting Monday.

The Niners also announced that fullback Kyle Juszczyk signed a five-year deal worth $27 million that had been agreed to on Sunday.

“Kyle is a unique football player whose versatility, leadership and skill set are a tremendous fit with us,” Lynch said in a statement. “He has been integral to the success of our offense the last four seasons and his contributions on the field are just a portion of the value he brings to our team. Kyle has helped to establish a standard for our team on the field, in the locker room and in the community. We couldn’t be prouder to reward him with this well-deserved contract extension.”