49ers look for bounce back when they host Seahawks 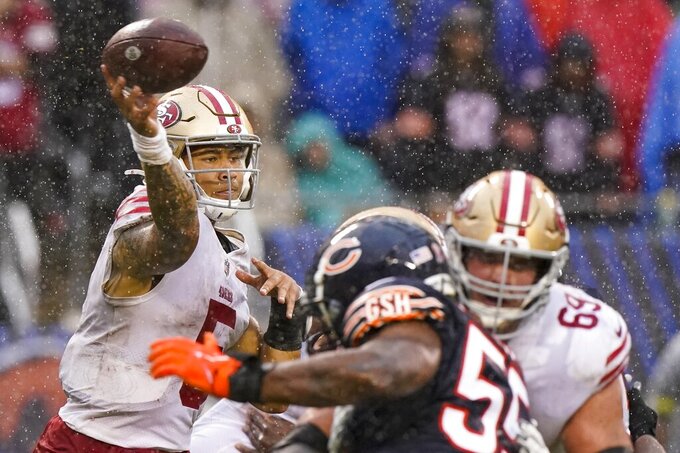 OPENING LINE: 49ers by 9 1/2, according to FanDuel SportsBook.

TURNOVER DIFFERENTIAL: Seahawks plus-1; 49ers minus-1.

SEAHAWKS PLAYER TO WATCH: QB Geno Smith was almost perfect in the first half last week, going 17 for 18 for 164 yards and two touchdowns. He went just 6 for 10 for 31 yards in the second half, but it was enough for the win.

49ERS PLAYER TO WATCH: QB Trey Lance had a rough opener in sloppy conditions in Chicago. He completed 13 of 28 passes for 164 yards and an interception. He added 54 yards rushing on 13 carries. San Francisco is counting on a better performance this week from Lance, who is in his first full season as starter after replacing Jimmy Garoppolo.

KEY MATCHUP: Seahawks Ts Charles Cross and Abe Lucas vs. 49ers DE Nick Bosa. Seattle's rookie tackles should have their hands full with Bosa, who is one of the top pass rushers in the NFL. Bosa will line up on both sides during the game so he should get the chance to work against both rookies.

KEY INJURIES: Rookie RB Ken Walker III (hernia) is expected to make his season debut after having surgery last month. ... LG Damien Lewis (ankle) may be ready to return after suffering an ankle sprain in Seattle’s second preseason game. Phil Hayes started in Lewis’ place in the opener. ... The Niners placed starting RB Elijah Mitchell on IR with a knee injury. ... San Francisco is hoping to get TE George Kittle back after he missed the opener with a groin injury.

SERIES NOTES: Seattle has won four straight and 15 of the past 17 matchups. ... This will be the first time these teams have played without Russell Wilson starting at QB for the Seahawks since the 2011 season. Wilson's 17 wins against San Francisco, including in the playoffs, are tied with Johnny Unitas for the most ever against the Niners.

STATS AND STUFF: Smith had his fifth career game completing 80% or better of his passes in the opener vs. Denver. Smith’s passer rating of 119.5 was the highest of any NFC quarterback in Week 1. ... Both touchdown catches in Week 1 were by Seattle tight ends, including the first career touchdown for Colby Parkinson. ... Seahawks are 7-1 at Levi’s Stadium since it opened in 2014. ... RB Rashaad Penny averaged 5 yards per carry in Week 1, but was limited to 7 yards on four carries in the second half against Denver. ... LB Jordyn Brooks led Seattle with 12 tackles. He has 11 games with 10 or more tackles since the start of last season, third most of any defensive player in the NFL. ... San Francisco is looking to avoid its first 0-2 start since 2017. ... The Niners are 5-8 at Levi's Stadium the past two seasons. ... The 49ers are 8-29 under coach Kyle Shanahan in games started by a QB other than Garoppolo. ... 49ers QB Trey Lance has at least 13 carries in two of his three career starts. Only eight QBs since the merger have more career games with at least 13 carries. ... San Francisco's Deebo Samuel led the NFL last season with seven TD runs from outside the 5-yard line and had another in the season opener. ... The Niners allowed 91 yards and two TDs on three plays last week against Chicago and 113 yards on the other 53 plays. ... Bosa has 20 1/2 sacks since the start of last season, including the playoffs. Only Pittsburgh's T.J. Watt has more in that span with 24 1/2. ... Niners S Talanoa Hufanga had career-high 11 tackles last week and his first career INT.

FANTASY TIP: Jeff Wilson Jr. should get the start at RB for the Niners with Elijah Mitchell sidelined. Wilson has averaged 81.2 yards rushing in his nine career starts with eight total touchdowns.