49ers QB Trey Lance out for season with broken ankle 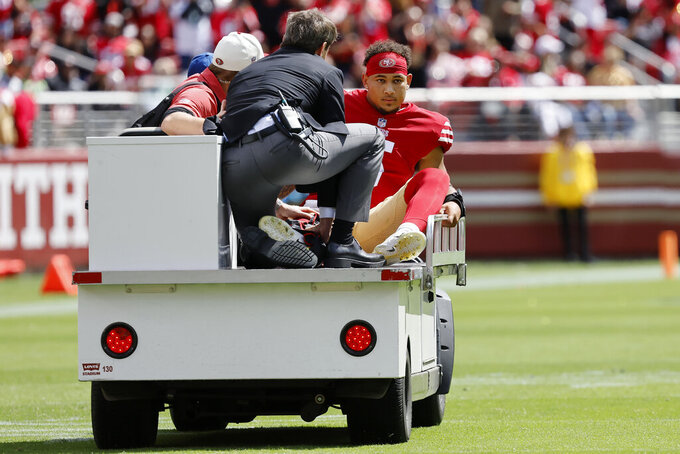 San Francisco 49ers quarterback Trey Lance, right, is carted off the field during the first half of an NFL football game against the Seattle Seahawks in Santa Clara, Calif., Sunday, Sept. 18, 2022. (AP Photo/Josie Lepe) 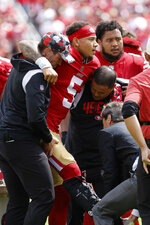 Lance went down after running the ball on the second drive of a 27-7 win over the Seattle Seahawks. A cart came out on the field and Lance's leg was put into an air cast before he was taken off.

Coach Kyle Shanahan said after the game that Lance would need to undergo season-ending surgery, raising immediate questions about using Lance as a runner between the tackles so often early this season.

“Any time a guy gets hurt, I wish I didn’t call that,” Shanahan said. "But no, that’s something we were going to do and something we would continue to do. It’s a football play we believe in and something that gives him a real chance to be successful.”

Lance's teammates and several Seahawks players paid him respect before he left the field and was replaced by former starter Jimmy Garoppolo, who threw a touchdown pass on his first full drive and passed for 154 yards.

“It's tough whenever you see a guy get hurt,” Garoppolo said. “I feel for him. Trey’s a tough dude. He’ll be all right.”

Lance took over the starting job this season from Garoppolo after being drafted third overall in 2021. San Francisco traded three first-round picks to move up nine spots to take Lance, making a major investment in him.

Lance spent his rookie season mostly on the bench watching Garoppolo as the Niners went all the way to the NFC title game before losing to the Rams.

But now he was supposed to get his chance as a starter for the first time since 2019 at North Dakota State. Lance only played one game in college the following season because of the pandemic.

“It’s the worst part of the game, obviously," said defensive end Nick Bosa, who had a season-ending knee injury in Week 2 of the 2020 season. “It happens instantly and there’s no going back. Once it happens, obviously you feel like your life is over for a certain amount of time. ... If he gets surgery, whenever that is, then that kind of starts your road back. It’s not going to be easy, but he will be back and he’ll be fine. Just really tough right now.”

San Francisco planned to trade Garoppolo this offseason, but was unable to after he underwent shoulder surgery in March.

Garoppolo remained on the roster but didn't practice with the team at all during training camp, throwing on his own on a side field, before agreeing to return as a backup on a reduced contract.

Instead of the nonguaranteed $24.2 million base salary Garoppolo was owed this season, he will get a $6.5 million fully guaranteed base salary, $500,000 in roster bonuses and the chance to make nearly $9 million more in playing time bonuses.

Garoppolo made $350,000 in bonuses Sunday for playing at least 25% of the snaps and the Niners winning the game.

Now he could have a chance at a more substantial role depending on how long Lance is injured. Garoppolo didn't take long to get into form, throwing a 38-yard TD pass to Ross Dwelley on his first full possession.

Lance was 2 for 3 for 30 yards passing and had three carries for 13 yards before leaving the game. This is the second time Lance has gotten hurt in his brief time in the NFL. He injured his knee after his first start last season against Arizona when Garoppolo was hurt.

Lance carried the ball 47 times in less than 15 quarters as the main quarterback the past two seasons.

“Do you guys watch other teams in this league? Buffalo does it all the time with their quarterback,” Shanahan said about Josh Allen. "It’s a pretty normal play. It’s part of football and it’s unfortunate that he hurt his ankle on it. It’s a very normal play.”