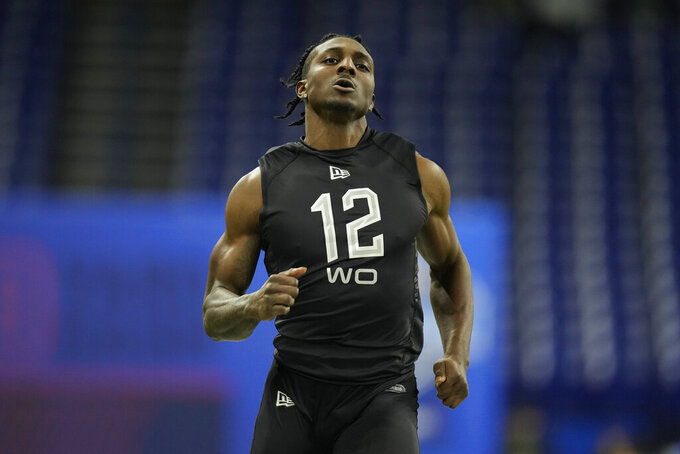 FILE - SMU wide receiver Danny Gray runs the 40-yard dash at the NFL football scouting combine March 3, 2022, in Indianapolis. San Francisco 49ers rookie receiver Gray found the ideal workout partner before the draft to prepare him to play with the 49ers' strong-armed quarterback Trey Lance. It just happened to be a former 49ers quarterback known for his his ability to throw with velocity. “I worked out with Colin Kaepernick and he has kind of like a bazooka, too," Gray said Thursday, May 12. "That workout was pretty great. So I think I’m. I think I’m up for the task.” (AP Photo/Charlie Neibergall, File)

It just happened to be a former 49ers quarterback known for his his ability to throw with velocity.

“I worked out with Colin Kaepernick and he has kind of like a bazooka, too," Gray said Thursday. “That workout was pretty great. So I think I’m up for the task.”

Gray was part of a group of receivers that included Eagles wideout Jalen Reagor and Washington draft pick Jahan Dotson who worked out with Kaepernick in Dallas.

Kaepernick hasn't played in the NFL since his final year with the 49ers in 2016 when he made headlines when he began kneeling during the national anthem to protest police brutality and racial inequality.

The opportunity to work out with an iconic figure like Kaepernick was meaningful for Gray.

“It was a great impression working out with a Super Bowl quarterback, a great quarterback at that," he said. "It was a surreal moment for me, really.”

The Niners drafted Gray in the third round of the draft two weeks ago, hoping the speedy receiver out of SMU adds another deep-threat option for Lance in coach Kyle Shanahan's offense.

Gray arrived at the Niners facility on Thursday to prepare for his first rookie minicamp. He got the opportunity to meet Lance in person and began getting acclimated before taking part in his first NFL practice on Friday.

The journey to the NFL was a long process for Gray, who started off at junior college at Blinn College after failing to qualify academically for a four-year school.

“It was a tough moment in my life,” he said. “I kind of felt like a failure at the time, knowing that I was a non-qualifier coming out of high school. It kind of hurt me a little bit, like I let my mom down, my family and friends. But it made me a stronger person. It made me a stronger player. It made me want to really just never be satisfied.”

Gray played well at Blinn and earned a spot at SMU to finish his college career. He caught 82 passes for 1,251 yards and 13 TDs in two seasons.

Gray, an accomplished sprinter in high school, ran a 4.33 40-yard dash at the combine and provides a needed ingredient to San Francisco's offense.

“I’m elite in open space,” he said. “I can turn the speed on at any time. On the field, my speed is natural. It’s just there and you see it.”

Gray is more than just a sprinter as evidenced by the 8.5 yards after catch he averaged last season at SMU, according to SportsInfo Solutions.

That's part of the toughness that was instilled in him by his uncle from when he started playing football at age 5.

“He always drilled in my head — head down, hard work,” Gray said. “It doesn’t matter what. Go be the toughest guy on the field, no matter what.”

Gray is part of a Niners rookie class headlined by second-round edge rusher Drake Jackson. San Francisco didn't have a first-round pick, having traded it away for Lance last year.

The Niners also took LSU running back Tyrion Davis-Price 12 spots before Gray at No. 93 before adding some depth at cornerback and the offensive line on day three of the draft.

San Francisco finished it off by taking quarterback Brock Purdy with the final pick as Mr. Irrelevant.

“After the draft, I had family and friends coming over and just having fun with it or texting me, saying like, 'You’re relevant to us,' and all that kind of thing,” Purdy said. “They've been having fun with it. But for me, I get an opportunity. That’s how I’m looking at it.”