Aaron Donald on helmet swing:
'It was just a practice' 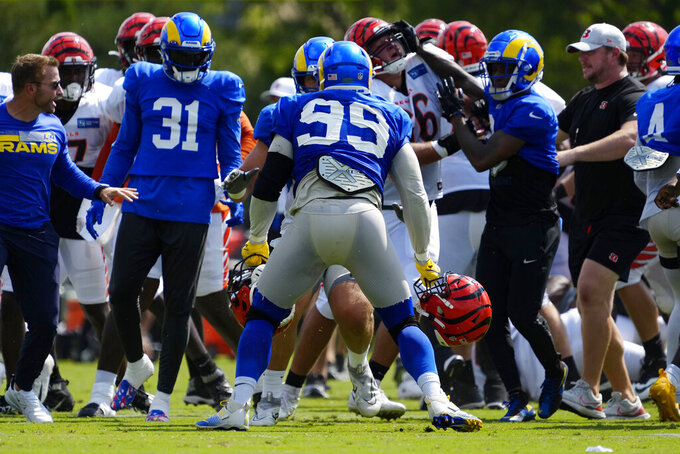 Los Angeles Rams defensive tackle Aaron Donald (99) regains his footing with two Cincinnati Bengals helmets in his hands after a third scuffle escalated into a brawl during a joint preseason NFL football camp practice between the Bengals and the Rams in Cincinnati, Thursday, Aug. 25, 2022. Practice was ended early after the third scuffle turned into a broader fight between players on both teams. (Sam Greene/The Cincinnati Enquirer via AP)

“It was just a practice. It was football,” Donald said Wednesday in an interview for an upcoming episode of the AP Pro Football Podcast. “I don’t really wanna go back to nothing negative that happened and talk about something that happened in a practice. My main focus is Buffalo.”

The three-time AP Defensive Player of the Year and seven-time All-Pro was thrown to the ground after swinging a helmet while players threw fists in a free-for-all that ended the session between the visiting Los Angeles Rams and the Bengals.

Asked if he addressed the incident with his teammates and Rams coach Sean McVay and if everything was OK, Donald only said “yes.”

In 2019, the Browns’ Myles Garrett was suspended six games for using his helmet to hit Steelers quarterback Mason Rudolph over the head during a regular-season game.

Donald isn’t subject to punishment from the NFL because the incident occurred during practice and teams are responsible for disciplining their players.

The defending Super Bowl champions begin the season next Thursday night at home against the Buffalo Bills. Donald is planning to play. The 31-year-old superstar defensive lineman is hoping to help the Rams become the first repeat champions since the 2003-04 New England Patriots.

The Rams restructured Donald’s contract in the offseason, giving him $65 million in guarantees over the next two seasons and $95 million through 2024.

Donald, who had 12 1/2 sacks last season, isn't slowing down. He's taking steps to improve his recovery process and ensure his body can withstand the rigors of the NFL.

“Being an older player, 31 years old, being able to have the work ethic I got, the one thing that I needed to do a lot better is recover and take care of my body,” Donald said. “That’s my main focus. I’ve got the work ethic and now making sure I have the recovery part so I can play at a high level.”