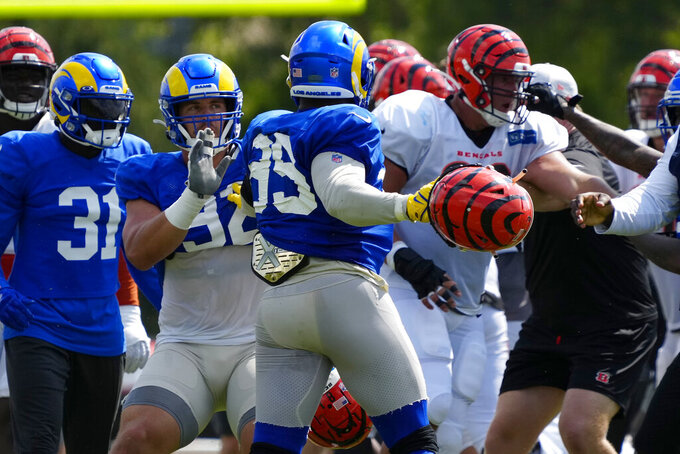 Los Angeles Rams defensive tackle Jonah Williams (92) attempts to hold back Rams defensive tackle Aaron Donald (99) as a third scuffle escalates into a brawl during a joint preseason NFL football camp practice between the Cincinnati Bengals and the Rams in Cincinnati, Thursday, Aug. 25, 2022. Practice was ended early after the third scuffle turned into a broader fight between players on both teams. (Sam Greene/The Cincinnati Enquirer via AP) )

Players threw fists and helmets during scuffles leading up to the final free-for-all. Donald, a three-time AP Defensive Player of the Year and eight-time Pro Bowler, was thrown to the ground after swinging a helmet.

Bengals coach Zac Taylor downplayed the event, saying: “Emotions run high. We've been working together for two days now, and that's just some real competitive guys getting into it.”

Any punishment for the brawl would have to be issued by the Rams and Bengals because the NFL doesn’t impose discipline for conduct at practice, a league official told The Associated Press.

Things got chippy in the middle of the second day of the joint practice, when Cincinnati offensive lineman La'el Collins blocked Donald as quarterback Joe Burrow completed a long pass to Ja'Marr Chase. On the next play, Collins scuffled with linebacker Leonard Floyd, ripping off the defender's helmet and tossing it.

Collins was involved in another scuffle before the final sideline-clearing fight.

The Bengals and Rams, who played in the Super Bowl in February, face each other in the final preseason game on Saturday night in Cincinnati.

In 2019, the Browns' Myles Garrett was suspended six games for using his helmet to smash Steelers quarterback Mason Rudolph over the head during a regular-season game.