Aaron Rodgers says he will remain with Packers next season 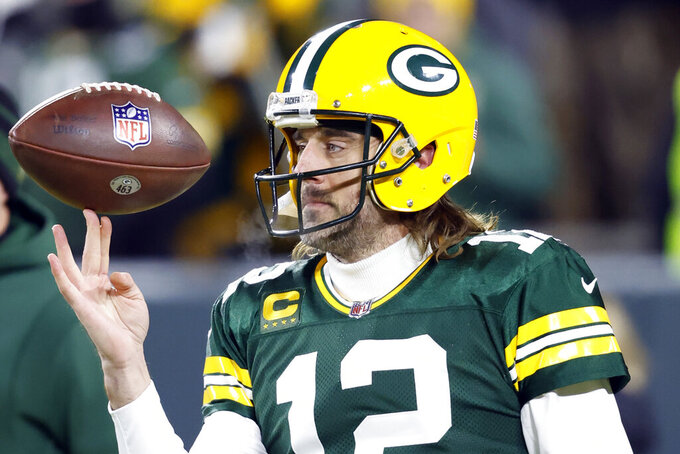 GREEN BAY, Wis. (AP) — Aaron Rodgers is planning to come back to the Green Bay Packers for an 18th season, a move that keeps the reigning MVP off the trade market and answers the question that had dominated NFL offseason discussions.

Rodgers sent out a tweet Tuesday afternoon confirming his return.

“YES, I will be playing with the Packers next year,” Rodgers said. “However, reports about me signing a contract are inaccurate, as are the supposed terms of the contract ‘I signed.’ I'm very excited to be back.”

NFL Network and Pat McAfee, the host of “The Pat McAfee Show” on SiriusXM and YouTube, had both reported earlier in the day that Rodgers was staying with the Packers. Rodgers makes a weekly appearance on McAfee’s show during the season.

NFL Network reported that the 38-year-old Rodgers had agreed to a four-year, $200 million contract that includes $153 million in guaranteed money. McAfee disputed the terms and said the contract wasn't signed yet, and Rodgers' tweet backed up McAfee's account.

Rodgers’ decision comes nearly a month after he won his second straight MVP award. The four-time MVP quarterback has spent his entire career in Green Bay.

He said he wanted to make an announcement on his future before the start of the free agency period that begins next week. The reports of his decision surfaced the same day the Packers placed the franchise tag on All-Pro receiver Davante Adams. Unless Adams signs a long-term deal before July 15, he will make just over $20 million in 2022.

Rodgers wanted to avoid a repeat of 2021, when his status was uncertain until the start of training camp after he skipped the Packers’ mandatory minicamp.

The questions about his future stemmed from Rodgers’ disagreements with team management at the time. Rodgers said on multiple occasions over the last few months that his relationship with team officials had improved significantly.

Rodgers’ plans had been the subject of much speculation ever since the Packers traded up four spots to take Utah State quarterback Jordan Love with the 26th overall pick in the 2020 draft. After referring to his future as a “beautiful mystery” late in the 2020 season, Rodgers skipped the Packers’ organized team activities and mandatory minicamp in a standoff with team management.

Rodgers reported for training camp on time but acknowledged his future with the organization was uncertain. At the time, he said he wanted to have a voice in the team’s decision-making process.

Rodgers recently has frequently offered compliments about the moves general manager Brian Gutekunst made to improve the team. Those moves included acquiring wide receiver Randall Cobb at Rodgers’ request. Rodgers said he got the sense there was better communication this season and that “I feel like my opinion mattered.”

“I think he put together a really nice team, a team that could have won a Super Bowl, and he deserves a lot of credit for some of the moves that he made,” Rodgers said after a January playoff loss to San Francisco. “I’m disappointed we couldn’t put it together for him and the organization tonight, and I’m disappointed it’s ending.”

Gutekunst agreed their relationship was in a good place.

“I feel really good about where we sit right now,” Gutekunst said before the NFL scouting combine.

Rodgers had a tumultuous 2021 season in a number of respects, particularly for comments he made about his vaccination status. When asked before the season whether he had been vaccinated against COVID-19, Rodgers replied, “Yeah, I’m immunized.” But after testing positive during the season, Rodgers acknowledged he was unvaccinated and said he instead had sought alternative treatments.

Rodgers also dealt with a fractured left pinky toe for much of the year, but continued playing at an All-Pro level. He threw 20 touchdown passes with no interceptions over his final seven regular-season games. He led the Packers to a 13-4 record and a third straight NFC North championship.

But his season ended with a disappointing playoff performance. The Packers scored a touchdown on the game’s opening series but never reached the end zone again in the home loss to the 49ers.

Packers coach Matt LaFleur, Gutekunst and president/CEO Mark Murphy said after the season they all wanted Rodgers back in 2022.

“I think we’ve got as good a shot as anybody to win a Super Bowl next year (with Rodgers),” Gutekunst said. “He’s the MVP of the league. That’s our goal. I think we have an opportunity to do it right now.”

LaFleur made a move seemingly aimed at keeping Rodgers when he brought back Tom Clements as quarterbacks coach. Rodgers had praised the 68-year-old Clements, who previously worked for the Packers from 2006-16 in roles that included quarterbacks coach (2006-11), offensive coordinator (2012-14) and associate head coach/offense (2015-16). Rodgers lauded Clements on multiple occasions over the last year.

Rodgers’ return would answer one giant question for the Packers as they head into a critical offseason. They’re well over the salary cap and have several key players with expiring contracts.

Gutekunst has said he believes the Packers could keep Rodgers and Adams while building a contending team around them. And they have done so.

“I think obviously everything around here kind of centers on the quarterback,” Gutekunst said before the combine. “It’s a big piece and a domino that kind of has to fall before we go down the other avenues. So, it’s important as we go through this and the puzzle pieces we have to try to make fit. That’s the first one to go.”