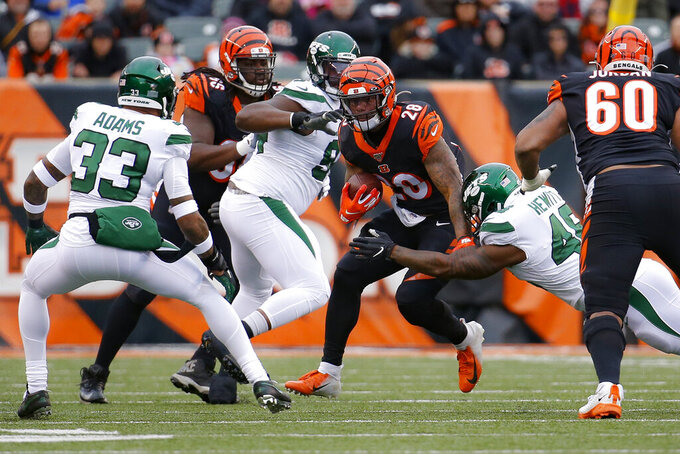 As for the team’s “next man up” philosophy? Well, now it’s more like: Who’s left?

Injuries have decimated the Jets at cornerback and safety, with Jamal Adams among the latest sidelined. The star safety sprained his left ankle early in New York’s 22-6 loss at Cincinnati last Sunday. Adams played through it, but wasn’t his usual playmaking self.

But, it’s unclear when Adams might be back — if he returns at all this season.

“I really think we just have to be very smart with this,” coach Adam Gase said. “I've talked to him and he has to really feel good for me to put him back out there.”

Adams was out of the walking boot he wore after the game, but sat out practice Wednesday. He considers himself day to day, although Gase said Monday it’s a “legit week to week” injury. Adams wouldn't confirm whether it's a high-ankle sprain, and Gase said he wasn't told that it was.

“I’m not going to get out there until I’m myself,” Adams said. “I don’t know when that is. We’re not going to put a timetable on it. I’m just going to continue to do whatever they ask me to do and I’ll go from there.”

Adams has never missed a game in his nearly three NFL seasons, and he said he didn’t at LSU or in high school, either.

“I just want to be out there,” he said of the possibility of sitting out Sunday against Miami. “I don’t really care about a streak.”

The injury bug has been a prominent story line this year for the Jets.

It has even spread to the team’s locker room, where one inflatable Santa Claus decoration was draped across the floor completely deflated. The other fell during media availability and became half-deflated. Linebacker Brandon Copeland tried, but couldn’t get the decoration upright again.

Yep, it has been that type of season.

Linebacker C.J. Mosley was placed on injured reserve Tuesday, giving New York a league-high 15 players on IR — including seven starters. While it appears too early to say whether Adams will join that dubious list, he could become the 17th Jets starter to miss at least one game this season.

Marcus Maye will likely move into Adams’ strong safety spot, and it’s unclear who’ll slide in at free safety. That’s because Matthias Farley, Maye’s backup, sat out practice with rib and ankle injuries. Blake Countess and Bennett Jackson, claimed off waivers Tuesday from Baltimore, are the only other healthy safeties. Rontez Miles (neck/hip) was placed on IR earlier this season.

“We’ve been dealing with it all year, so the guys coming in, they’ve got to be ready to go,” Maye said. “When new guys come in, we can’t miss a beat, so everybody’s got to be prepared and work hard this week to be ready when they get out there.”

The cornerback position has been hit even harder, with defensive coordinator Gregg Williams using five players at the two spots and four different combinations. That doesn’t include Brian Poole, who starts in the nickel package but is uncertain this week because he’s in concussion protocol.

Arthur Maulet has started the last four games, but left Sunday with a calf injury that appears likely to sideline him against Miami.

Bless Austin, a rookie who started the season on the reserve/non-football injury list after knee injuries his last two years at Rutgers, has suddenly become the one stabilizing presence at cornerback having started the last three games.

New York opened the season with Trumaine Johnson and Darryl Roberts as the starters, but Johnson struggled at times and went on IR last month with injuries to both ankles. Roberts returned last week after missing three games with a calf injury.

Nate Hairston is healthy and has started four games, but has been benched twice this season. Maurice Canady didn’t practice Wednesday with an illness and a quadriceps issue. The only other cornerback is Kyron Brown, who was inactive last Sunday after spending much of the season on the practice squad before being promoted three weeks ago.

“Yeah, it’s part of the game and it’s very tough, but I have a lot of faith in those guys,” Adams said. “The coaching staff is definitely going to move some things around if that’s what we need to do. Those guys, they’ll be fine, with or without me.”