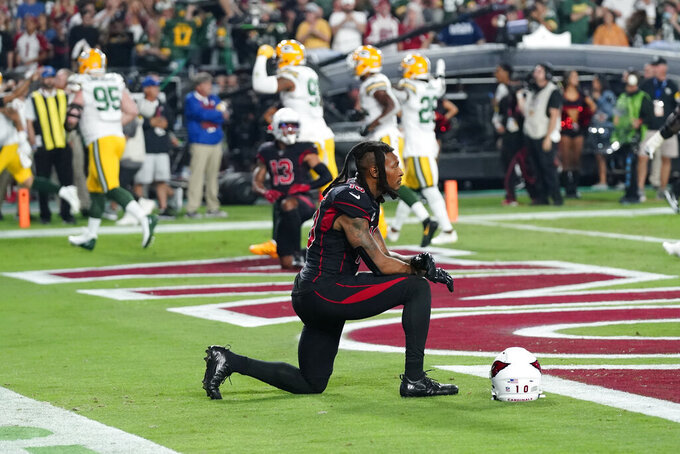 Arizona Cardinals wide receiver DeAndre Hopkins (10) kneels after the Green Bay Packers intercepted the ball in the end zone during the second half of an NFL football game, Thursday, Oct. 28, 2021, in Glendale, Ariz. The Packers won 24-21. (AP Photo/Ross D. Franklin)

TEMPE, Ariz. (AP) — Kyler Murray threw the football, A.J. Green never turned around and a golden opportunity for the Arizona Cardinals to move to 8-0 for the first time in franchise history instead ended with a gut-wrenching interception.

Maybe it's for the best.

The adversity after a tough loss comes sooner or later for just about every team in the NFL. The Cardinals made it to nearly November without that feeling, but now it's here after a 24-21 loss to the Green Bay Packers on Thursday night.

“We knew it would come at some point,” Murray said. "We fought the whole game. We just came up short. If we make the last play, we’re not talking about this. It is what it is.”

Make no mistake, Arizona (7-1) still looks like a good football team and a contender to win the NFC West. But the Cardinals also looked like a pretty good team last year after starting with a 6-3 record only to fade down the stretch, finish 8-8 and miss the playoffs for a fifth straight season.

“This is a very mature group,” Murray said. "We have a lot of old veterans, a lot of leaders on this team that I don’t think would let that happen, so I’m confident in us bouncing back and forgetting about this one.”

It's true that this version of the Cardinals has plenty of veterans and more talent than in 2020, but it's also a team that's getting beat up in a hurry. Defensive lineman J.J. Watt is likely out for the season with a shoulder injury, star receiver DeAndre Hopkins is nursing a hamstring injury and the Cardinals were using third-string center Sean Harlow against the Packers because of injuries to Rodney Hudson and Max Garcia.

Even Murray was limping by the end of the game, though he said he was fine.

Thanks to the Thursday night game, the Cardinals have a few extra days to rest before traveling to face the San Francisco 49ers on Nov. 7. That'll also give them some time to try to clean up issues like slow starts, costly penalties and occasionally poor tackling.

The Cardinals can't be perfect anymore, but they can still be very good.

Arizona's defense has shown an uncanny ability to come up with big fourth-down stops.

The only reason the Cardinals had a chance to win Thursday was because of a dramatic goal-line stand late in the fourth quarter. Devon Kennard batted away a pass by Aaron Rodgers on fourth down, which was the 11th in the past 15 tries that the Cardinals had denied the opposing team's fourth down try.

The Cardinals have had a nasty habit of slow starts throughout the season. They've fallen behind early in games several times this season, including against Vikings, Jaguars, Rams, Texans and Packers this season.

Arizona has proven talented enough to usually overcome those deficits, but it's a tough way to live.

RB James Conner. When the Cardinals need tough yards and big plays, Conner has delivered nearly every time. He had two touchdown runs against the Packers and provides a bruising style that's the perfect complement to the speedy Chase Edmonds.

WR Rondale Moore. The second-round draft pick has been the team's most exciting rookie this season, but his mistakes were costly against the Packers. The most obvious was when he misplayed a punt in the second quarter, allowing the Packers to recover possession and capitalize with a field goal.

Arizona's main concern is getting Hopkins and his bum hamstring healthy. The Cardinals have other playmakers, but there's no doubt Hopkins is the best.

Rookie LB Zaven Collins left the Packers game with a shoulder injury. The Cardinals hope to get some depth back on the offensive line in the coming days with the possible return of centers Hudson or Garcia.

RB Jonathan Ward has a concussion after a scary injury. He was carted off the field, but Kingsbury said the running back has movement in his extremities.

8 — Conner's eight rushing TDs this season rank second in the NFL behind Tennessee's Derrick Henry. The 6-foot-1, 233-pound back has been the perfect addition to Arizona's running game because of his bruising style.

It's no time to panic for the Cardinals, who didn't play particularly well and still nearly beat the 7-1 Green Bay Packers. Arizona needs to focus on getting healthy and fixing the slow starts, but this still looks like a team that can make the playoffs for the first time since 2015.