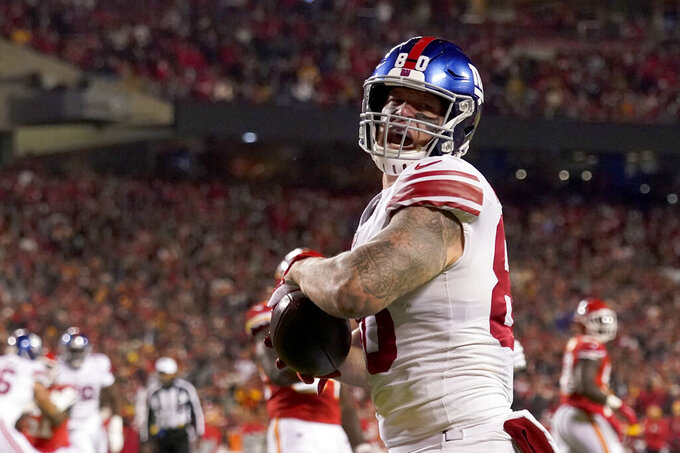 OPENING LINE: Las Vegas by 3, according to FanDuel SportsBook.

TURNOVER DIFFERENTIAL: Raiders plus-4; Giants plus-1.

RAIDERS PLAYER TO WATCH: WR Zay Jones. Jones will need to take a bigger role after starting receiver Henry Ruggs III was released after being charged in a fatal car crash. Jones has played just 21% of the offensive snaps this season with six catches for 115 yards and a TD.

GIANTS PLAYER TO WATCH: RB Devontae Booker. Players tend to have good games against their former teams. The running back had a career-high 125 all-purpose yards against Kansas City and he probably will continue to be the No. 1 back with Saquon Barkley dealing with an ankle injury and now in the COVID-19 protocol. ‘Book’ ran for 423 yards and three TDs with Las Vegas last season.

KEY MATCHUP: New York secondary against Las Vegas QB Derek Carr, who is hitting almost 68% of his passes for 2,269 yards, 12 touchdowns and five interceptions. New York played a two-deep zone most of the time against the Chiefs' Patrick Mahomes and did not allow any big scoring plays. Do the same things against Las Vegas and the Giants have a chance.

KEY INJURIES: Raiders TE Darren Waller is expected back after missing one game with an ankle injury. ... RB Josh Jacobs also should play after leaving the previous game early with a chest injury.

SERIES NOTES: What made the last meeting historic was the struggling Giants benched Eli Manning, ending his streak of 210 consecutive starts. It was the second longest run in NFL history behind Brett Favre's 297 starts. Geno Smith, now in Seattle, made the start. A day after the game, the 2-10 Giants fired coach Ben McAdoo and general manager Jerry Reese.

STATS AND STUFF: The Raiders' Rich Bisaccia can become the first head coach to win his first three games since Gary Moeller took over in midseason and led the Lions to three straight wins in 2000. ... The only Raiders coaches to start 3-0 were John Madden (1969) and Bill Callahan (2002). ... The Raiders followed back-to-back double-digit losses with two straight double-digit wins for the first time since 1992. ... The Raiders are off to their best start since 2016, when they were 10-2. ... Las Vegas has an NFL-worst 3-15 mark coming off the bye over the past 18 seasons and has been outscored by 20.5 points per game in losing the last four. ... Las Vegas DE Yannick Ngakoue has multiple sacks in two of the past three games. ... Raiders TE Foster Moreau had career highs with six catches for 60 yards in his last game. ... Las Vegas RB Kenyan Drake has 152 yards from scrimmage and three TDs the past two games after being held to 14 yards on four touches the previous two weeks. ... The Raiders haven’t allowed at least 30 points in any of the first seven games for the first time since 2001. ... The Raiders have multiple takeaways in back-to-back games for the first time since doing it in three straight games in 2019. ... The Giants have won three of the last four against the Raiders. ... The Giants had a season-high 10 penalties Monday. ... Daniel Jones has a 90-plus quarterback rating in three of the four games at home. ... Golladay had 132 yards receiving and a TD in 2019 in his only career game against the Raiders while with Detroit. ... TEs Evan Engram and Kyle Rudolph each caught his first touchdown of the season Monday. ... DL Leonard Williams had a sack and forced fumble against the Chiefs. He has seven sacks in his last five home games. ... CB James Bradberry has fumble recoveries in two straight games. ... S Logan Ryan had a forced fumble in Kansas City. ... CB Adoree Jackson had a career-high 12 tackles Monday.

FANTASY TIP: The Giants have struggled against good quarterbacks, so put Carr in play. He completed 31 of 34 passes for 323 yards, two touchdowns and an interception in his last start. His 91.2% completion percentage ranks as the second-highest single-game mark all-time in games in which a quarterback attempted at least 30 passes.