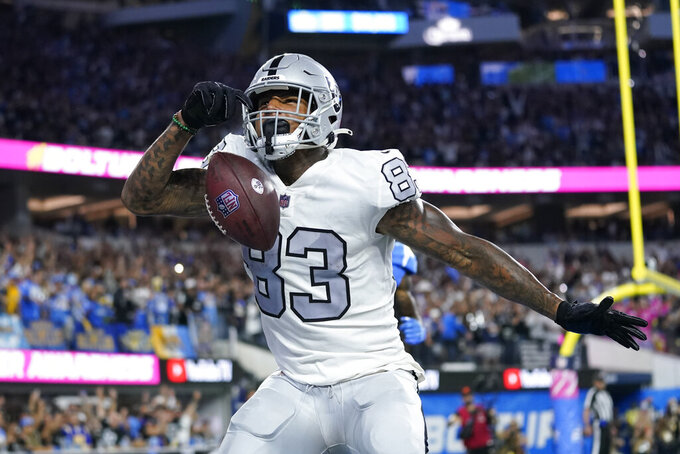 OPENING LINE: Raiders by 5, according to FanDuel SportsBook.

BEARS PLAYER TO WATCH: WR Darnell Mooney. The second-year receiver leads the Bears with 17 catches for 226 yards this season. He had a career-high 125 yards receiving last week, including a 64-yarder from Justin Fields.

RAIDERS PLAYER TO WATCH: WR Henry Ruggs III. Ruggs has already caught four deep passes (at least 20 yards downfield) this season, just one shy of the league lead and his total from all of last season. Ruggs had a 51-yard catch and drew a 45-yard pass interference call last week.

KEY MATCHUP: Bears edge rusher Khalil Mack vs. Raiders RT Brandon Parker. Parker is expected to get the start at tackle with struggling rookie Alex Leatherwood expected to move to guard. Parker has had issues in pass protection in his three seasons and should have a tough test against Mack. Mack, the 2016 Defensive Player of the Year when he played for the Raiders, has four sacks the past three games.

SERIES NOTES: The Raiders shut down Mack when the teams met in London in 2019 in the first matchup after his 2018 trade to Chicago. Mack had three tackles and one QB hit. ... Raiders RB Josh Jacobs ran for 123 yards and two TDs in that game. ... The Bears will make their first appearance in Las Vegas.

STATS AND STUFF: Fields threw for 209 yards to get his first win last week after throwing for just 68 in his first career start. ... The Bears have allowed sacks on a league-worst 13.7% of pass plays. ... Chicago's defense has 14 sacks the past three weeks and a league-best 15 on the season. ... The Bears are the only team with two players with at least four sacks: Robert Quinn (4 1/2) and Mack (4). ... Chicago WR Allen Robinson has at least one catch in all 92 games he's played for the second-longest active streak to DeAndre Hopkins (130). ... Bears CB Jaylon Johnson ranks tied for second in the NFL with six passes defensed. ... Chicago K Cairo Santos has made 32 straight FGs in the regular season for a Bears record and the longest active streak in the NFL. ... Raiders QB Derek Carr has tied a franchise record by throwing at least two TD passes in five straight games. ... The Raiders rank 31st in the league averaging 3.25 yards per carry, their lowest mark after four games since 1993 (3.04). ... Las Vegas TE Darren Waller has 21 targets the past three weeks after getting 19 in the opener. ... The Raiders haven't scored on the opening drive in 10 straight games and have scored only five points in the first quarter all season. ... Las Vegas had only 213 yards of offense last week after leading the league with 471 per game the first three weeks.

FANTASY TIP: Bears RB Damien Williams could get a big load this week with Montgomery injured. Williams had 70 yards from scrimmage and a TD last week. The Raiders allowed 169 yards rushing to the Chargers.