After Pro Bowl season with Jets, Myers lands back in Seattle 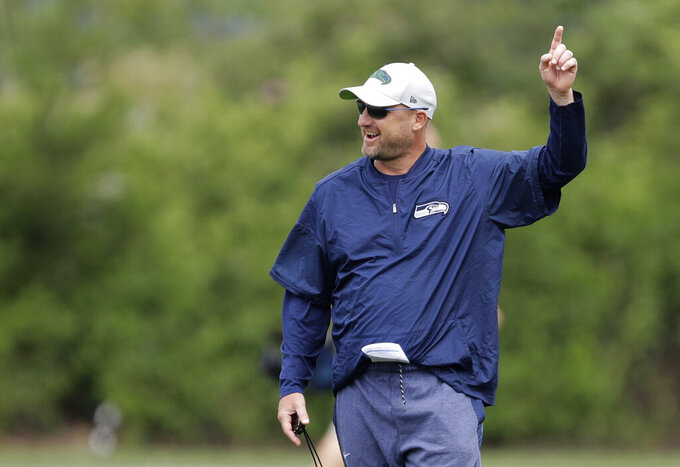 RENTON, Wash. (AP) — When kicker Jason Myers became a free agent in the offseason following a Pro Bowl campaign last season, Seattle was near the top of his destination list.

Good thing for Myers that Seattle special teams coordinator Brian Schneider had the kicker as the clear top option for solving the Seahawks' kicking situation.

"The way I looked at it, when I evaluated college kickers, I had Jason Myers at the top of my board," Schneider said Thursday.

A year after losing a training camp competition in Seattle and watching Sebastian Janikowski claim the job, Myers is back with the Seahawks. But this time there is no competition.

Coming off a season where Myers hit 33 of 36 field goal attempts and earned the first Pro Bowl selection of his career, the Seahawks are banking on Myers to solidify an unsettled position.

"It feels the same. I was very comfortable with everybody last year. Big part of the reason why I came back," Myers said. "Everything kind of felt like I never left in a way so just kind of building off what we did last year."

Seattle has sought stability at the kicking position since losing Stephen Hauschka in free agency after the 2016 season. The Seahawks opted for the Blair Walsh experiment in 2017, but he missed eight field goals that season, including missed kicks that played a major role in three Seattle losses. Last year, the Seahawks brought in Janikowski and Myers to compete for the job, but ultimately went with the veteran in what turned out to be his final season before retirement.

Schneider said Seattle tracked every kick from offseason workouts through the early preseason games last season and Janikowski won the job in the eyes of the team.

"It was fair, they told me to come out here and compete and that's what I do. I do that whether it's just me out here or somebody else," Myers said. "I'm always trying to get better personally. That's what I was doing last year and what I'm going to try and do this year."

He was the first Jets kicker to be selected to the Pro Bowl in franchise history.

"(It was) a fresh start, kind of. What I went through two years ago, I took it as more of a learning experience than trying to get down on myself for getting let go in Jacksonville," Myers said. "I took that as a positive and I knew I was hitting the ball well out here last year and it kept clicking back there in New York."