After uncertainty, K.J. Wright happy to still be in Seattle 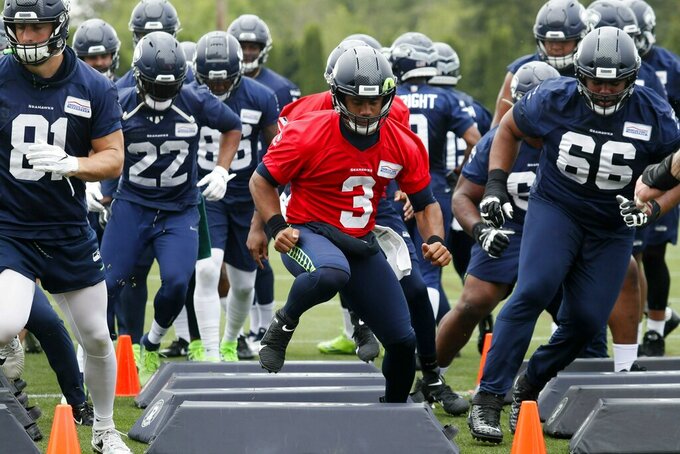 RENTON, Wash. (AP) — At this time a year ago, K.J. Wright was entering a contract year with no certainty he would stay with the only team he'd ever played for.

Then he got hurt during preseason. And needed surgery. And had a setback, and got to the point of resigning himself to the idea his career with the Seattle Seahawks was over once last season ended.

"As soon as I knew I had to have surgery I was like, 'Dang, this is not very good.' Contract year, surgery, five games, all those signs say, 'Thank you for your services but we've got to move on,'" Wright said.

But Wright is still in Seattle. He's healthy and taking part in offseason workouts and the happy recipient of a two-year contract that likely means Wright will play his entire career with one team.

For the longest-tenured Seahawks player currently on the roster, and one of the few remaining holdovers from its Super Bowl-winning team, it's a meaningful opportunity.

"I didn't see it happening. I thought I was going to be in a different color jersey. But they love me here," Wright said on Wednesday.

"I'm glad they love me and they know what I bring to the table. I'm still a hell of a linebacker and can make plays all over the field. You all saw the last few games and found a way to make me happy. Everything is good."

Wright's future was uncertain after playing in just five games last season due to a knee injury. Before the injury troubles of 2018, Wright was incredibly durable for Seattle having started 63 of the previous 64 regular-season games. Wright, who will turn 30 years old this summer, was selected to the Pro Bowl in 2016 when he had 124 tackles and four sacks.

Wright said at the end of last season he intended to test the free agent market to see where his value stood. But he also had indicated a desire to play his entire career in one place and continue to team with middle linebacker Bobby Wagner.

"What I went through last year really put things in perspective for me, to approach every game, every practice with gratitude because you just never know when something may happen and it could be your last play," Wright said. "I'm really thankful. I'm just going to go into this season and have fun. Just enjoy it."

Wright is also providing some advice for Wagner as he goes through his own contract situation. Wagner has been present for Seattle's entire offseason program, but is not participating because he is entering the final season of his contract, a move his longtime teammate supports.

Wright said he believes attending the offseason program and participating in training camp last year entering a contract year — rather than holding out — helped when it came time for Seattle to offer him a new deal.

"I think it played a lot into it," he said. "You have a guy who stayed true to himself, was there for the team. At the end of the day it doesn't really matter, but it doesn't hurt you. If anything it helps you."

NOTES: Seattle signed RB Marcelias Sutton, an undrafted rookie out of Oklahoma and waived/injured RB Adam Choice. ... QB Geno Smith was back after missing last week's open OTA practice due to a family issue. Smith is in competition with Paxton Lynch for the backup job behind Russell Wilson. ... A special guest at practice on Wednesday was Seattle native and actor Rainn Wilson. The former star of "The Office" even held for a 38-yard field-goal attempt by kicker Jason Myers, which was good.