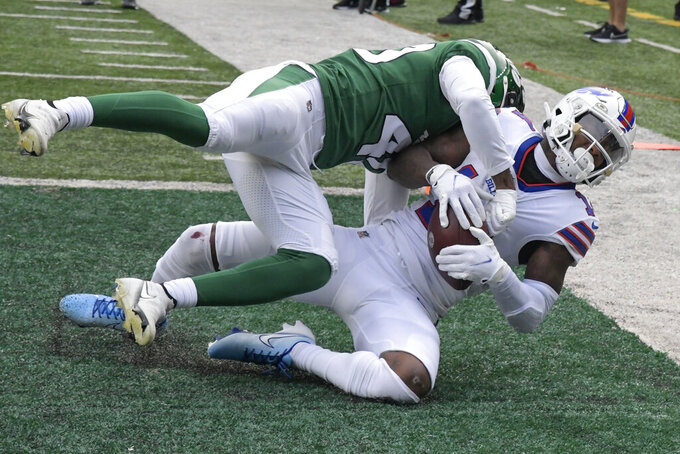 ORCHARD PARK, N.Y. (AP) — It wasn't long into a photo session when Stefon Diggs had the bright idea to jump on Josh Allen’s back to help depict the tight bond between the Buffalo Bills teammates.

The image of a beaming Diggs and surprised Allen was so compelling, it graced the cover of Sports Illustrated Kids' “BFF” issue a few months ago.

“I just jumped on his back because he’s damn sure not jumping on mine,” Diggs said with a laugh, as Buffalo prepares to host Indianapolis on Sunday. “I mean he’s 6-foot whatever and 200-whatever pounds, and I’m pretty light, so he’ll be all right.”

Allen enjoyed how the image turned out, especially considering he isn’t comfortable being on magazine covers.

“I’d do anything for my guy,” Allen said. “It’s a really cool picture and that’s one of those cool moments that you get.”

The two spend time going out to dinner, playing video games and coming up with new handshakes in a friendship that blossomed shortly after Buffalo acquired Diggs in a trade with Minnesota in March 2020.

They are as tight off the field as they are on it, which everyone — the New York Jets secondary in particular — was reminded of last weekend when Allen figuratively jumped on Diggs’ back in a 45-17 win.

Allen enjoyed his most efficient outing of the season, going 21 of 28 for 366 yards and two touchdowns. And Diggs had eight catches for 162 yards and a touchdown.

At a time when Buffalo's offense needed a jolt coming off a 9-6 loss at Jacksonville, the Bills' dynamic duo provided a resounding response.

As much as Buffalo spent last week placing an emphasis on improving its running attack and being more physical at the line of scrimmage, it also became apparent how getting Diggs more involved makes the offense hum.

“Anytime Diggs gets in his little moods, you can automatically see immediately, we know it’s going to be good day,” left tackle Dion Dawkins said. “Not to say when he’s not juiced that it’s a bad thing because even on his off day he’s still on. But when he’s at his peak, it feeds everybody.”

And that’s what Dawkins saw Sunday.

The Allen-to-Diggs connection has had its share of bumps this season a year after the two set numerous single-season team records, with Diggs becoming Buffalo’s first player to lead the league in both yards receiving and catches.

Through nine games this season, Diggs still leads the team with 56 catches for 750 yards, and ranks second with four touchdowns receiving. However, he has topped 100 yards just twice, as compared to seven times last season. And his run of six or more catches a game ended at 14 in Week 2, when Diggs had four in a 35-0 win over Miami.

Allen and coordinator Brian Daboll insist they’re not doing anything different by targeting whoever is open, especially when Diggs is double-covered. And yet, Diggs had no difficulty finding ways to get open when being blanketed last year.

Diggs hasn't complained about his dip in production. As a team captain for the first time in his career, he has maintained all season the Bills have plenty of threats, and it’s his job to make the most of however many opportunities he gets.

He repeated that Wednesday in downplaying his most recent performance.

“I’ve had my highs, I’ve had my lows, and coming off (last) year, people expected that to happen on an everyday occasion,” Diggs said. “So I just kind of take the good with the bad and roll with the punches, because it’s not always going to be flowers and candy.”

Diggs then provided a glimpse into his competitive nature by adding: “But, of course, if the opportunities come, I’m taking full advantage.”

Allen and Diggs were so in synch on Sunday that when the receiver landed out of bounds in the end zone on second-and-10 from the Jets 12, the two went back to the same play to score a touchdown.

Allen’s level of trust in Diggs is unquestioned.

“The more I can throw to him, it seems like the more success we have,” Allen said. “And I’m going to trust him on those 50-50 balls, and place it with everything I have. More often than not, he’s either coming down with it or nobody is.”

Diggs has been a calming presence for Allen when the quarterback is searching for his rhythm. He'll will come up with a joke or tell Allen to pretend they’re playing catch in the backyard.

“As a receiver, you don’t benefit at all from your quarterback being rattled. So I just do my part to keep him even keel,” Diggs said. “His mind is sometimes all over the place, and I can see him staying in the moment where you just got to be a friend.”

NOTES: Offensive tackle Bobby Hart was signed by Buffalo on Friday after being waived by Tennessee this week. The seventh-year player rejoins the Bills after being cut in August. Buffalo filled a need at tackle with starting right tackle Spencer Brown being placed on the COVID-19/Reserve list on Thursday.