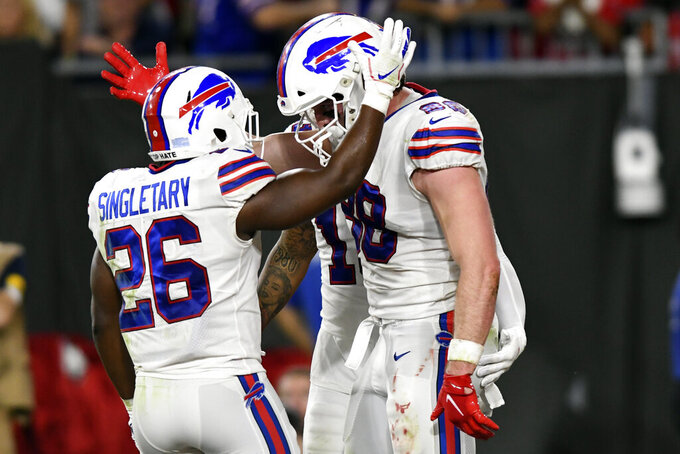 TAMPA, Fla. (AP) — Josh Allen put together an amazing performance despite playing much of the game with a leg injury.

Allen threw for 308 yards and two touchdowns and ran for 109 yards and a touchdown in the Buffalo Bills' 33-27 overtime loss to the Super Bowl champion Tampa Bay Buccaneers on Sunday.

The quarterback drew more attention postgame when he came into his media session wearing a walking boot on his left foot.

A Bills victory looked like a hopeless cause at the half with Buffalo trailing 24-3. Then Allen, who became the fourth player in league history to throw for over 300 yards and also rush for 100-plus in the same game, spearheaded a stunning comeback that fell just short.

“I’m damn proud of our team and how we fought in that second half,” Allen said.

Allen had an 18-yard TD run in the third period, added TD passes of 15 yards to Dawson Knox and 4 yards to Gabriel Davis to cut the deficit to 27-24 with just under five minutes left in the fourth.

“He's more like Cam Newton, but with a bigger and stronger arm,” Bucs coach Bruce Arians said of Allen. “We talked about the designed quarterback runs are tough. I wouldn't put my quarterback in that much of harm's way. They did a heck of a job with it.”

Buffalo got the ball back with 3:05 left and put together a 70-yard drive to force overtime with a 25-yard field goal.

“He’s our general, for sure,” Buffalo running back Devin Singletary said.

Momentum appeared to be on the Bills' side when they won the coin toss to get the ball first in overtime. But after a three-and-out, Buffalo punted and Tom Brady completed a six-play, 94-yard drive on Breshad Perriman’s 58-yard catch-and-run with 5:31 left — the 700th TD pass of Brady’s career, including playoffs.

“They made one more play than we did.” Allen said.

The Bills realize time is running out in the playoff race, and they need a surge over the regular-season's final four weeks. Buffalo (7-6) hasn't looked like the 2020 team that won its first division title since 1995 and enjoyed its deepest playoff run in 27 years before losing to Kansas City in the AFC championship game last January. The Bills are 3-5 over their last eight games, including now their first two-game losing streak of the season

“The resiliency of this team is pretty amazing, but we also know there’s a sense of urgency,” Buffalo center Mitch Morse said. "We’re really in crunch time here. We know what we’ve got, but we have to put something together if we want to keep taking steps toward achieving our ultimate goal.”