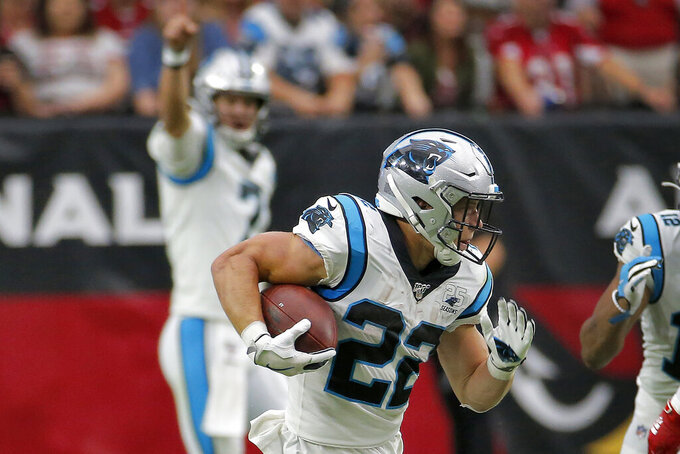 Carolina Panthers quarterback Kyle Allen, rear, begins to celebrate as running back Christian McCaffrey (22) breaks free for a 76-yard touchdown run against the Arizona Cardinals during the second half of an NFL football game, Sunday, Sept. 22, 2019, in Glendale, Ariz. (AP Photo/Rick Scuteri)

CHARLOTTE, N.C. (AP) — Panthers coach Ron Rivera knew he was going to field some tricky questions about whether to stick with Kyle Allen at quarterback following a fantastic performance Sunday against the Cardinals or go back to struggling 2015 MVP Cam Newton.

So Rivera did the wise thing, avoiding any potential controversy by announcing minutes before his Monday news conference that Newton will not play this Sunday at Houston.

Now Allen can focus on starting and Newton on getting healthy.

The reality is it would have been extremely difficult, if not impossible, for Rivera to bench Allen after he rejuvenated Carolina's stagnant offense in a 38-20 win over the Cardinals. Allen did what Newton failed to do in the Panthers' first two games — throw touchdown passes and deliver a victory.

After a turnover on the first drive, Allen was near perfect completing 19 of 26 passes for 261 yards and four TDs, finishing with a 144.4 quarterback rating.

For a quarterback with two career starts, Allen is remarkably poised. He made good decisions, his throws were accurate and he again proved the moment wasn't too big for him, improving to 2-0 as an NFL starter.

And, equally as important, his teammates rallied around him.

"He's real confident in who he is as a football player," Rivera said. "... He's got a lot of swag, which is kind of interesting when you watch him, and he's been able to back it up."

So the question becomes if Allen continues to shine will Rivera go back to Newton, the team's franchise QB, when he's healthy enough to play?

Rivera is on record saying he will.

"He's our quarterback and he's who we rely on," Rivera said of Newton. "But for now we're going to stick with Kyle and we'll keep rolling and see how things unfold as we go forward."

But it's often difficult to bench a hot player, and if Allen continues to win it will make Rivera's decision more difficult down the road.

The Panthers used a few different alignments designed to confuse the inexperienced Murray and it worked. Six of the eight sacks were by outside linebackers — three by Mario Addison, two by Christian Miller and one by Brian Burns.

"I thought that the things we did with our coverage, our secondary handled it very well," Rivera said. "We mixed our coverages as much as we could, tried to give them different looks and confuse them a little bit."

Admittedly, this is nitpicking a little bit after an otherwise dominant offensive performance against the Cardinals, but the Panthers could certainly stand to get off to some stronger starts. They have scored just three points in the first quarter this season.

Panthers 34-year-old tight end Greg Olsen is showing he's still a force after missing 16 games over the previous two seasons after twice breaking a bone in his foot. Some thought he might retire and pursue a career in broadcasting. Instead, Olsen has come back as strong as ever. Over the past two games, Olsen has 185 yards receiving on 12 receptions and two touchdowns, both of those coming against Arizona.

Daryl Williams is now being forced to split time at left tackle with rookie Greg Little, who has recovered from a concussion. Williams, who is trying to bounce back from a torn ACL that sidelined him last season, lost his full-time gig after allowing sacks on back-to-back plays against the Buccaneers in Week 2. Rivera was non-committal about what the Panthers will do moving forward, but it's pretty clear Little figures into those plans either as a platoon player or starter.

Panthers right guard Trai Turner got his ankle rolled up on against Arizona and his status moving forward remains uncertain. The Panthers will also be monitoring previous injuries to defensive tackle Kawann Short (shoulder), outside linebacker Bruce Irvin (hamstring) and safety Rashaan Gaulden (neck), all of whom missed Sunday's game.

188 — Total yards from scrimmage for Christian McCaffrey, who may be the best back in the league now that Saquon Barkley is hurt. McCaffrey continues to impress as a multi-threat running back, ripping off a career-long, backbreaking 76-yard TD run against the Cardinals. McCaffrey is averaging 150 yards per game from scrimmage with three touchdowns.

The Panthers beat the winless Cardinals, but now must show they can handle a potential playoff team like the Texans (2-1) on the road. If the Panthers can win, they have a manageable couple of games against the Jaguars (home) and Buccaneers (in London) before the bye week, making a 4-2 start a possibility.