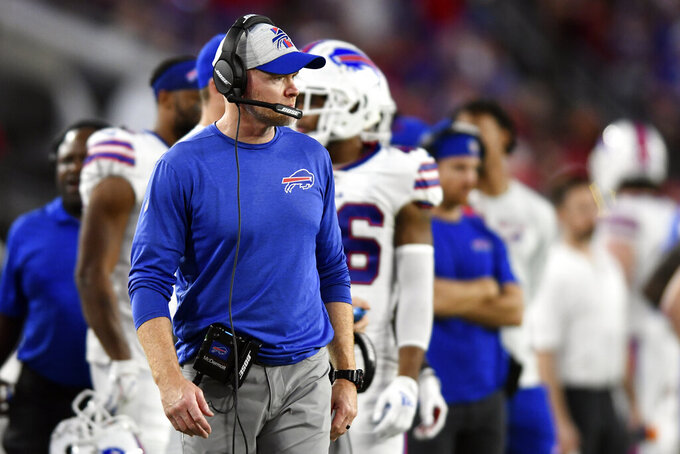 ORCHARD PARK, N.Y. (AP) — The mere sight of Josh Allen limping into the post-game interview room with his left foot in a protective boot cast an ominous cloud over the Bills’ hopes of remaining in the playoff picture in the final four weeks of the season.

A day later on Monday, coach Sean McDermott was unable to shed much light on Allen’s status, announcing the quarterback has a sprained foot and leaving open he'll have “a chance” to play Sunday, when Buffalo hosts Carolina.

“I talked to the medical team and, you know, he has a chance, we’ll just see where that goes,” McDermott said, noting Allen was still feeling sore. “We’re just going to take it one day at a time here,”

Though Allen shrugged off the injury sustained in a 33-27 overtime loss at Tampa Bay by saying, “I don’t think it’s going to be a big deal,” the very chance of the quarterback’s mobility being hampered — let alone potentially missing a game — is cause for concern.

The Bills might draw inspiration from how they rallied from a 24-3 halftime deficit to nearly beat old nemesis Tom Brady and the defending Super Bowl champions. The trouble is, Buffalo (7-6) still came away with its third loss in four outings while maintaining a slim hold on the AFC’s seventh and final playoff berth.

Then there's Allen's uncertain status. If he can't play, the Bills would turn to Mitchell Trubisky, who signed with Buffalo this offseason after an up-and-down four-year stint with the Chicago Bears.

Though Trubisky might have the pedigree of being selected No. 2 in the 2017 draft, he would have big shoes to fill in replacing Allen in an offense which places an emphasis on the quarterback being a dual threat.

Allen was hurt while being pushed out of bounds following a 22-yard run in the final minute of the second quarter. Playing through the injury, Allen still accounted for 109 of the team’s 173 yards rushing, plus a score, marking the third time this season he’s generated more than 50% of the team’s ground attack.

As a passer, Allen had career highs with both 36 completions and 54 attempts for 308 yards passing and two touchdowns. And he had the Bills in position to win in regulation before failing to connect with a well-covered — and possibly interfered with — Stefon Diggs in the end zone on third-and-2 from Tampa Bay’s 7. Buffalo settled for an overtime-forcing field goal with 22 seconds remaining.

While the Bills focused on the resilience they showed in mounting a second-half comeback, and a belief it can become a springboard to a playoff push, familiar warts remain apparent on both sides of the ball.

Buffalo’s run defense imited the Bucs to 137 yards rushing, and yet still allowed Leonard Fournette to score on a game-opening 47-yard run. It was reminiscent of Damien Harris scoring on a 64-yard run in Buffalo’s 14-10 loss to New England a week earlier.

The Bills are still having trouble overcoming deficits. Buffalo is 1-6 when trailing at any juncture of a game this season as opposed to going 7-3 last year.

McDermott was encouraged despite the loss.

“I’ll reiterate what I said after the game, I was impressed with the way that the guys rallied and played and really stepped up. They played with really one heartbeat, and that was fun to be a part of, fun to watch,” he said. “We had a a chance to win the game, at the end there, multiple chances, in fact, to win the game. So at the end of the day we just came up a little bit short.”

The Bills finally electing to run the ball wide rather than up the middle, where they usually get stuffed. Devin Singletary broke off a 29-yard run by following his blockers and beating the Bucs' defense up the right sideline in the third quarter.

Game management. The Bills flubbed a fake punt attempt with Matt Breida tripped up for a 3-yard loss to end their opening drive of the second half at Buffalo’s 42. McDermott could be second-guessed for not having his offense attempt to convert the fourth down, especially after it succeeded on a fourth-and-1 on Buffalo's next possession.

WR Cole Beasley broke out of a slump with nine catches for 64 yards following a four-game stretch in which he combined for 12 catches for 95 yards.

MLB Tremaine Edmunds. Aside from not being in position to stop Fournette scoring a touchdown, Edmunds lost a step in covering Breshad Perriman cutting across the middle for the deciding TD.

Aside from Allen, WR Emmanuel Sanders sprained his knee and is expected to not play this week.

5-0 — Bills record when scoring a touchdown on their game-opening possession.

The Bills' margin for error has grown thin with five teams now at 7-6, followed by the Pittsburgh Steelers (6-6-1). Buffalo can’t afford to look beyond the Panthers (5-8) with a rematch against AFC East-leading New England looming on Dec. 26.