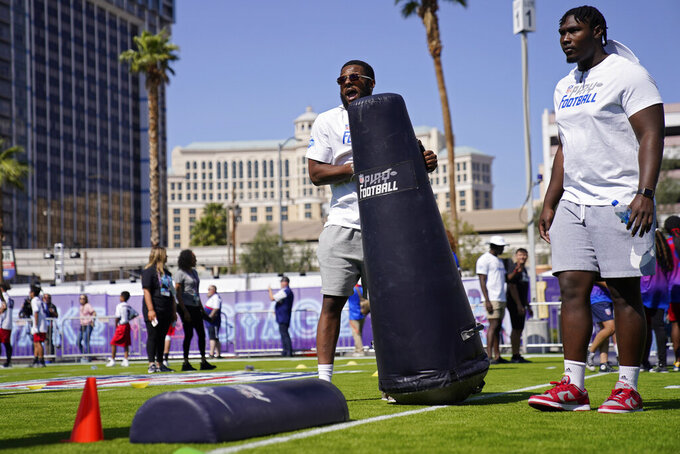 LAS VEGAS (AP) — Very little is certain heading into an NFL draft. Not that the prospects on hand seem to care.

There's a level of confidence that, for them, Thursday night's first round is a sure thing.

“I know I am the best cornerback in this draft,” Cincinnati's Ahmad Gardner said Wednesday, a massive necklace spelling out his nickname “Sauce” wrapped around his neck. “I feel like I can dominate whoever is in front of me.”

Not many players figure to be selected in front of him, though all of the 20 men on hand for a Play 60 event with local youths and Commissioner Roger Goodell believe they have shown the goods to be a high first-rounder. Even the very first pick, which for the second straight year Jacksonville owns.

“Oh yeah, in college I thought about being No. 1 for sure,” acknowledged Michigan edge rusher Aidan Hutchinson, considered along with Georgia defensive end Travon Walker as the probable top pick. “I've just been trying to put myself in that position.”

Hutchinson laughed when asked if going atop the draft would be even more satisfying than finally beating Ohio State, which the Wolverines did in November.

The self-faith that the very-soon-to-be pros exhibited matched their level of performance on the field in college. A vast majority of them went to big-time football programs in major conferences, and played for a variety of championships. Big games were common for, say, any of the multitude of Georgia Bulldogs and Alabama Crimson Tide and Ohio State Buckeyes players attending the draft in Las Vegas.

Linebacker Nakobe Dean, a key contributor to Georgia's national title, noted that as many as 15 of his teammates might be drafted.

Asked how he will react if he hears his name called by Goodell on Thursday night — the second and third rounds are Friday night, the final four rounds Saturday — Dean didn't see the need to replace the word “if” with “when.” But it was clear in his response.

“I'll share the moment with all of my teammates,” he said. “We all talked about when we first got to college. Win a championship and then go the NFL and get drafted in the first (round). You've got to have that confidence about yourself, period. Even guys who are at a Division III school. If you don't believe in yourself, no one will.”

There is no Division III player in Las Vegas — at least none who was invited by the league — but plenty of guys who are accustomed to the big stage and crucial games are present.

Notre Dame safety Kyle Hamilton, who easily could go in the top 10, believes such a background can only help in the adjustment to the professional ranks.

“Every week and wherever we would go, it was a big game,” he said, adding with a chuckle that "people either love us or hate us, mostly hate us. So we played with that chip on our shoulder. At Notre Dame, we're used to the spotlight. And every game in the NFL is a big game.

“I've always watched the draft since I can remember. To be taken on the first day of the NFL draft will be very satisfying.”

It's likely that not all 20 players attending will go in the opening round. Rarely does everyone invited by the NFL wind up a first-rounder.

That's how speculative this grab bag is, especially this year when there is no slam dunk prospect, particularly a passer.

Naturally, that's not how any of the players are thinking. They refer to their pedigree, to what they showed on the field in games, and their performances in draft-evaluation workouts.

“There's no strain or stress at all,” said Jermaine Johnson, the dynamic edge rusher from Florida State who played the 2019 and '20 seasons at Georgia before transferring. "Just enjoying it, living the dream.

“Teams see I am a complete player, can pass rush, but affect the game not just in the passing game but I will shut down one side of the field in the running game. You've got to take away another man's will and show him that you won't ever give up. That's what I live for.”