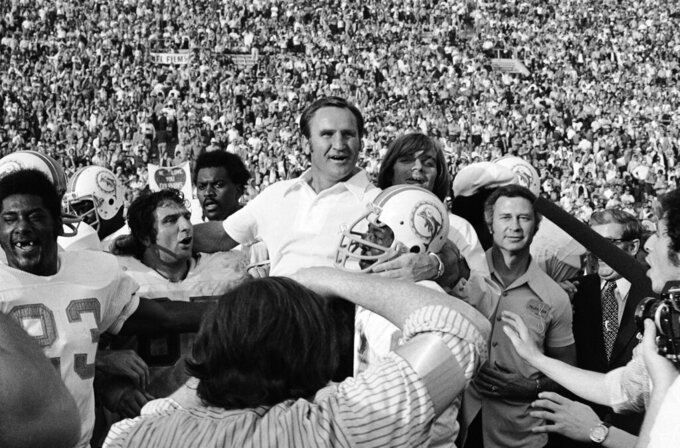 FILE - Miami Dolphins coach Don Shula, center, is carried off the field after his team won the NFL football Super Bowl game over Washington Redskins in Los Angeles, Jan. 14, 1973. It can be argued — and has been for decades — that a perfect record including winning a championship makes that team the best in its sport. And maybe the 1972 Miami Dolphins wouldn't have matched up with, say, the great Steelers dynasty of the later 1970s. Or the dominant 49ers of the 1980s. Or the Cowboys Triplets of the 1990s. No matter: Miami owns the only unblemished record in the Super Bowl era. (AP Photo/File)

LOS ANGELES (AP) — Rams assistant coach Wes Phillips knows only too well just how difficult — and rare — reaching a Super Bowl can be.

His grandfather, Bum, never got to the NFL’s biggest game, losing two AFC championship games as coach of the then-Houston Oilers. His own father, Wade, coached 42 seasons and made it to three Super Bowls, winning only one.

“So I’m just grateful for this opportunity,” Wes Phillips said. “Fifteen years in the league, and this is my first opportunity to play in Super Bowl. Actually, it was the first year that I was on a team that went past the divisional round."

With former Miami coach Brian Flores suing the NFL alleging racism hiring practices, this Super Bowl offers a reminder that family ties can play a big role in creating business opportunities for men moving in and up in this league.

— Rams coach Sean McVay. His grandfather John not only was head coach of the New York Giant for three seasons in the 1970s, he also was general manager for five Super Bowl championships with the San Francisco 49ers in the 1980s and 1990s.

— Cincinnati offensive coordinator Brian Callahan. His father Bill is a former head coach of the then-Oakland Raiders and Washington. The elder Callahan was the Raiders' head coach when they lost to Tampa Bay in the 2003 Super Bowl.

— Bengals coach Zac Taylor. He started as a graduate assistant at Texas A&M for Mike Sherman and followed his father-in-law to the NFL when Sherman was hired as Miami Dolphins offensive coordinator. Taylor stayed with the Dolphins after Sherman was fired. His brother, Press, is a senior offensive assistant for the Indianapolis Colts.

Phillips is the Rams' tight ends coach and passing game coordinator. He got his NFL start in 2007 working as a quality control/offensive assistant with his father as head coach in Dallas. Phillips stayed three more seasons in Dallas after Wade was fired.

He worked his way to assistant offensive line coach, special teams assistant, and finally got his first position group as tight ends coach in 2013 working with Jason Witten.

Being the son and grandson of NFL coaches certainly helped Phillips a lot. Imagine all the conversations at home, especially when watching a football game together. Clock management and timeouts were big topics.

A master class in football.

“It wasn’t like I was at home drawing up things on the grease board, really, with him," Phillips said.

Coaches' sons do get other opportunities. Phillips went to the team facility, sitting in on some meetings. He also was a ball boy during training camp.

Darrin Simmons, the Bengals' special teams coordinator, got the chance to help out for a couple years at Browns' training camps. His connection? His uncle, longtime Cleveland Browns strength coach Jerry Simmons.

“All through my high school days growing up, we would go out during training camp and help him ... with stuff in the weight room,” Simmons said.

Callahan also grew up around the NFL. Watching his father influenced his decision to go into coaching, especially when his own playing career peaked as a walk-on quarterback at UCLA who later earned a scholarship.

His father called to congratulate him when the Bengals beat Kansas City in overtime at the AFC championship game, earning Cincinnati’s first Super Bowl berth since the 1988 season. His father’s best piece of advice was to focus on the job he has and do his best, not worrying about what’s next.

“Certainly my dad has been a huge influence on me personally and professionally,” Callahan said. “He’s my mentor kind of in all facets. There’s probably a long list I could get you, but that’s probably one of the most important ones.”

Growing up inside the NFL also means the chance to meet other coaches. Phillips credits Dan Reeves, his father’s boss in Denver and later Atlanta, as being a big influence. Thanks to his grandfather and father, Phillips knew well that Reeves played for Dallas coaching legend Tom Landry.

“You could see the attention to detail on the practice field,” Phillips recalled of Reeves, who passed away on New Year's Day. “He was demanding, but also a great, great person, and he had an influence on me as a young kid, just how he treated me even.”

The one thing all these coaches learned well from their relatives is just how hard it is to win the NFL's ultimate prize. Phillips noted it's been even tougher the past couple decades thanks to Tom Brady limiting those opportunities for anyone not affiliated with the seven-time NFL champ.

That makes this moment even more special.

“Really just trying to appreciate and be grateful for the opportunity,” Phillips said.