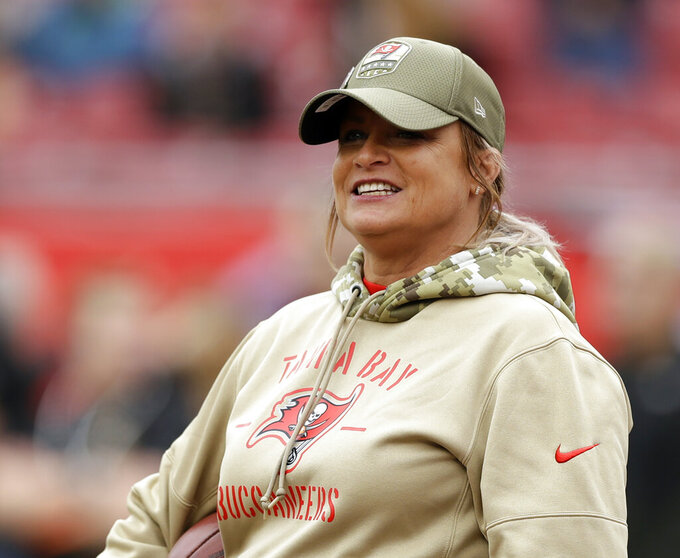 The NFL is moving closer to having its first female head coach.

It may take a few more years, perhaps another decade. However, the question is no longer if it’ll happen but when it will happen.

“We asked basically everybody that, including all the head coaches, and I think the general agreement is that it is going to happen,” Jane Skinner Goodell said on the AP Pro Football Podcast. “I think the important thing that everybody seemed to point out was that it has to happen organically and it has to be a good fit, right? It’s going to happen. That job opening is going to have that right candidate who happens to be a woman and hopefully it works. ... I do think it’s in the probably near future. I would never venture a guess as to when, but everybody, including the women, want it to happen in the right way so it’s the right person at the right time.”

Skinner Goodell, a former TV reporter who is married to NFL Commissioner Roger Goodell, is the executive producer of a new five-part docuseries from NFL Films called “Earnin’ It.” The series highlights the careers of some of the most powerful women working in the league. The first episode premieres Sunday on Peacock.

In 2020, Katie Sowers became the first woman to coach in a Super Bowl. She was an offensive assistant for the San Francisco 49ers in their loss to Kansas City.

“The pace of change with bringing smart football minds who happen to be female into the game has been really, really rapid,” Skinner Goodell said. “I’m a former reporter and I just felt like somebody needed to chronicle this because it’s such a great story for the NFL. It’s so different to think about women in such a wildly male-dominated industry. But also, I feel like if you’re in a different industry, you might look at it and say, I would like to make some change and bring more diverse voices, a broader range of voices into our company or our team, or whatever it might be.”

“I am honored to be a part of something so special that will undoubtedly be meaningful to so many people,” Ciara said. “I am awe-inspired by their incredible stories and am grateful to be part of sharing them with the world.”

Buccaneers coach Bruce Arians, Buffalo Bills coach Sean McDermott, Hall of Fame cornerback Deion Sanders and New York Giants running back Saquon Barkley are among many men who talk about the impact women have had on football.

Arians realized in the early 1990s that women deserved an opportunity to coach in the NFL when he met Dot Murphy, an assistant at Hinds Junior College.

“I used to clinic with them all the time and she was one hell of a coach, so I knew it back then,” Arians said. “It was just who was going to open the door. That was going to be the thing.”

Arians and other prominent coaches helped kick that door down. Washington coach Ron Rivera shares a story in one of the episodes about standing up at a league meeting and telling owners they should consider hiring female coaches.

“You can’t even quantify the impact that has,” Skinner Goodell said about the support from coaches.

Susan Tose Spencer was the NFL’s first and only female general manager, with the Eagles in the 1980s. Her father, Leonard Tose, owned the team back then.

In baseball, Kim Ng is general manager of the Miami Marlins.

“The biggest issue was, as of a few years ago, there was no way for women to get in the league,” Skinner Goodell said. “So the creation of a pipeline that there is a way that a really smart, talented football woman can get an opportunity to meet a Ron Rivera who might take a chance on her or Kevin Stefanski or Sean McDermott, or whoever it may be, the fact that pipeline has been created, I think that probably was the biggest challenge. And now that it’s there and it’s getting more robust, I think we’re going to see this pace of change continue, probably.”

Sam Rapoport, the NFL’s senior director of diversity, equity and inclusion and a former professional quarterback, created that pipeline by establishing the NFL’s Women’s Careers in Football Forum in 2017.

Next stop: a female head coach in the NFL.