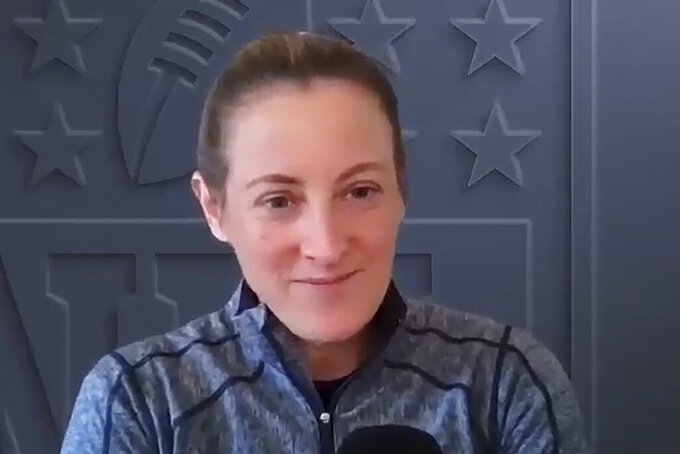 Sam Rapoport, NFL senior director of diversity, equity and inclusion, smiles during an interview over Zoom from New York on Nov. 10, 2022. Rapoport fell in love with football the first time she held a ball and threw a spiral as a 12-year-old growing up in Canada. Rapoport ended up becoming a professional quarterback in a women’s tackle football league and has spent two decades working to expand career opportunities for women in the sport. (AP Photo)

There used to be a time when the NFL thought appealing to female fans meant pink jerseys and bedazzled apparel.

Not anymore. Those stereotypes are long gone.

The league has made it a priority to increase opportunities for women in every aspect of the sport from front-office positions to the sidelines. The NFL had the most women in on-field assistant coaching roles at the beginning of the 2022 season with 15 than any men’s professional sport.

“I think something we’ve done well in the past couple of years that I feel passionate about, and we speak to thousands of women who love the sport, is we don’t want to be othered as football fans,” said Sam Rapoport, the NFL’s senior director of diversity, equity and inclusion. “We don’t want to have like bedazzled cooking tools or we don’t need to wear Russell Wilson’s jersey in pink. I mean, some people do like that, and I don’t want to take that away from them. But there’s something you lose when you other fans.

Rapoport, a former professional quarterback in a women’s tackle football league, has spent two decades working to expand career opportunities for women in the NFL. She points to the stats to prove her point.

Women and girls made up 46% of the NFL fanbase (ages 8-plus) in the U.S., amounting to 84 million female fans in 2021, according to data from last year’s SSRS Sports Poll. The gender balance is similar among the next generation of fans, with 45% of the NFL’s fanbase under age 35 being women and girls. Also, 56% of women and girls ages 8-plus in the U.S. are fans of the NFL, making the NFL the No. 1 league among this demographic.

They're not just watching. They're playing, too. Football participation among girls has grown, In high schools, 24% more girls are playing football — tackle and flag — now compared to 2014-15.

“The numbers don’t lie, right?” Rapoport said on the AP Pro Football Podcast. “Half of our fanbase are women and they’re avid fans. They understand the sport and we just need to make sure that we continue to represent this sport, that it belongs to everyone and not just have women on the side in our commercials where they’re cooking or making team snacks or things like that. Like, no, we’re in front of the television screaming our heads off that there was a Pick-6 in that game. And so that is the evolution. I’m proud that we’ve really done a great job on that.”

Rapoport created the NFL Women’s Forum in 2017 to connect qualified women to football operations positions in professional and college football programs. More than 225 females have been hired for various positions since the forum started in 2017.

“An interesting part of the NFL Women’s Forum that I think a lot of people don’t know is it’s not like a rah-rah women’s empowerment forum,” Rapoport said. “You could put any 40 people in that room and everything would be applicable to them. So we don’t we don’t start out the music with: ‘I am woman, hear me roar.’ And, we don’t have pink streamers. There’s a place for that. I also don’t want to take pink away from little boys and girls in any gender who do want a pink Tom Brady jersey. That’s cool.

“But the truth is that what we’re trying to do is we don’t want to subtly show women that there is a place for them. You need to organically show everyone that everyone belongs. And so that’s why I feel really passionate. I push back a lot with the Women’s Forum that it’s not very women heavy. It just so happens at 40 women in the room. We do not ignore that fact. We work to develop them and we talk about the challenges that women have. But I think it’s very important when you’re creating gender equity programs to ensure that you’re not othering by mistake, and a lot of programs do that.”

As the number of women in the NFL continues to rise, there may come a point when it’s considered standard operating procedure for teams to hire female executives and coaches.

For now, women are making it known they're here to stay. They've made the NFL a women's game, too.

“It doesn’t feel like a big deal that I’m a woman,” Katie Sylvan said about her role as the Los Angeles Chargers director of football administration. “I do look forward to that.”