Analysis: 'No lead is safe' more than a cliche this season 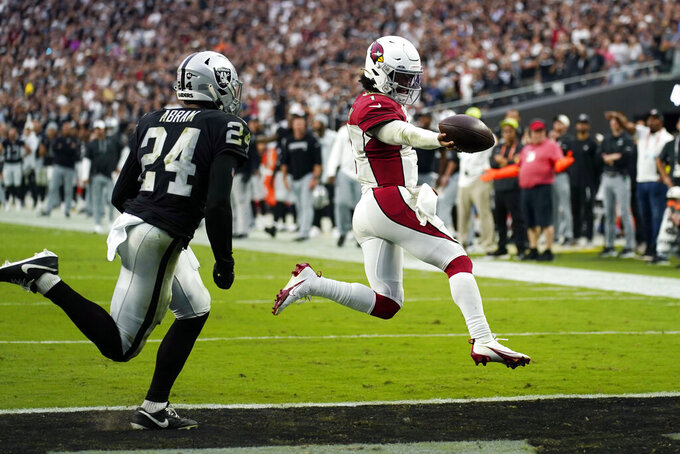 Arizona Cardinals quarterback Kyler Murray runs in for a touchdown as time expires during the fourth quarter of an NFL football game against the Las Vegas Raiders Sunday, Sept. 18, 2022, in Las Vegas. (AP Photo/John Locher)

“No lead is safe in the NFL” is more than a cliche this season.

Three teams overcame fourth-quarter deficits of at least 13 points to win last week for the first time in 30 years. The Arizona Cardinals and Miami Dolphins made history by rallying from 20-point halftime deficits to win on the same day for the first time.

Big comebacks and close finishes have become a trend. Already, 12 games were decided by three points or fewer, the most through the first two weeks. Eight teams have overcome a deficit of at least 10 points to win or tie.

“It’s hard to blow a team out in our league,” Buffalo Bills defensive coordinator Leslie Frazier said. “You have to go into it believing it’s going to be a one-score game no matter what the halftime score is and sometimes (regardless of) what’s going on in the third quarter. You have to be prepared to finish the game.”

The Bills have enjoyed lopsided victories over the Los Angeles Rams and Tennessee Titans because their offense stayed aggressive and the defense never let up.

Kyler Murray and the rest of Arizona’s offense found that rhythm after trailing Las Vegas 20-0 at halftime. Murray had a spectacular second half and the Cardinals won on a fumble return in overtime.

“The issue for us is never playing hard, it’s just about executing,” Murray said.

For Raiders defensive coordinator Patrick Graham, the dramatic turnaround was simple to explain.

”(The) reason why they found success is their players performed,” Graham said. “They did a good job. Guys made plays for them. ... We all have a job to do. It always comes down to performance and they did a good job and made plays when they needed it, and they won the game.”

Teams that execute better down the stretch often win. Coaches who make necessary adjustments in the second half give their team an opportunity to overcome early mistakes and rally.

Having a quarterback who remains calm and instills confidence in his teammates helps. Tua Tagovailoa threw four of his six touchdown passes in the fourth quarter to bring Miami back from a 35-14 deficit at Baltimore.

“That last drive we had, it really showed me who he is as a leader, getting everybody inside of the huddle, telling guys: ‘Make sure you run the ball to the official or hand it to (center) Connor (Williams),’” Dolphins receiver Tyreek Hill said. “Just small things to save time, and be able for us to go down the field and make a play.”

“You don’t let doubt and negativity overtake you,” Tebow said on the AP Pro Football Podcast. “When you’ve had a tough first two or three quarters, whatever it is, it’s so easy to get crevices in between you and other players. ‘Oh, it’s my fault, it’s your fault, it’s our fault.’ But continue to bring people in and not let a wedge come between you and don’t let the negativity, don’t let the doubt creep in. So, OK, these are the reasons that we haven’t had success. It’s because of X, Y and Z. And this is the solution. Come together. Here we go. If we make these adjustments, we’re OK.”

The NFL has always preached parity. The first two weeks have lived up to it.

“The reality of the National Football League is that the game is never over until it’s over,” Raiders coach Josh McDaniels said.