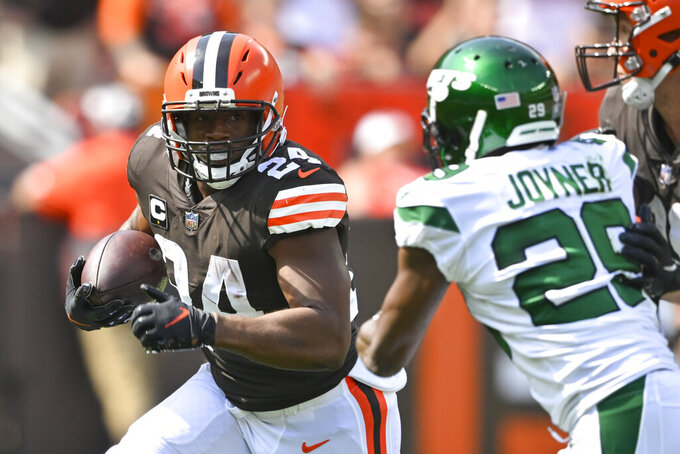 Kevin Stefanski forgot to call “No Mas!” and Nick Chubb's heroics from two years ago escaped his memory, too, as he deked a defender and scooted into the end zone with his third touchdown run Sunday.

That 12-yard score put the Browns up 30-17 on the Jets just before the 2-minute warning, but what followed was one of the biggest collapses in NFL history, one that could have been avoided had Stefanski rememered to remind Chubb to give himself up if he got the first down at the 2 so they could run out the clock.

That's what happened on Nov. 15, 2020, when Chubb was hailed the hero for shunning personal stats, the point spread and a sure score when he veered out of bounds just shy of the goal line after a 59-yard scamper so the Browns could close out a 10-7 squeaker over the Texans with a couple of kneel-downs.

Chubb had a clear path to the end zone that day but with the Texans out of timeouts, he heeded Stefanki's admonition — code named “No Mas” — to give himself up if he got the first down so they salt away the win.

“That’s a scenario where that is on me to communicate that to the huddle,” said Stefanski, the Browns' head coach since 2020. “We have done that before. Having said that, we need to close that game out.”

It took an astonishing series of events for that not to happen Sunday after Chubb's third TD run. It all started with a missed extra point by rookie Cade York. After the 2-minute warning, York kicked off and Joe Flacco threw TD passes of 66 and 15 yards sandwiched around a perfectly executed onside kick and Ashtyn Davis' interception of Jacoby Brissett in the closing seconds sealed the amazing rally.

So, Chubb's third touchdown turned into a game-losing play just like Todd Gurley had in Atlanta's 23-22 loss to Detroit two years ago. Gurley knew what was happening and tried to go down but his momentum carried him across the goal line, leading Lions linebacker Jamie Collins to signal touchdown as his teammates celebrated around him.

Move over Gurley, it's Chubb's turn to lament the game-losing touchdown run.

“It shows you can't take anything in this league for granted," Brissett said on a weekend in which the Ravens blew a 21-point fourth-quarter lead over the Dolphins and the Raiders frittered away a 20-0 halftime lead in a 29-23 overtime loss to the Cardinals.

Sometimes the most notable takeaways on an NFL weekend are the giveaways.

Byron Murphy Jr. scooped up Hunter Renfrow’s fumble and returned it 59 yards for a touchdown with 3:51 left in overtime to cap the Cardinals' phenomenal comeback at Las Vegas.

Arizona was still trailing 23-7 midway through the fourth quarter when Kyler Murray ran around for an astonishing 86 yards on a 2-point conversion that made it an eight-point game. Murray rushed for touchdown as time expired in regulation, then hit A.J. Green with the 2-point pass to tie it at 23.

If you think Murray's 86-yard scamper on the 2-point conversion was long, consider this: according to NFL Next Gen Stats, Baltimore's DBs ran a total of 6,131 yards on pass plays Sunday as Tagoviola ran the Ravens ragged.

He threw for 469 yards and six touchdowns, four of which came during a spectacular fourth quarter as the Dolphins rallied for a 42-38 win after trailing 35-14 with 13 minutes remaining.

Tyreek Hill and Jaylen Waddle combined for 22 catches, 361 yards and four touchdowns for Miami. The speedsters are the first pair of teammates in league history to record at least 10 receptions for 150 or more yards and two TDs in the same game.

Even without that kind of secondary-scorching firepower, no lead is safe as the Raiders and Browns proved Sunday.

With contributions from AP Sports Writer Tom Withers in Cleveland.