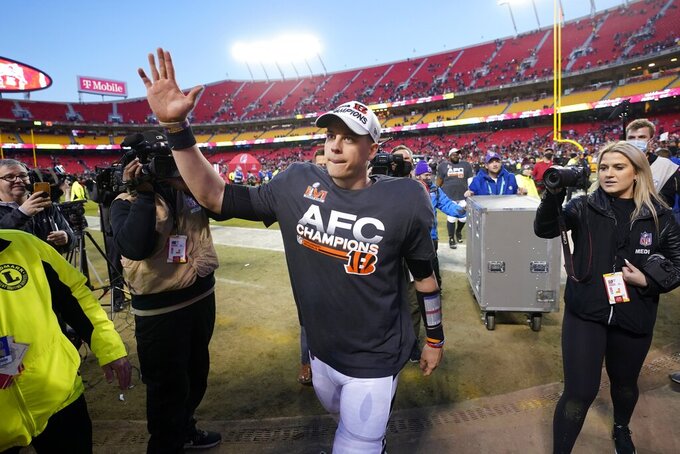 Cincinnati Bengals quarterback Joe Burrow waves to fans as he walks off the field after the AFC championship NFL football game against the Kansas City Chiefs, Sunday, Jan. 30, 2022, in Kansas City, Mo. The Bengals won 27-24 in overtime. (AP Photo/Paul Sancya)

LOS ANGELES (AP) — It's difficult if not impossible to downplay the importance of having a top-level quarterback to win a Super Bowl. Or even get to it.

Sure, there are exceptions such as Jared Goff, Nick Foles and Rex Grossman, though Foles played like a superstar in early 2018. Generally, the biggest names, from Brady to Mahomes, Manning (Peyton) to Manning (Eli), Wilson to Roethlisberger are the biggest achievers.

Yet this Sunday's Super Bowl features a QB considered more of a talented journeyman, Matthew Stafford, and a second-year phenom whose first pro season was shortened by a knee injury, Joe Burrow. That's not exactly the script we expect.

For a dozen seasons in Detroit, Stafford did his best, but other than Hall of Fame receiver Calvin Johnson, he simply didn't have the help. He was lumped, probably unfairly given his work this season for the Rams, with the likes of Kirk Cousins, Alex Smith and Tony Romo.

Note that only one of them reached a Super Bowl, Smith as a backup to Colin Kaepernick in the 2012 season.

Stafford deserves a re-evaluation, particularly if he guides the Rams to their first championship since Kurt Warner, another Hall of Famer, did so in 1999 while the team was based in St. Louis.

“We went out and got him because we thought it was a chance to be able to get a great player of his magnitude,” Rams coach Sean McVay says, never for a second regretting sending Goff, the top overall draft choice in 2016, and a slew of high picks to the Lions. “What he’s done, he’s elevated everybody around him. He’s made me a better coach. He’s made his teammates better.”

Seems that way. It's a path not often seen in the NFL. Maybe you have to go back to Jim Plunkett or Joe Theismann or Trent Dilfer to find an equivalent.

Burrow's path has been a bit more familiar, blazed this century by Tom Brady and Ben Roethlisberger, Russell Wilson and Patrick Mahomes. Major success early in their careers, with rings.

That road has been made more passable to young QBs for a variety of reasons. The college game has become even more wide open than the NFL, so they are more pro-ready signal callers. They also get on the field so much earlier than, say, when Aaron Rodgers spent three seasons behind Brett Favre in Green Bay.

The salary cap and contract situations also play into finding out as soon as possible about a quarterback. That usually means in his first three NFL seasons, though Justin Herbert and Burrow didn't need nearly that long.

But consider the predicaments for both New York teams: The Giants still don't know what they have in injury-prone Daniel Jones after three years, and the Jets never did find out about Sam Darnold. Cleveland is uncertain — or should be — if Baker Mayfield is the guy after four years. Same for Miami and Tua Tagovailoa.

Burrow is the real thing. Ask nearly anyone on any NFL team about him and the praise flows.

As it does, naturally, from the Bengals, who might be a year or so early in their arrival to the big game, but certainly have set the foundation for a champion.

“The leader in the huddle is just a stone-faced killer, like, ’Yeah we’re going to go score this, we’re going to get the 2-point conversion afterward, and boom, that’s it," seven-year veteran tight end C.J. Uzomah, whose career took off in 2021 with Burrow. "You’re like, ‘nice.’ Like I love hearing that. Now I’m going to go back to doing what I need to do.

“So yeah, I mean he’s the person, he’s the glue. He is the glue to this entire team, especially as an offense of just this is how it’s going to be, business as usual. Let’s go down and put points on the board. I don’t know how to put into words exactly other than what I just said, but he’s that guy.”

The NFL could use “that guy,” too. Brady and Roethlisberger hung it up a year after Drew Brees and Philip Rivers retired, two years after Eli Manning left the sport. Other QB icons — Rodgers, Wilson, Matt Ryan, Stafford — are on the far side of their careers.

So there's plenty of room for Burrow and Herbert, Josh Allen and Kyler Murray. That's a good thing.