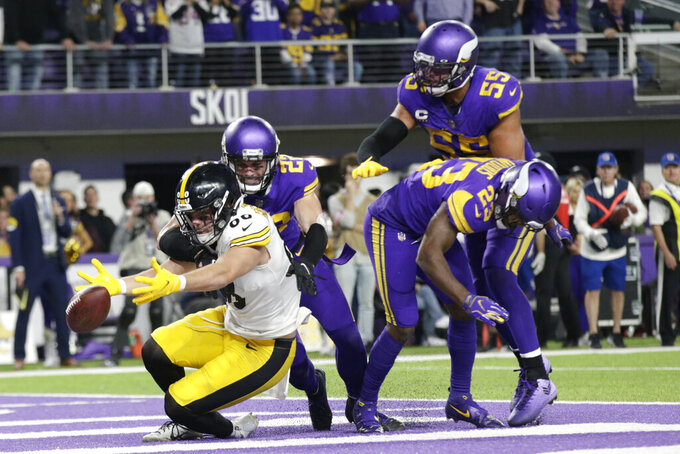 MINNEAPOLIS (AP) — Never mind the comeback the Pittsburgh Steelers made in the second half.

Mike Tomlin had seen enough before that, and the 15th-year coach was so upset he started benching players in search of a spark.

The defense gave up 176 yards rushing to the Minnesota Vikings in the first half. The offensive line allowed four sacks of Ben Roethlisberger before halftime.

With his team's season on the brink, Tomlin took action. He benched receiver Chase Claypool following a taunting penalty in the first quarter. Inside linebacker Joe Schobert later found himself on the bench, with rookie Buddy Johnson taking over.

Fourth-year linebacker Marcus Allen, who had only played special teams all season, also got his first snaps on defense.

“We will not be bashful about turning the stones over,” Tomlin said after Pittsburgh’s 36-28 loss Thursday night, when another fourth-quarter comeback fell short.

Tomlin said more changes could be coming. His biggest points of emphasis: the offensive and defensive lines that were manhandled as Minnesota took a 23-0 halftime lead.

“We’re not whipping enough tail,” Tomlin said. “We’re not striking enough. We’re not making the pile fall in the right direction enough. So, I’d be remiss, I’d be doing that group a disservice, if I didn’t look at all options. Buddy’s an option that has worked, so we played him some.”

Roethlisberger threw for 240 yards and three touchdowns in the second half, but Pittsburgh fell behind 29-0 and surrendered 242 yards rushing to the Vikings. Dalvin Cook ran for 205 yards, the most the Steelers have allowed since Jacksonville’s Fred Taylor rushed for 234 in 2000. That is the most ever by an opposing rusher against the Steelers.

A proud franchise built on its stability and menacing defense, Pittsburgh entered play giving up 4.8 yards per carry to opponents, the worst mark in the NFL.

Cook, questionable before the game because of a shoulder injury, gashed the Steelers repeatedly. He ran through wide-open holes, and his first three carries went for 54 yards.

“First half was horrendous,” defensive end Cameron Heyward said. “Guys weren’t filling. We weren’t getting off blocks. We weren’t tackling. You name it, we did it wrong.”

Star outside linebacker T.J. Watt left the game in the second quarter with a groin injury, and linebacker Alex Highsmith was lost to a knee injury.

“It’s not an excuse,” Heyward said. “Every man that signs up in that locker room to play football has a job to do, including myself. If we can’t get the job done, we shouldn’t be in there.”

Tomlin agrees, and he could be looking elsewhere along the lines before the Steelers host the Tennessee Titans in 10 days.

“We were JV again tonight and I’m talking up front on both sides,” he said. “We've got to be better than we were. We’ll turn over every stone to do that. We've got a long week coming up between this and our next one. We’ll make good use of that time and assess not only what we’re doing, but who we’re doing it with.”