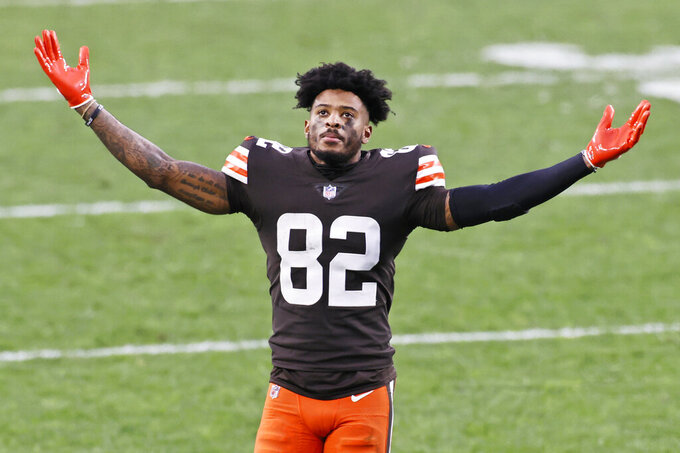 CLEVELAND (AP) — The Browns continued to upgrade their secondary by agreeing to terms on a contract with free agent cornerback Troy Hill, a person familiar with the negotiations told the Associated Press on Thursday.

Cleveland needed depth and versatility at the position and found both in Hill, who will get a four-year deal, said the person who spoke on condition of anonymity because financial details of the package were still being finalized.

Hill has spent the past five years with the Los Angeles Rams. He'll be reunited in the Browns' secondary with safety John Johnson III, who signed a three-year, $33.75 million contract with Cleveland on Wednesday.

The Browns have one of the AFC's best starting cornerbacks in Denzel Ward, and the team is hoping projected starter Greedy Williams is back after missing last season — his second with Cleveland — due to a shoulder injury sustained in training camp.

Hill gives the Browns some depth as well as a player who can cover in the slot. Cleveland lost depth when cornerbacks Terrance Mitchell and Kevin Johnson signed elsewhere as free agents this week.

Natson signed a one-year deal with Cleveland in 2020, but had it cut short when he got hurt returning a punt in a Week 3 win against Washington. The Browns never got what they wanted out of their return game and are bringing back the 27-year-old speedster for another year.

Natson is also a deep threat for the Browns, who are hoping star receiver Odell Beckham recovers from his torn knee ligament. Reports on Beckham during his recovery have been positive.

On Wednesday night, the Browns agreed to terms on a one-year, $2.3 million contract with wide receiver — and fan favorite — Rashard Higgins. The 26-year-old caught 39 passes and scored four touchdowns last season, and has a strong on-field connection with quarterback Baker Mayfield.

The Browns continue to look for help on defense, and Thursday they hosted free agent linebacker Anthony Walker, who spent the past four seasons with Indianapolis. He's started 46 games over the past three seasons.

Walker is a possible replacement for B.J. Goodson, who is a free agent; it's not yet known if the Browns will re-sign him. He was solid in his first season with Cleveland, handling the defensive signal calls for coordinator Joe Woods.

Defense is a priority this offseason for general manager Andrew Berry, and since Monday the team has agreed to contracts with safety John Johnson III and defensive end Takk McKinley. The team has also re-signed linebacker Malcolm Smith, a Super Bowl MVP for Seattle in 2014.