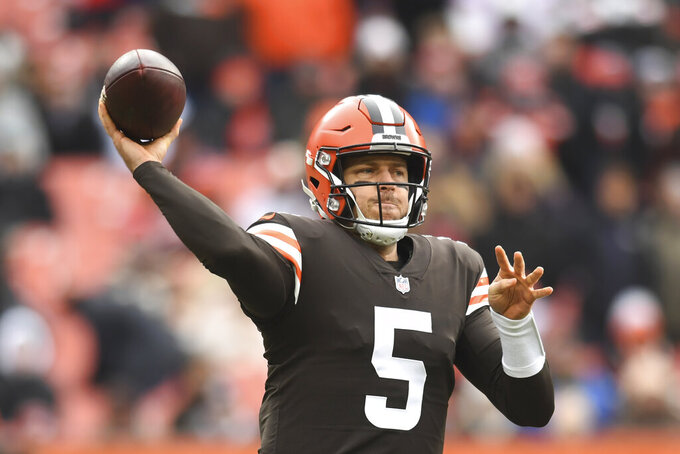 FILE -Cleveland Browns quarterback Case Keenum throws during the first half of an NFL football game against the Cincinnati Bengals, Sunday, Jan. 9, 2022, in Cleveland. While they wait to welcome Deshaun Watson, the Browns have traded backup quarterback Case Keenum to Buffalo and signed free agent QB Jacoby Brissett, a person familiar with the deal told The Associated Press on Saturday, March 19, 2022. (AP Photo/Nick Cammett, File)

The Browns are sending Keenum to the Bills for a seventh-round draft pick in 2022, said the person who spoke on condition of anonymity because the teams have not announced the trade.

Keenum spent the past two seasons behind Baker Mayfield in Cleveland. But with the Browns trading for the controversial Watson — the deal with Houston is expected to become official Sunday — and set to deal Mayfield, the team decided to completely change the quarterback situation and move on from Keenum as well.

The 34-year-old Keenum received a $1 million roster bonus Friday, and the Browns reworked his contract to complete the trade with Buffalo. Keenum was scheduled to make $6.6 million in 2022 — a steep price for a backup — and the team decided to ship him to the Bills instead.

Buffalo was in the market for a No. 2 quarterback behind Josh Allen after Mitchell Trubisky, who was the Bills' backup last season, signed with the Pittsburgh Steelers this week.

He gives the Browns a younger backup and one with experience. Brissett could begin next season as Cleveland's starter, depending on if the NFL disciplines Watson, who was accused by 22 women of sexual assault.

A grand jury didn't indict Watson on the criminal complaints, but he also faces civil lawsuits.

On Friday, Watson stunned the NFL world by changing his mind after initially rebuffing the Browns and waiving his no-trade clause to go to Cleveland, which is sending Houston three first-round picks over the next three years and more.

Watson became available last week after the grand jury's decision. Cleveland outbid at least three other teams for the three-time Pro Bowler by offering him a $230 million fully-guaranteed contract.