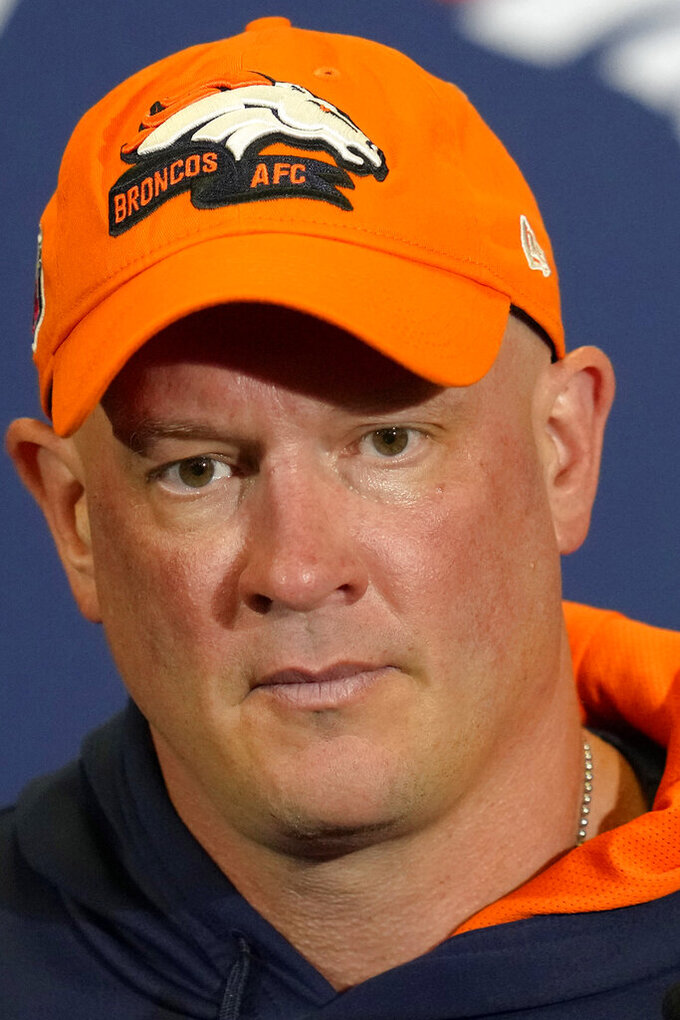 DENVER (AP) — First-year Denver Broncos head coach Nathaniel Hackett is handing over offensive play-calling duties to quarterbacks coach Klint Kubiak, according to a person with knowledge of the decision.

The person, speaking to The Associated Press on condition of anonymity because Hackett hasn't publicly disclosed the handoff, confirmed a report by the NFL Network that Hackett informed his players that Kubiak would take over as play-caller beginning Sunday when the Broncos (3-6) host the Las Vegas Raiders (2-7).

The Broncos have the league's worst offense and are averaging fewer than 15 points a game behind struggling quarterback Russell Wilson, who is mired in the worst season of his career following his trade from Seattle.

Exacerbating matters is an injury epidemic that has sidelined left tackle Garett Bolles (leg), top receiver Tim Patrick (ACL) and No. 1 running back Javonte Williams (knee), who are among a league-high 15 Broncos on injured reserve.

On Sunday, they also will be without receivers KJ Hamler (hamstring) and Jerry Jeudy (ankle).

Up until this week, Hackett had declined to relinquish play-calling duties despite the team's stubbornly ineffective offense, which has negated a defense that leads the league in several categories and has kept the team in every game this season.

The Broncos are hoping for a turnaround like the Eagles had when rookie head coach Nick Sirianni turned over play-calling duties to offensive coordinator Shane Steichen at midseason last year. Philadelphia won six of its last eight games and started this season 8-0.

This is the second major move by Hackett, who received a vote of confidence two weeks ago from new team owner/CEO Greg Penner.

Hackett recently incorporated 7-on-7 drills at practice to help Wilson and his receivers find their rhythm. He didn't use that staple drill in training camp, saying it wasn't “ real football.”