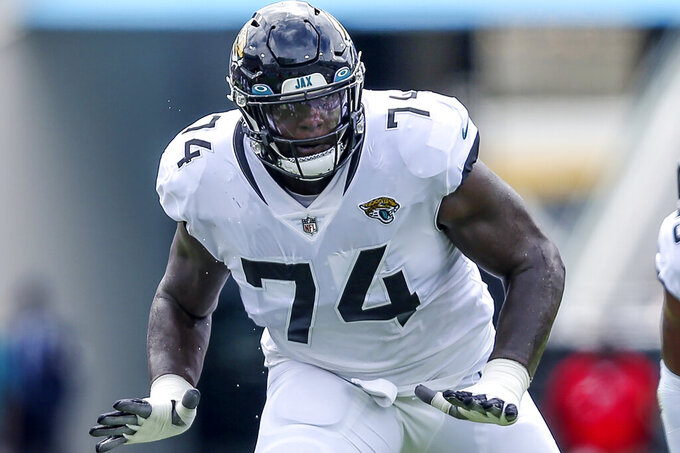 JACKSONVILLE, Fla. (AP) — The Jacksonville Jaguars essentially ruled out taking a left tackle with the top pick in the NFL draft by agreeing to terms with veteran Cam Robinson on a three-year extension Wednesday.

Robinson's new deal totals just shy of $54 million, roughly $18 million a year, according to a person familiar with negotiations. The person spoke to The Associated Press on condition of anonymity because neither side made details public.

Robinson signed his franchise tender two weeks ago, guaranteeing him $16.7 million next season. But he ended up getting more from the extension. The move also means Jacksonville has little need to draft North Carolina State's Ikem “Ickey” Ekwonu, Alabama's Evan Neal or Mississippi State's Charles Cross at No. 1.

Jacksonville is expected to choose between a pair of pass rushers, either Georgia's Travon Walker or Michigan's Aidan Hutchinson. Walker is the betting favorite, according to FanDuel Sportsbook.

Robinson, a former Alabama standout, has started 61 games over five seasons since Jacksonville drafted him with the 34th overall pick in 2017. But he’s been far from one of the league’s best blind-side protectors.

Using the franchise tag on him for a second straight year was a surprise move considering the Jaguars drafted Stanford left tackle Walker Little with the 45th overall pick last year in hopes of pairing him with quarterback Trevor Lawrence for the foreseeable future. Little started the final two games of the 2021 season and played well, leading some to believe general manager Trent Baalke would move on from Robinson.

But with Robinson back for a sixth season, Little will compete with Jawaan Taylor at right tackle. Nonetheless, the Jags are planning to address the offensive line in the draft.

But holes remain. The team is expected to use at least two of its 12 draft picks to bolster a line that allowed Lawrence to get sacked 32 times in 2021. It just won't be the first one.