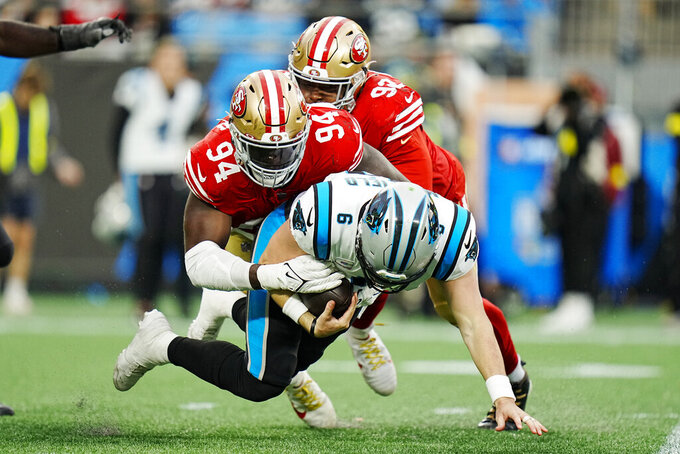 CHARLOTTE, N.C. (AP) — Carolina Panthers quarterback Baker Mayfield has been diagnosed with a high left ankle sprain and is expected to miss several games, according to a person familiar with the situation.

The person, who said Mayfield is expected to get a second opinion, spoke to The Associated Press on condition of anonymity Monday because the team has not yet released details of the injury.

The NFL Network was first to report the news.

P.J. Walker is expected to start Sunday against the Los Angeles Rams.

Last year's starting quarterback Sam Darnold remains on injured reserve after he suffered a high ankle sprain in the preseason and is still several weeks away from being able to return.

Mayfield was injured in the first half of Carolina’s 37-15 loss to the San Francisco 49ers on Sunday, a loss which resulted in coach Matt Rhule being fired on Monday by owner David Tepper.

Steve Wilks will serve as Carolina's interim head coach moving forward with Rhule finishing his tenure in Carolina with an 11-27 record and having lost 11 of his final 12 games.

Mayfield stayed in the game Sunday and led a touchdown drive in the second half for Carolina.

He was replaced late in the game by Walker and then showed up at his news conference with a boot on his left foot.

“Somebody landed on the ankle,” Mayfield said Sunday. “It didn’t feel too good.”

Mayfield is 1-4 as a starter this season and ranks last in the NFL in total quarterback rating, completing just 54% of his passes for fewer than 200 yards per game with four touchdowns and four interceptions.

When asked if this has been the roughest patch of his career, Mayfield responded, “I have a walking boot on, my leg is not cut off so I will be all right. I would love to be in a better position record-wise but you keep pushing forward. It’s not time to put your head down and give up.”

Walker is 2-0 as Carolina’s starting quarterback.